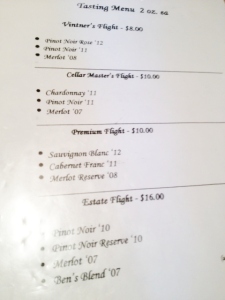 After an excursion to Westhampton Beach for an art show, and a visit to a friend’s house for a smaller art show, it was time for a different type of art, so off we went to McCall’s Winery.  Mr. McCall does treat wine-making as an art, concentrating for the most part on producing some of the best reds around, with only a few whites.  He and Mrs. McCall were both on hand, which was fortunate, as there was quite a crowd, including at least one bachelorette party (we could tell by the white veil on her head…).  As Mr. McCall had told us on an earlier (much less crowded) visit, he used to be a Coca-Cola distributor, but then became interested in wine making.  In addition to his vines, he also tends a herd of grass-fed cattle one can see munching said grass in a field next to the winery, and whose meat can sometimes be bought at Love Lane Market.  I described the tasting room, in a repurposed stable, in an earlier entry, and most people are out on the grass at picnic tables.

The tasting menu now offers four levels of flights:  Vintner, at three two-ounce tastes for $8; Cellar Master, with three for $10; Premium, at three tastes for $10; and Estate, at four for $16.  We decide to share two flights, the Premium and the Estate.  Mrs. McCall is serving us, and she carefully monitors the order of our wines, interspersing the two flights for the best path through the tastings.  As a result, I have marked the wines from the Estate flight with *. 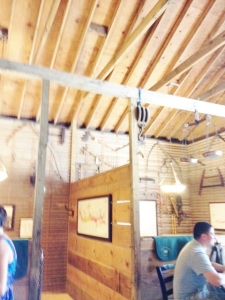 We start with the only white we’ve tasted at this winery, and it is quite pleasant, with aromas of honeysuckle and citrus, and a taste that combines wildflower honey and kumquat, with some minerality.  It is somewhat tart.  Mrs. M. admits she’s never tasted a kumquat, and we decide this does not taste like the candied ones one gets, but rather like a fresh one. 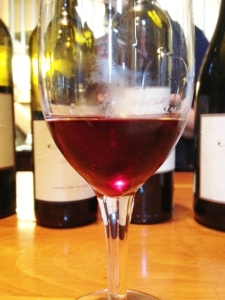 We thought we’d be moving on to the Cab Franc, but Mrs. M. suggests we have this instead, as it is fruitier.  And indeed it is.  “Mmmm,” we both say.  The day before we had bought some lovely purple plums at Briermere (along with the obligatory pie), and there is a flavor here that reminds me of them, plus a hint of cinnamon.  Robust, they call it.  Yes, indeed.

I love doing this—tasting two wines from the same varietal in succession.  So interesting.  This one was aged an additional six months in French oak, and we overhear Mr. McCall saying that 2010 was the best year for his wines so far.  This is really good, and right up there with other high-priced wines in its taste and complexity.  It has much more depth than the other Pinot Noir, with aromas of coffee and chocolate and lots of dark fruit.  I bet you could cellar this one.

Now we get the Cab Franc, which is our least favorite of the day.  We smell a brambley aroma, and some tastes of blackberry, but also a bit of an olive taste, which is somewhat off-putting.

Poetically, my husband compares the aroma to the woods at dawn, evoking memories of when we used to go camping, and I would step out of the tent and inhale that dewy scent.  As we agreed the last time we were here, this is definitely better than most North Fork Merlots, with very cherry tastes and good tannins and structure.  Buyable, though we don’t buy any this time.

We can see why McCall’s began their wine-making with the ’07 vintage, since it is certainly better than the ’08.  This one has a bit of the barnyard smell and taste one often finds out East, and is a light wine with some pepper at the end.  Perhaps with more time…

This Bordeaux blend is named in honor of their winemaker, who sadly passed away.  However, this is quite a legacy.  The blend is 60% Merlot, 25% Cabernet Franc, 10% Petit Verdot, and 5% Cabernet Sauvignon.  We detect scents of cedar and forest, with lots of tastes of berries and plums, plus some chocolate.  I could definitely see cellaring this one. 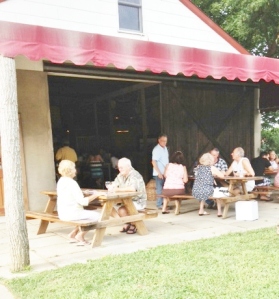 Mr. McCall chats with his guests.

Reasons to visit:  some of the best reds on Long Island, the chance to chat with Mr. McCall, who is quite enthusiastic about his wines; Ben’s Blend and the 07 Merlot; a pleasantly rustic setting. 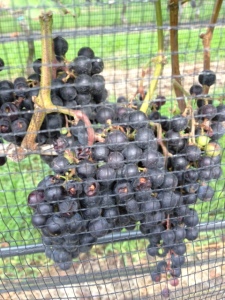 Grapes protected from the birds with netting