“Has it been that long?!” exclaimed Jenny, when we admitted that we hadn’t been there since August of 2012.  If you want a truly personal experience at a winery, Waters Crest is one of the places to go.  Despite its unfortunate location—in a commercial strip on Sound Avenue and Cox Lane, just around the corner from the Southold Transfer Station (a.k.a. town dump, with its complex odors of rotting garbage and recycled paper)—the tasting room is quite cozy and the wines worth trying.

Jim Waters does not have his own vineyard, and so buys his grapes from North Fork vineyards, plus Riesling grapes from upstate, near Seneca Lake.  However, according to his web site he “hand chooses” the grapes, and he is certainly very hands-on when it comes to making the wines.  His general style seems to be to go for dry wines, which we tend to like.

The tasting menu lists seven wines, three whites and four reds, and you can taste all of them for $15.  In addition, if you buy four bottles of wine your tasting is free.  We opted to share a tasting, and noticed that the wines are served in Reidel glasses, a luxury touch that Jenny admitted made her a bit anxious when it came time to hand dry them.  You can also buy a few wine-related gifts, including handsome cloth wine gift bags hand-made by Jenny’s mother.  We also learned that we just missed a chance to visit with Jim’s father, who was hanging out in the tasting room during our last visit.  As I said, it’s a personal experience!

Jenny packs the wines we bought.

This is their steel-fermented Chard, with typical aromas of apple, pear, and grass.  We taste a lot of lemon—perhaps too much lemon.  Not a wine for sipping, though it might be better with food.

After steel fermenting, this one spends two months in oak to mellow it a bit.  We can sense a touch of that caramel, but it is not too oaky.  This is also dry and rather light, with lots of green apple tastes.  In a nice touch, Jenny rinses the glass with a drop of the new wine before pouring the taste.

Jenny agrees with us when we decide this is our favorite of the whites.  The aroma is very flowery, with lots of honeysuckle, as is not uncommon with upstate fruit.  However, it avoids the over-sweetness I often sense with upstate grapes, and has a pleasant minerality and citrus taste.  It would be great with oysters!  Time for a new glass as we switch to the reds. 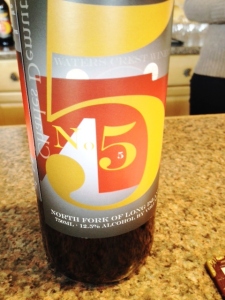 As soon as I see the label I exclaim that it reminds me of the famous painting by Charles Demuth of “The Great Number Five,” which was inspired by a poem by his friend William Carlos Williams.  If you look at a reproduction of the painting, you’ll see references to Demuth’s pal Williams in it.  Jenny confirms that the label was designed to evoke this painting, but the name was inspired by the idea that this is a “five days a week” wine, perfect for casual weeknight dinners.  We agree, and enjoy the blend of Merlot and Cabernet Franc, the very cherry aroma and the dry light taste.  One could have this with anything from salmon steaks to burgers.

Another typical Long Island Merlot, this has aromas of blackberry and eucalyptus and nice fruit taste, with a tart finish.

Jim Waters changes the blend on this wine from year to year, depending on which grapes he chooses.  The ’08, which was listed on the tasting menu, was a classic Bordeaux blend, but this one is 78% Merlot and 22% Cabernet Franc.  ’09 was a difficult year for red grapes.  There’s a bit of a funky aroma, but the taste is good, with plenty of fruit, and we guess it will age fairly well and end up tasting better.  Nice legs.

The Cab Franc spends 20 months in French oak, and we can taste a bit of that woody flavor.  I smell a bit of funkiness here, too, but also plenty of cherry.  It’s a nice wine, though not worth the price, we decide, though Jenny suggests that this, too, would benefit from a couple of years of bottle aging.  The reds are suffering in comparison to a very expensive French red we shared during the week with a friend, so we have to banish that wine from our memories in order to appreciate Long Island reds for themselves.

We decide to get two bottles of the Riesling and two of the “5” for everyday drinking, and then discover that the tasting is thus free.  If we had only opted for three bottles, Jenny says she would have informed us of the deal!

Reasons to visit:  an intimate, personal experience; the 2012 Dry Riesling and the “5” Red Blend; a free tasting if you buy four bottles.