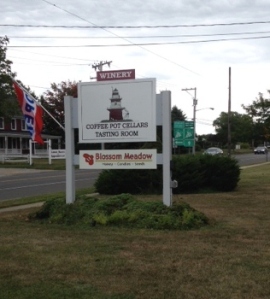 No, they don’t serve coffee here!

“Perhaps a sign that says ‘Live Bees!’ is not the best way to get people into a winery,” I suggest to winemaker Adam Suprenant, owner of Coffee Pot Cellars.  He chuckles, and notes that when people ask if he has live music he says no, but they have live…bees.  Never fear, however, the bees are behind glass, and you can observe their activity while you sip Mr. Suprenant’s lovely wines and visit with him and his charmingly chatty wife, Laura Klahre, the beekeeping owner of Blossom Meadow.

A year ago when we stopped into the tasting room it had just recently opened, and we were the only ones there.  This time there were several other couples, including some who were clearly regulars, and much of the discussion centered around the award Mr. Suprenant was to receive that night from Governor Andrew Cuomo for producing the best oaked chardonnay in New York State, his 2013 vintage (not available for tasting).  “And I didn’t even want to make a chardonnay!” he confessed to us, but more about that later.

The tasting room is a small but pleasant space that had previously housed an antique store and after that a real estate agency.  Now the simple yellow-painted space has a tasting bar and shelves filled with Blossom Meadow goods—honey, beeswax candles and crayons in various shapes, and bee-related beauty products.  Last year we bought cat-shaped candles as a gift for cat lovers we were about to visit.

Some of the gift items available

Both Mr. Suprenant and Ms. Klahre are enthusiastic and passionate about their fields, and it is fun to chat with them both about the intricacies of bee-keeping and wine making.  Did you know a bee has to visit two million flowers to make one pound of honey?

The tasting menu offers all six of their wines for $10, four for $8, or individual tastes for $2.50.  We opted for two complete tastings.

We sniff, and detect aromas of citrus and mineral or wet rock.  The taste is tart, almost grassy, with lots of lemon.  Not a wine to sip by itself, it would go well with a seafood in cream sauce dish. 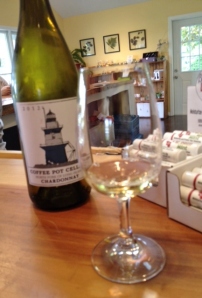 As we enjoy this very lightly oaked chardonnay, Mr. Suprenant tells us why he didn’t plan to make a chard.  “Like a cliché?” I ask (ever the English teacher), and he agrees.  But a grower from whom he buys his grapes asked him to buy some chardonnay grapes due to an oversupply, and so he gave in.  Using older oak barrels, he fermented tow clones of chardonnay for only five months, and then arrested the malolactic fermentation with sulfites.  “Butter cookies!” I say of the aroma, and then sip.  Pineapple and what Mr. Suprenant confesses he compares to Juicy Fruit gum compose the actually very good taste.  Sippable.

The grapes for this wine come from Osprey’s Dominion, where Mr. Suprenant is the winemaker (He’s been a winemaker on the North Fork for 17 years.).  Nice flowery honeysuckle aroma, not too sweet, with some tangerine flavor, this is also a sippable wine.

A nice touch—he rinses the glasses with a bit of the merlot before we taste it.  The gewürtz would overpower anything else in the glass, he notes, but I also think that sometimes when wineries rinse with water you get a taste of chlorine!  Like all his wines, this is made with grapes purchased from North Fork growers, and 2009 was a notoriously bad year, with an excess of rain.  However, this wine has turned out pretty good, with aromas of berry and no earthiness. Though I think I scent wet rags, my husband says pine forest.  Wine tasting is not an exact science! 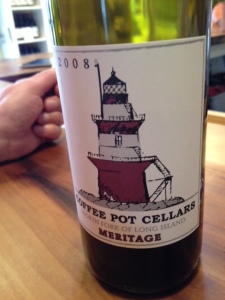 A Bordeaux blend, this version is 69% merlot, 19% cabernet sauvignon, and 6% each petit verdot and cabernet franc, according to the tasting menu which, Ms. Klahre points out, she is proud they finally have.  Complex aromas of berry, flint and a bit of smoky forest precede tastes of blackberry and herbs.  Very nice, but the next is better.

2010 is known to be a good year, and this wine proves it.  59& merlot, 23% petit verdot, 14% cabernet franc, and 4% cabernet sauvignon, this Bordeaux blend really does taste like a Bordeaux.  The aroma is brambly, with a hint of earth that is not present in the taste.  We taste blueberry and some spice and like it so much we decide to buy two bottles for the cellar, marking them 2016.

Reasons to visit: you like bees and honey and beeswax products; you enjoy talking with people about their passions; the 2012 chardonnay (and maybe the 2013), the gewürztraminer, the 2010 Meritage; Adam and Laura.

P.S.  The name refers to the lighthouse at Orient Point, which is said to resemble a coffee pot.  They do not, in fact, serve coffee at the winery!

The building was originally a house, and Adam and Laura will make you feel right at home.