Macari had been named the “Winery of the Year” at the 2014 New York Wine & Food Classic, so we were curious to see why.  According to the Classic website, the “award is presented to the winery with the best overall showing based on the level and number of awards in relation to entries.”

Macari has two tasting rooms, and on a previous try the one on Sound Avenue was too full to find a place at the tasting bar, so this time we tried the one on the Main Road.  Since it was a beautiful October day and every winery we passed seemed to have a full parking lot, we thought we’d have to put off our visit until the winter, but we were pleasantly surprised—though as we left it seemed the crowds were arriving!  Both tasting rooms are spacious and pleasant, with a nice selection of wine-related gifts and snack items.  Our servers were kept busy, but were very efficient and observant, and we never had to wait more than a moment or two for our next taste.  Also, as you will see, they noticed our seriousness about the wines and added a few extras, which turned out to be a great idea.

A view out the windows, with some of the gift items visible

The tasting menu features three options:  a white flight of four wines for $8, a red flight of 4 wines for $15, and a Vintage flight of 5 wines for $20, with a combination of whites and reds.  Since we noticed that three of the Vintage wines were included in the other two tastings, we decided to opt for one white and then one red, sharing as we went along. 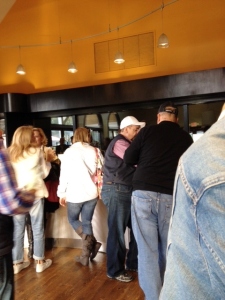 The tasting bar was crowded, but the servers did a good job of taking care of everyone.

As usual, the tasting started off with their lightest white, a lemony and tart sauvignon.  The night before we had had an excellent Italian sauvignon, so we were making comparisons.  The Macari had, we felt, too little fruit taste to balance the acidity.  “Undistinguished,” said my husband, and I agreed.  It might be better with food.

This is their 100% stainless steel chard, so no oakiness.  We smell and taste ripe pear, though it doesn’t have tons of fruit taste.  It’s a good chard, reasonably dry, and would go well with a Long Island clam chowder.

Noticing the price, we wonder whether this would be one to buy for everyday drinking.  Nope.  Though the aroma had pleasant notes of mineral and honeysuckle, the taste is actually bitter.  It is fermented 25% in oak, and the rest in steel, but we taste none of the buttery or vanilla notes one would expect.  We dump most of the taste!

The 2011 Riesling has not yet been bottled, so they’re serving from carafes.  Made from Finger Lakes grapes, it has some of that upstate taste I find hard to describe.  It smells like white grape juice!  Taste is not overly sweet, with some mineral and gooseberry notes, though it is fairly monochromatic.  My husband had recently been to a wine tasting of German and Long Island Rieslings, and felt this one did not measure up to the others he had had. 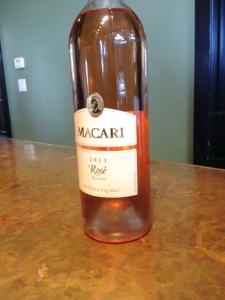 In the first indication that our seriousness has been observed, one server asks us if we like rosés, and then offers us a taste of theirs.  A blend of cabernet franc, pinot noir, and merlot, it has the usual strawberry aroma and taste, with again a fair amount of minerality.  There’s something flowery about it as well.  Though not as good as Croteaux, it is a fine rosé.

New glass for the reds.  Our server calls this a “pizza pasta burger” wine, which the price would surely indicate.  “It’s not terrible,” says my tasting companion.  Talk about damning with faint praise!  But it is a very light red, with no depth or interest or finish.  It’s just there. We were, however, intrigued by the aroma, which I characterized as a cherry-flavored cigar.

Sette. The size of the pour varied a bit.

This is their red blend, of 50/50 merlot and cabernet franc—not seven wines, as I thought based on the name.  Sette actually refers to the town Settefrati, a small town south of Rome, which is the home town of the Macari family.  Our server calls it their best seller, and I can see why.  The aroma is of dark brambly fruits, and the wine itself is light but very drinkable, perhaps with “Sunday gravy.”  By the way, it was served too cold, so we warmed the glass in our palms, which helped bring out the taste.

I’ve heard people refer to a brininess as an expression of the Long Island terroir, but I never experienced it quite as forcefully as with the aroma of this wine.  Sea air!  Fortunately it does not taste salty, but rather of dark plums, and is our favorite so far.  Some tannins, a touch of oak.

Here the name refers to the two waters of the North Fork—Peconic Bay and Long Island Sound.  This is Macari’s Bordeaux blend, a mixture of 70% merlot, 17% cabernet sauvignon, 4% cabernet franc, 8% malbec, and the rest petit verdot.  Yes, I’d like this with steak frites, please.  It is our server’s favorite.  Not particularly complex, but good and quite drinkable, with plenty of fruit and spice aromas and flavors. 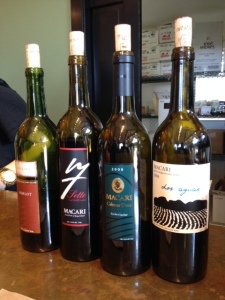 A line-up of reds.

So if you’re counting you realize that our tasting should be over, but after asking us what we thought of the Dos Aguas, our server decides we should try two more wines.  This is certainly better than most merlots, and 2007 was a good year.  We taste lots of dark fruits, and the aroma is delicious.

This one beats the bunch, as my grandmother used to say with the birth of each grandchild.  Another Bordeaux blend, or a Meritage, of 56% merlot, 26% cabernet sauvignon, 13% cabernet franc, 3% malbec, and 2% petit verdot, this one has aromas of Belgian dark chocolate and dark fruits.  OMG I say when I taste it.  Complex, with lots of tannins and yummy fruit.  We buy a bottle to put in the cellar! 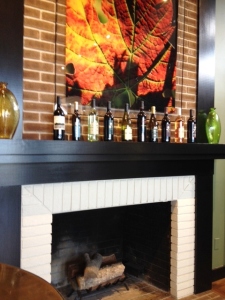 Reasons to visit:  you want an all-purpose winery with space for a large group or the intimacy of a conversation at the bar; you need to pick up a wine-related gift or buy a snack;  the 2010 Bergen Road; the 07 Merlot Reserve, the 08 Dos Aguas, the 08 Cabernet Franc;  did I mention the 2010 Bergen Road…

What a beautiful day. In Greenport, every restaurant’s outside tables were filled, and plenty of people opted for an outdoor tasting.