We were quite pleased when Greenport Harbor Brewery opened up a second location in Peconic, which is more convenient for us to refill our growlers, since we enjoy their interesting and delicious beers.  I really should blog about them several times a year, since, though certain brews are always on the menu, they vary their offerings seasonally.  For example, in the fall we enjoyed their Leaf Pile Ale, and now they offer special winter brews.  Indeed, we visit them more often than I blog about them, as our ever increasing stock of Greenport-Harbor-logoed glasses attests.   You see, the way a tasting works is you are technically paying $8 for the glass, which you then get to keep, and which is filled successively with their six menu items.

The menu offered additional brews not on the tasting list.

It was bitterly cold outside, and blowing snow made parts of the roads hazardous, but still there were quite a few people at the picnic-type tables in the large industrial-style tasting room.  Over in one corner, people from the Fork and Anchor Deli in East Marion had set up a table, where they were selling sub sandwiches, huge pretzels, and bowls of chili, while a little further into the room a band was getting ready to play.  Unfortunately, we had to leave before the music started.  While some people were doing a tasting, others were buying pints.

Food on offer from a local deli.

At the bar, large bowls of small pretzels helped clear the palate between tastes, while our server enthusiastically explained each beverage.  A home brewer himself, he and our son-in-law got into quite a technical discussion of brewing recipes and techniques.  He also told us about upcoming events, including the opening of a restaurant in the space and plans for a pig roast, which had us looking forward to June for another reason besides the end of ice and cold. 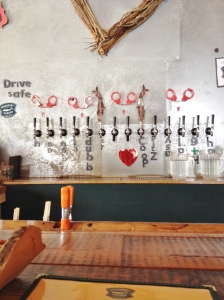 The percentage of alcohol in each beer is a usual notation on brewery menus, since beers can vary greatly in how alcoholic they are.  The Harbor Ale is their standard brew, always on the menu, an American pale ale with pleasant citrus notes and a golden color. 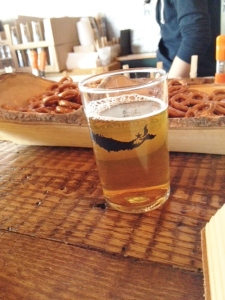 This is another standard, and one of our favorites.  If you like dark beer, this is a delicious one to try, with lots of coffee and chocolate tastes. It may be that I was influenced by the fact that it was just the day after Valentine’s Day, but I think it would pair well with dark chocolates.

The “other side” is the West Coast, as this is made with an assortment of West Coast hops, such as Cascade, which, our son-in-law noted, tend to add a “piney” note.  We agree, and also some citrus tastes and various layers of flavor.

We became fascinated by the light fixtures made from growlers with the bottoms cut off.

Here is an example of a seasonal brew, as this is made for the winter time.  It is a hearty winter treat, a bit bitterer than the porter, and very flavorful.  Before it was served, we were asked if any of us had a nut allergy, as chocolate with nuts is used in the brewing, as well as oatmeal. The taste led to a discussion of the joys of dark-chocolate-covered orange peel.

This is not a misspelling of double, but rather a Belgian beer style.  Our son-in-law lived for a while in Brussels, so we deferred to him. He declared this brew appropriately funky, but not quite funky enough.  Apparently it is brewed on cherries, and follows a style first used in monasteries in Belgium. 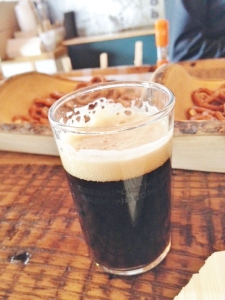 Saison refers to the yeast used in this very tasty and refreshing rye-based quaff.  This is also a Belgian style beer, and our server informed us that Greenport hoped to introduce more Belgian brews in the future, an ambition we applaud, since on a recent trip to Belgium we became quite enamored of the beers, and also of the fact that every sidewalk café seemed to offer its own brew.  (We also noticed that, although I usually ordered the dark brown beer and my husband the light brown one, the waiters in Belgium almost invariably put the dark beer down in front of my husband.  Who knew beer had gender?)

At the end of the tasting, we filled our growler with the Otherside I.P.A. to go with the pizza we planned to get from Michelangelo later that evening.  It went very well.

Reasons to visit:  you like beer; you love beer; you’re interested in exploring a variety of beer tastes; you want a collection of little glasses; all six of the beers on offer, as well as every other beer we’ve ever tried there; you’re tired of wine (just kidding).

Room for plenty of people at the new tasting room.