The entrance to the tasting shed

The Artful Dodger, Tilting at Windmills, Counting Stars, Flying and Falling—how could I, an English major, resist wines with such allusive names?  I could not, especially since I was also quite happy with what was in the bottles.  Regan Meader, the owner and winemaker of Southold Farm + Cellar, loves to experiment, and doesn’t like to compromise.  He likes to make what he wants to make, and since the results are so good, let’s hope his experiments lead to his success.

That success seemed to be in doubt this past summer when, due to some issues with permits with the town of Southold, he wasn’t able to open his tasting room.  Fortunately all is settled now, and he used the time this summer to re-decorate the tasting room, located off a back road next to his house, on his farm.  His own grapes still were not quite ready to be used, so he sourced grapes from Osprey (where he used to work), Gristina, and other places. 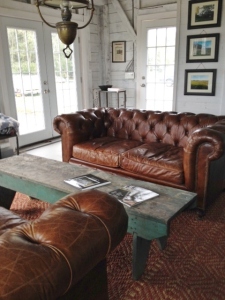 Comfy couches are a nice addition to the tasting room.

We arrived on a cold, damp day to a warm welcome from Mr. Meader, with whom we discussed not only the wines, but also the traffic we encountered last weekend (mainly due to activities at Harbes), development on the North Fork, and literature.  After a while some additional people came in with kids in tow, so the room became quite lively as they settled on the comfy couches.  One couple had arrived on bicycles despite the weather, and we and Mr. Meader discussed various options for their next stops, including Horton’s Point Lighthouse and One Woman Winery. 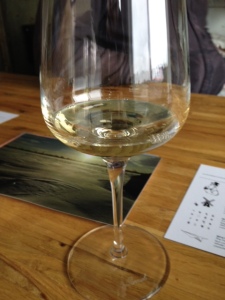 Well, of course I had to ask why name a wine after a Dickens character.  Mr. M. and I discussed the Dodger’s character, how cheeky he is, and that moment when he is being hauled off to jail and berates the policemen for not knowing what a special gent he is.  This version of sauvignon blanc is also pretty special and a bit cheeky.  Unlike most local sauvignons, this is not steel fermented.  Instead, he uses neutral oak barrels which add just a touch of vanilla to the citrusy tangerine taste and a more textured mouth feel.  Good!  Of course this would be good with raw oysters, but could also complement something like oysters Rockefeller or you could just sip it, perhaps with a slice of brie.  We buy it, thinking about the local scallops sautéed with onions, red peppers, and local corn I’m planning to make for dinner.

Chardonnay can be such a pedestrian wine, so clichéd, so perhaps it is Quixotic to take it on and try to do something different with it.  The Man of La Mancha may have failed in his attempt to vanquish the windmill (a passage which had me laughing out loud when I read it), but Mr. M. is certainly not defeated.  “I was thinking of Chablis,” he says.  We smell mineral, asparagus and taste baked pear, minerals, with something a bit herby at the end.  There is a touch of sweetness but not too much.  He ferments it on the skins, again in neutral (i.e. old) oak barrels, achieving some nice texture.  Good!  I could see having it with duck, though usually with duck I want red or rosé.

Having recently had an unfortunate encounter with a red sparkling wine at Sparkling Pointe (I dumped it!), I was a bit leery of this option, but no fear, this was lovely.  Made from 100% petit verdot, it has an aroma of dark fruits, then is tingly on the tongue.  Not sweet, it is light but not inconsequential, with a mineral aftertaste.  It would be perfect with charcuterie, or perhaps with a Thanksgiving turkey.  In the tasting notes, Mr. M. says he let petit verdot’s “freak flag fly.” His tasting notes are fun to read.  Oh, and the name?  The bubbles rising in the dark wine remind him of stars in the night sky. 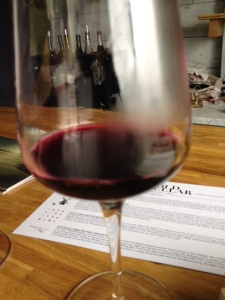 The glass is a touch foggy from my attempts to warm the wine.

What’s the difference between flying and falling?  Hmmm.  This is 100% cabernet franc and spends seven months in oak.  Lots of aroma—we smell olives and chocolate and maraschino cherry.  The wine is a bit too cold—time to set up the heater, we agree—but as it warms we like it better.  At first it seemed as though it didn’t follow through with as much interest as the aroma would suggest, then it got better.  It might also benefit from more time, or from sitting longer in the glass.  At first we were afraid he had fallen, but he’s still flying.

Nothing like a short commute! This is where he lives.

Reasons to visit:  All four of his wines are worth tasting and thinking about; nice to get away from the usual places and be somewhere where the winemaker likes to experiment; Mr. Meader, who is fun to talk to, enthusiastic about his wine, and a really nice guy; pretty rustic little tasting room.

These grapes have been picked. 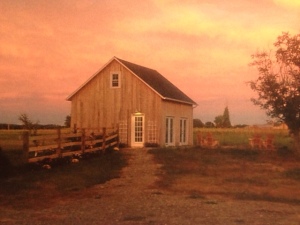 Pretty, isn’t it? I took this photo from one of his menu cards!