Even with breezes off the bay, it was too hot to sit outside at a winery, so we decided the weather demanded some nice cold beer.  Off we went to Greenport, to the original—which they now describe as the “boutique”—site of our favorite East End beer maker.  They also have a huge facility in Peconic, more a beer barn than a tasting room, which is often very crowded.  On Valentine’s Day weekend we walked in there and walked out, as it was clear there were no seats available plus a long line to even get a tasting.

Look for this sign on a back street in Greenport.

We quickly found a place at the bar in the small upstairs space, and were soon joined by a genial couple who had not been to a beer tasting before.  We had opted to share one tasting flight, and after seeing how generous the pour was, they decided to follow our example.  You get six “tastes” (actually a good-sized glass) for $8.00.  By the way, they no longer give you the glass to keep.  The menu is somewhat confusing, as our new friends found, as they were not sure whether you get each taste for $8 or all six, or which of the many varieties listed are included.  The starred ones, we explained, were in the tasting, and they are served in order from lightest to darkest, or most intense in flavor.  We may have to stop in another time to try some of the other options.  A line on the chalkboard separated the beers that are always available from the seasonal and/or experimental ones.

We were also on a mission of sorts, as we had brought an empty growler—the refillable jug the brewery uses—to fill with beer for our dinner of barbecued ribs and Harbes sweet corn.

Of course, since this is the first taste, it is the lightest.  The color is a light gold, the taste is clean and tangy and light, not at all hoppy.  It would be the perfect beer to consume after an afternoon of gardening in the warm sun, as it would go down very easily and was quite refreshing.  It was also our new friend’s favorite, though not ours.  We decided she and I had opposite tastes!

Summer Ale next to our growler.

After a quick rinse with water from a pitcher, the server filled our glass with this perennial classic of Greenport Harbor.  It is a reliably good beer, with a touch of bitter hops, and could certainly go with our ribs, though we were not decided yet. 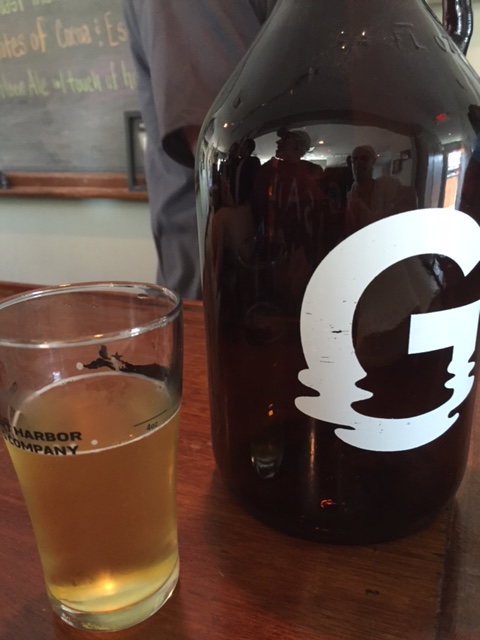 The menu describes this as a “Berliner Weiss,” or in other words a wheat beer. In general, I tend not to like wheat beers, and this is no exception.  “Tastes like flavored water,” opines my husband.  “The Germans can keep it!”  I reply.  The aroma and taste are both rather yeasty, with some funkiness, and it’s quite fizzy.  It might go well in a shandy. We didn’t finish our portion. 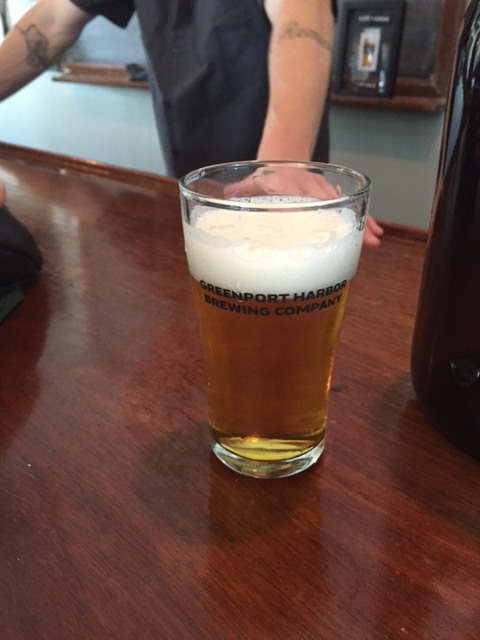 I seem to recall from a former visit that “otherside” refers to California hops, but our server today seems very uninterested in giving us any details unless we ask more than once for information.  He’s much more forthcoming to a young fedora-hatted couple down the bar from us.  This is our favorite so far, quite hoppy, with a fuller mouth feel and more flavor than the Harbor Ale.  I think we’ve found our rib accompaniment. 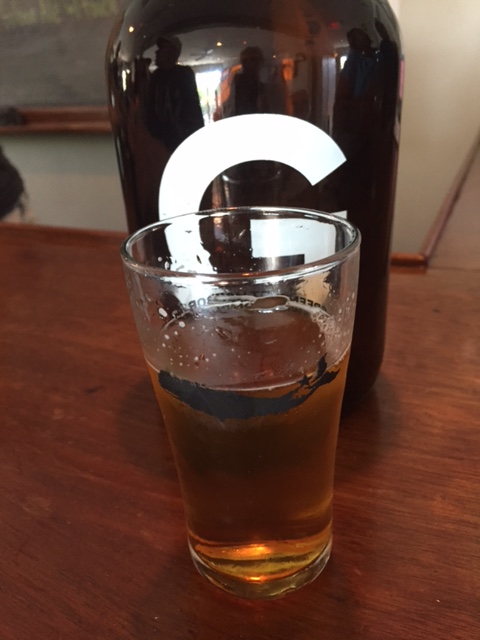 This is generally my favorite of their beers, I explain to the friendly couple next to us, and he agrees that he likes it.  It’s a porter that would not be out of place in an English pub, with an aroma of coffee and tastes of coffee and chocolate, with just the right balance of sweet and bitter.  If you like dark beer, this is the one for you—but it would not complement our ribs.  Maybe it would go well with shepherd’s pie, or a plowman’s lunch of cheese and bread and pickles.  We’re getting hungry, and we notice that they also no longer put out bowls of pretzels. Oh well. 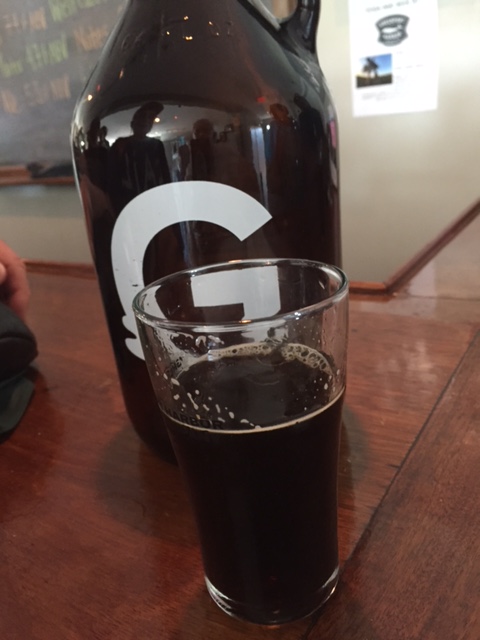 “American Stout,” says the menu, and the name is explained when the server tells another couple that they actually brew this with coffee beans sourced from the North Fork Roasting Company, a coffee place in Southold that roasts their own beans and has quickly become a popular spot.  This dark brew smells and tastes like a strong espresso.  You could have it with breakfast and think you were getting your caffeine fix for the day!  We both find it a touch too bitter.  I wonder how it would taste topped with whipped cream.

Fork and Beans, as in North Fork and Roasting Company espresso beans!

Reasons to visit:  the Otherside IPA, the Black Duck Porter, the Harbor Ale; a seasonally changing roster of beers; a hefty and low-priced serving of beer, given the six generous tastes for $8; the chance to fill your growler with nice fresh beer (we did take the Otherside IPA).  For more of a party atmosphere, with music and food often available, you can check out their location in Peconic.