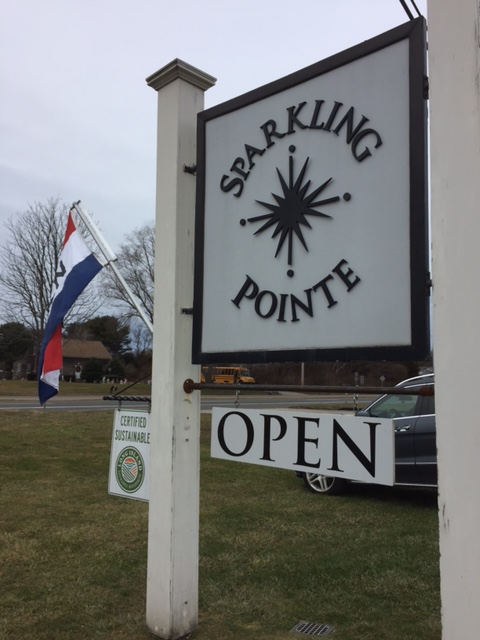 After we came home from running errands, my husband discovered that he couldn’t find his house keys (which also meant a variety of other important keys).  We retraced our steps, becoming gloomier and gloomier.  Then…he found them!  Feeling in a celebratory mood, we decided to head to the only-sparkling-wines vineyard, Sparkling Pointe.  (Well, we don’t need much encouragment to opt for a sparkling wine.)

Everyone there seemed to be in a celebratory mood. 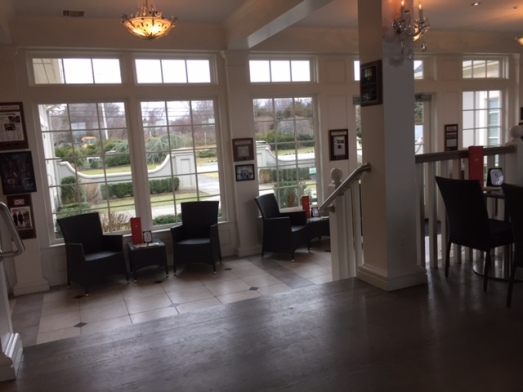 Plenty of room for more people.

The airy, modern room was filled with groups at tables, enjoying bottles of wine and various snacks they had bought at the winery (outside snacks are not allowed, but they have a nice list of cheeses and charcuterie).  The place was a bit noisy, but not unpleasantly so, and the staff behind the bar was friendly and accommodating, especially when they took note of me taking notes.  The tasting menu offers four tastes for $20.  We noticed that the menu included Cuvee Carnaval, a rosé sparkling wine which we ended up dumping last time, as it was much too sweet for us.  So I asked if it was possible to substitute the Blanc de Blanc for the Carnaval.  At first she said no, but then reconsidered and said yes.  Whew. 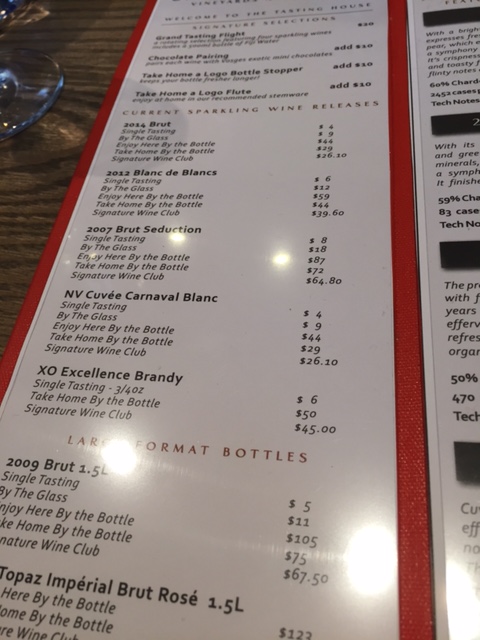 With our tasting, she included a bottle of Fiji water, which was useful for cleansing our palates between tastes.  A note about the term “sparkling wines”:  the only wines which can legally be called “champagne” are those grown in the Champagne region of France.  However, these wines are made using the same method—méthode champenoise—as in France, and are made to taste similar to French champagnes. 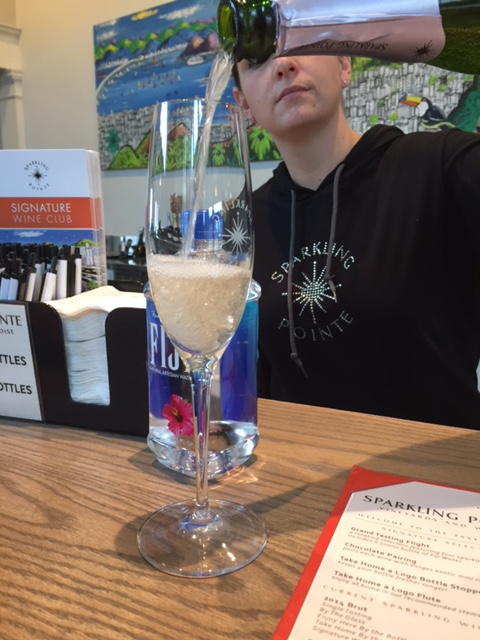 A blend of 60% chardonnay and 40% pinot noir, this is a pleasant, crisp drink.  The aroma is of lemon peel and stone or mineral, and the taste of the tiny bubbles as they burst on the tongue is of pear and citrus.  Very nice.

This one is aged in the bottle—and it’s a big bottle!—for quite a while, spending four years “sur lies” (which means the wine is aged on the lees, the bits of grapes that form a sediment), giving it a more complex and interesting taste.  It is a blend of 59% chardonnay, 31% pinot noir, 5% pinot meunier, and 5% reserve.  The aroma is warmly yeasty, with a whiff of something chemical.  The first sip seems somewhat chemical to us, too, but as it sits in the glass that dissipates and we find it quite good.  This is a sparkler you could compare to French champagnes and it wouldn’t do badly.  By the way, we get a new glass with each taste, a nice idea.

You get a nice sized pour here.

Okay, so the Blanc de Blanc is not on the tasting menu, but we’re getting it instead of the Carnaval.  Good thing too, as it is our favorite of the day.  Made of 100% chardonnay grapes, it was also ages on the lees.  It has an aroma of honey, maybe thyme honey, and crisp small bubbles.  My tasting buddy says it “blooms in the mouth.”  I say it would make a good sipping sparkler, with tastes of citrus and just a touch of sweetness.

This really reminds me of a French champagne, with an aroma of baking bread and almonds.  The taste also has hints of almonds, as well a red grapefruit. The bubbles are tiny.  Our server informs us that this spends eight years on the lees, and is a 50/50 blend of chardonnay and pinot noir.  Really lovely.  Too bad it is so expensive, but the method of making these wines is labor intensive and requires lots of years of investment, so the cost is understandable. 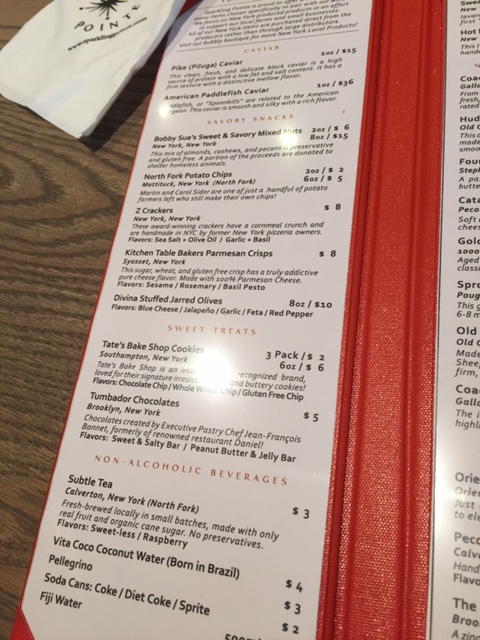 They don’t allow outside food, but do have a nice menu–including chocolates.

Reasons to visit:  you feel celebratory (whether because you found your keys or for some other reason); you like sparkling wines; you feel like doing some shopping in the well-stocked boutique; in the summer you can sit outside and sip champagne…I mean sparkling wine.

Brazilian carnival masks on display in the boutique–the owners have a connection to Brazil (hence the wine named Carnaval). 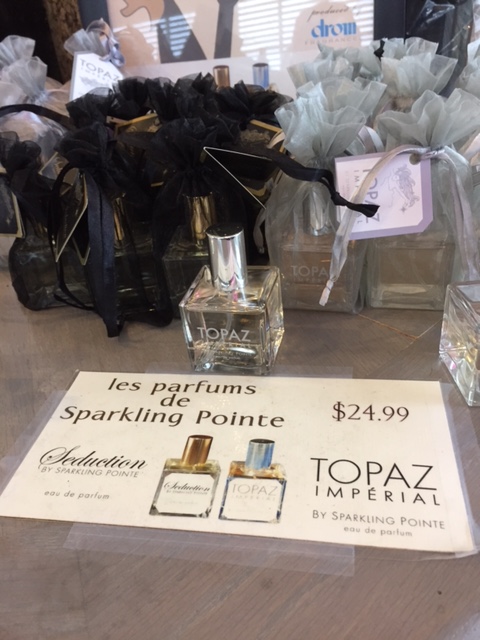 This is the first winery I’ve ever seen with its own perfume! 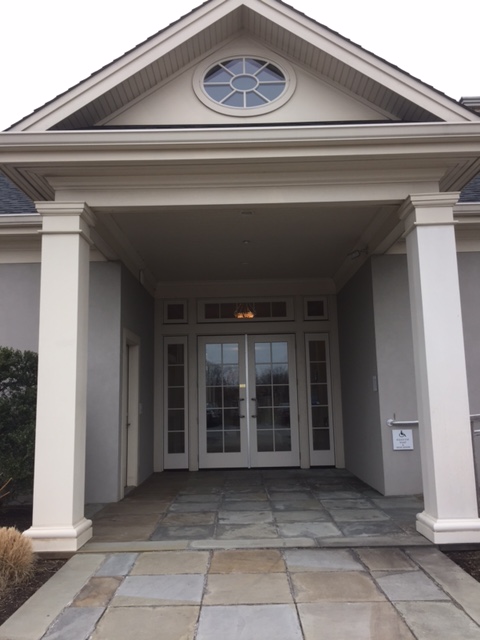