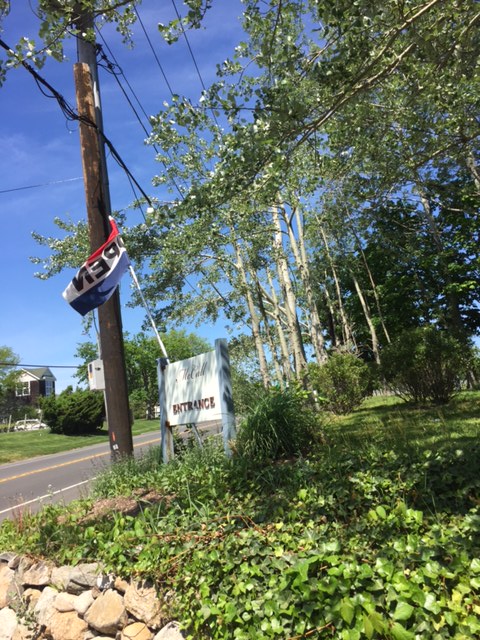 Although they are right off Main Road, when you pull around to the back you feel as though you are in the country.

Although they are right off the Main Road, there is a rustic feeling to the McCall Wines tasting room and property, a sense of peace and quiet—at least when it is not crowded.  Part of this is due to the tasting room itself, located in a former horse barn, with the stables repurposed as tasting alcoves, and the other part is the lawn outside, dotted with picnic tables and adjacent to the vines.

Inside tasting area, in a repurposed horse stall.

On this sunny afternoon, we shared the place with several other couples and small groups.  We could have stood at the bar or sat inside at a table, but we decided that the sun had been making a rare enough appearance that we needed to sit outside and enjoy the pretty day.  Mrs. McCall brought us our tastes, except when we decided to pop in and get them ourselves.  She served them two at a time, in a two-ounce pour that felt quite generous. 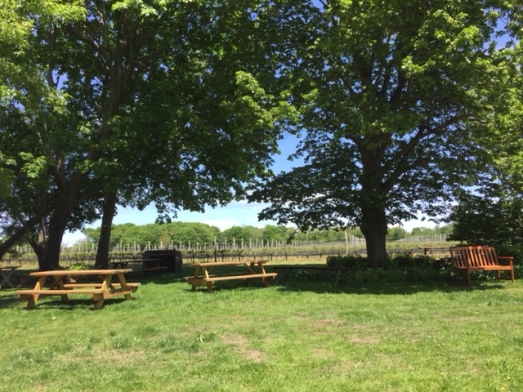 Part of the outside area, with a view of the vines.

The menu offers four choices:  Blancs, four whites for $12; Corchaug, four reds for $16; Premium, a mixture of two whites and two reds for $14; and Estate, four of their higher priced wines for $20.  They also offer a small menu of cheese and crackers, and request no outside food on Fridays-Sundays.  We decided to do a shared tasting of the whites and then the Corchaug reds (named for the Native American name for Cutchogue).  We had high hopes for the reds, since McCall had started out only making red wines, but we were also pleasantly surprised by how much we liked the whites.

Yesterday we attended a Case Club event at Croteaux Vineyards, our standard for North Fork rosés, so we had a recent comparison in mind when we tasted this mostly merlot pink wine.  It was quite different from the two Croteaux wines we had sampled, but fine in its own way.  The aroma had almost as much minerality as strawberry smell, and the taste also balanced minerals and sweetness, though a bit sweeter than we like.  My husband said it reminded him of pancakes with strawberry syrup.  Well, maybe not that sweet.  This is a rosé one could enjoy sipping well-chilled, though I prefer the leaner style of Croteaux.  (The wine is named for Mr. McCall’s mother.) 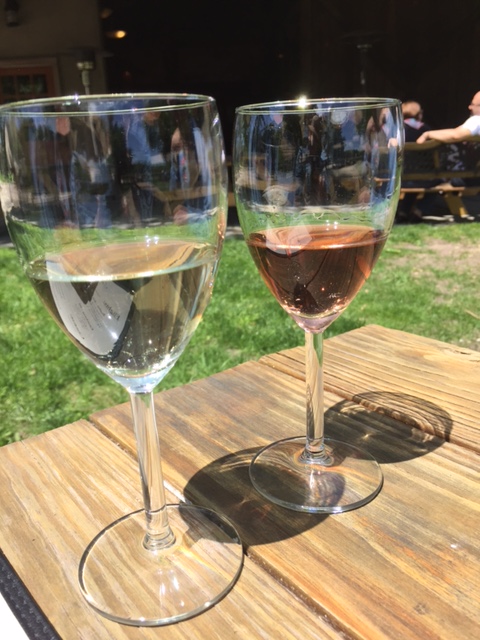 Mrs. McCall informed us that this was made in the French style, like a Sancerre wine (think sauvignon blanc=Sancerre and chardonnay=Chablis).  Good choice.  Although it did not have much aroma, it had some lovely tastes of citrus and kiwi and maybe gooseberry as well, plus some minerality and even a bit of salt.  Refreshing, was my tasting buddy’s summation.  We liked it.

This is a pretty typical North Fork steel-fermented chardonnay, with citrus tastes and just a touch of sweetness.  The aroma reminded me of wet rocks, with almost a chemical note.  It’s a fairly tasty steel chardonnay, and might overpower a delicate fish.  However, it would have gone well with the fillets I made the other day which were topped with an anchovy and onion sauce (thank you, Marcella Hazan and Braun’s fish store).

Not surprisingly, the oaked chardonnay smelled like Werther’s butterscotch candy, and tasted rather butterscotch-y as well.  Not my favorite, but I could appreciate that it has layers of flavor.

When I told my husband this was a light red that would pair well with roast chicken, he told me I needed to think of another food pairing.  Okay, I said, pork chops.  This reminded me of a Beaujolais, a picnic wine, though it has a bit of a tannic tingle that makes it a touch more interesting. 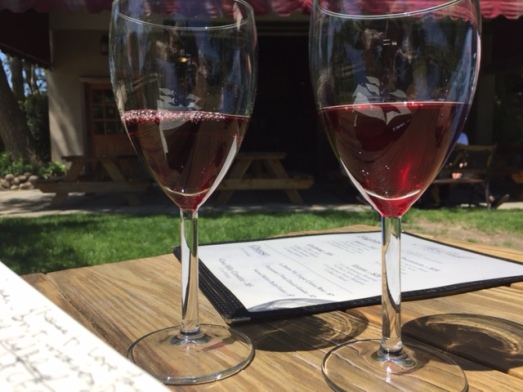 When Mrs. McCall brought us our first red tastes, along with fresh glasses, she explained that this one is called “Hillside” because…the grapes are grown on a hillside.  Really.  But that’s not as simplistic as it sounds.  Because of the hilly location, this part of the vineyard has better drainage, which concentrates the flavors of the grapes.  Although it is similar to the other Pinot, the aroma is stronger and the taste features more dark fruit and is somewhat mellower, with a longer finish.  My husband noted that he wasn’t wearing socks, but if he were, they would not have been knocked off by this wine.  Good, but not exciting. 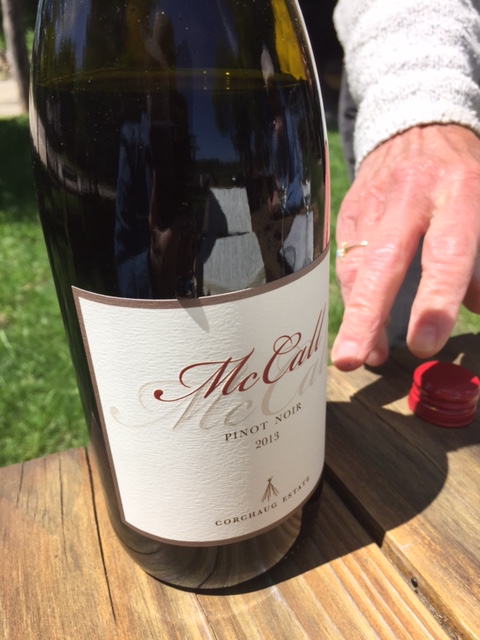 Does anyone still know what Cheracol is?  It was a cherry-flavored cough syrup I became quite familiar with in my pre-tonsillectomy youth. Fortunately, though this merlot smells like Cheracol, it doesn’t taste like it!  The wine is dry, with lots of tannins, and not a ton of fruit, with a long finish.  We’re thinking it could even use more time to age, and, as my tasting buddy opined, it “shows promise.”  If we had room in the cellar (well, we just bought a case of Croteaux rosé), we might have bought a bottle to keep for a few years.

2010 has a reputation as a great year on the North Fork, especially for reds, and Mrs. McCall was quite enthusiastic about this wine—deservedly so.  I think the technical term is “yummy.”  The tannins are relatively soft, so my guess is one should drink it now.  The aroma is of cherry tempered by wood, and the taste has lots of complex fruits, while still being dry.  If we had stayed on and ordered some cheese to go with a full glass of wine, this would have been my choice (Instead we went home and sat on our porch with wine—a lovely Meritage from Coffee Pot Cellars–and cheese from Love Lane Cheese shop!). 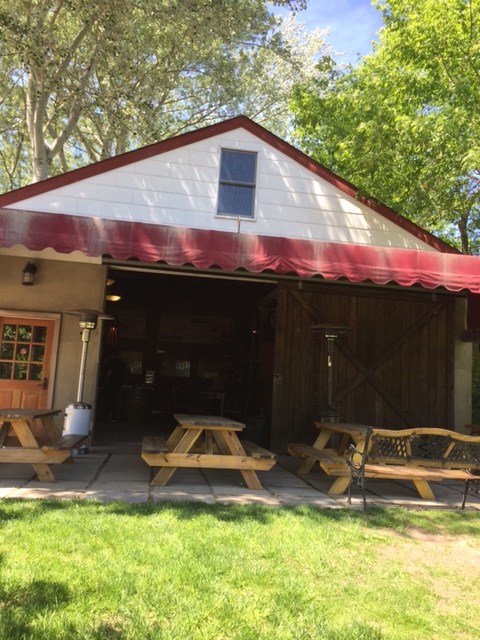 Reasons to visit:  lovely bucolic setting; calm place that limits groups; unusual tasting room; the 2015 Sauvignon Blanc, the 2010 Merlot Reserve; nice picnic tables for during the week if you want to bring some snacks. 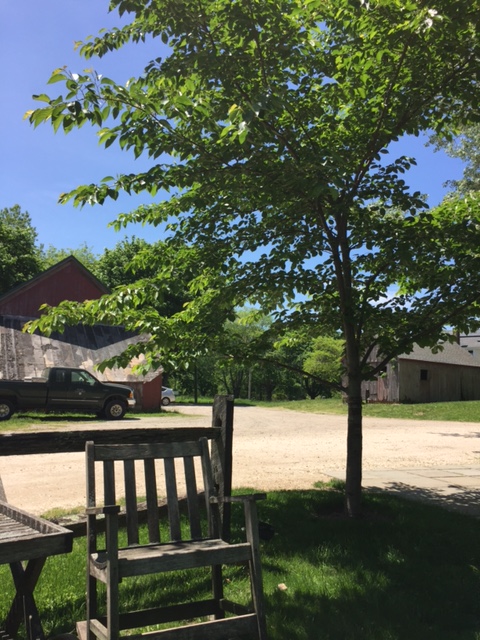 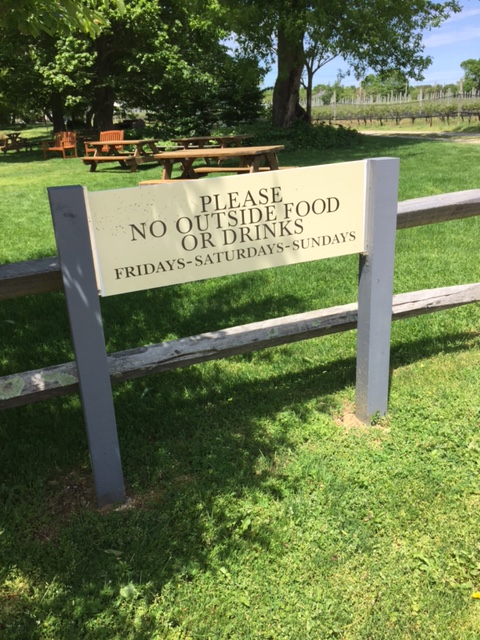