The Wölffer Estate building is quite attractive.

We had an errand to run on the South Fork, one which couldn’t be put off until the winter, so we decided that as long as we would have to brave the traffic on Route 27—and there was a lot of it—we would make a day of it.  So we visited the Parrish Art Museum (great installation of gigantic photos and videos of waves) and then headed to the Wölffer Estate tasting room in Sagaponack.  We arrived there around lunch time, and a very pleasant hostess showed us to a table on the pretty back porch overlooking the vineyard. 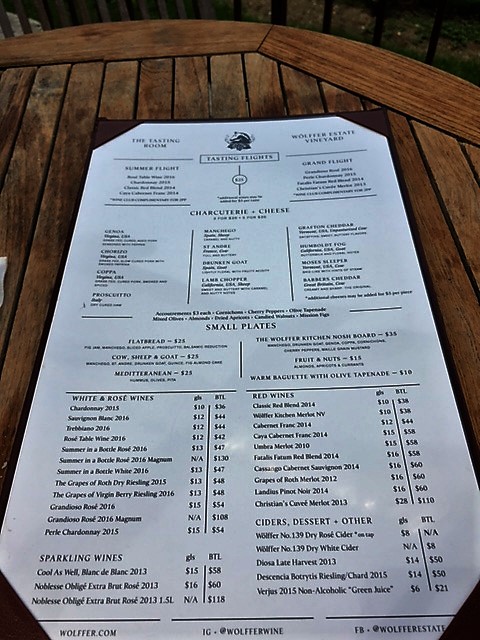 We perused the menu, and were immediately struck by the prices.  Well, we were in the Hamptons.  They offer two tastings, each featuring four wines for $25, the Summer Flight and the Grand Flight.  Figuring it would be a long time before we came back, we decided to get one of each, sharing tastes along the way—a decision facilitated by the fact that the wines in the two flights are well matched.  Each one has a rosé, a chardonnay, and two reds.  I was disappointed to see that All Summer in a Bottle, their popular rosé, was not in either tasting, though it was available by the glass.  Wines by the glass range in price from $10 to $28, and bottle prices go all the way up to $110.  Whew.

We thoroughly enjoyed this cheese tray.

Since it was lunch time, we also ordered a cheese board from their well-curated menu of snacks.  We got very generous servings of our selections—Humboldt Fog, St. André, and Lamb Chopper—plus crackers (and more crackers when we used up our allotment) and a blob of guava paste for $25.  Our flights arrived at the table in a series of carafes, lined up on nice slate trays, clearly labeled as to each wine, which we then poured at our leisure into our big wine glasses.  And I do mean at our leisure, as we took our time, sipping and munching, for over an hour.  It was a beautiful day, and we felt as though we were on vacation—a feeling facilitated by the view over the vines, the excellent cheeses, and the group at a nearby table conversing in French!

We also liked the back patio.

If you check out their web site, you will learn that the property also includes a horse farm—and the named wines are all named for horses from Wölffer’s barns—and this note in all caps:  No Bachelorette Parties.  When it was time to head home, we decided that it was worth it to take the ferries back to the North Fork rather than sit in the bumper-to-bumper traffic on 27.  Good decision.  The “Grand” tastes are marked with an *.

Our waitress gave a quick run-down of all the wines when she brought over our flights, so my notes are somewhat sketchy.  She also spoke really quickly!  However, I did glean that this rosé is a blend of merlot and I believe she said chardonnay.  In any event, it is a very light dry rosé, so light that with your eyes closed you might think it was a sauvignon blanc, despite the faint strawberry aroma.

This rosé spends a little time in oak, which you can slightly sense, and which gives this one a bit more complexity than the other.  Again, it is very dry, with some nice fruit, and was good with the cheeses.  But for my money, I’d rather have any Croteaux rosé.

The chardonnay is a pretty color.

A chardonnay for those who think they don’t like chardonnays, according to the waitress, this is mostly steel fermented and is very light and dry, with citrus tastes and a smell of lemon grass.  You could have it with seafood in a cream sauce.

At this point in the tasting, we began to discuss the prices of the Wölffer wines and the fact that they have some of the few Long Island wines that are often rated in wine magazines.  Perhaps, I theorized, if you charge a lot for something, people tend to think it must be superior.  Our waitress had described this chard as her favorite, and I can see why.  Though it is oaked, it is not too oaky or buttery, with a very distinctive aroma.  We discuss the smell, and conclude that there’s a metallic edge to it.  The taste reminds me of baked pear.  It does not complement the cheeses.

My husband insists that it smells like “wet paper,” as well as cherries, and I don’t disagree.  He also opines that this blend of merlot, cabernet franc, and cabernet sauvignon has “all the requisite elements” of a red blend.  It is on the dry side, with not much by way of tannins, and some nice fruit tastes.  The waitress had mentioned that it was aged in both steel and oak, and that it might even be nice lightly chilled.

Now you know why there are horses on the labels.

A fairly classic Bordeaux-style blend of merlot, cabernet franc, cabernet sauvignon, and petit verdot, this is my favorite of the day.  Dry, with good tannins, it has lots of cherry and other dark fruit/berry tastes, though an almost non-existent finish.  It evanesces!  My tasting buddy notes that it is not as complex as a French Bordeaux can be, but it would stand up to a steak.

You can see that the pour is rather generous.

There’s something I can’t quite identify about the aroma of this one, but also prune plums and tobacco scents.  There’s a bit of a tingle on the tongue when you start to drink it.  It’s dry, with nice tannins, and lots of dark fruit taste.  I think it would go well with grilled lamb chops.

Yes, you read that price right.  This Long Island merlot, named for the founder of the Wölffer estate, is over $100 a bottle.  It comes from the oldest vines on the estate, and, according to our waitress, Christian said it is a wine one should savor with one’s eyes closed, the better to focus on the taste.  The fruit fly that flew into my glass seemed to like it…until it drowned and I fished it out.  Not sure how they justify the price on what seemed to us a pretty typical Long Island merlot, with lots of cherry taste, which “doesn’t dance in my mouth,” according to my husband.

According to their web page, they use these juniper berries on the property to make their gin.

Reasons to visit:  you’re on the South Fork and you want to visit a winery and sit outside and relax (but if you just want a tasting, I’d recommend Channing Daughters); the Fatalis Fatum Red Blend; the cheese tray.

We didn’t get to try any, but they also make ciders.

I think I wanted to try this just because the bottle is so pretty. But it wasn’t in the tasting.

The inside room also seems nice. 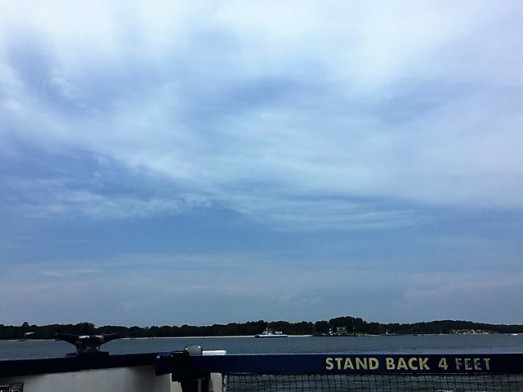 On the ferry heading home–how to get around the traffic on Route 27!