The vines are bare now.

It’s pretty quiet on the North Fork now. There’s a skim of ice on the shallow parts of the Mattituck Inlet and almost all of the farm stands have closed. A few wineries are closed for the season, while others are only open on weekends. Macari’s tasting room on the Main Road is closed, but its other location, on the corner of Bergen Road and Sound Avenue, is open every day, so that’s where we went on this chilly day.

The large tasting room was decorated for Christmas with lights and pine branches, and if we had wanted to buy gifts of local or other gourmet jams, pickles, etc., we could have found plenty of choices on the shelves near the entrance, where they also have cheeses, charcuterie, and crackers for sale. (No outside food allowed.) There was only one other couple at the bar, and one table of people in the adjoining room, so we had plenty of time to chat with the enthusiastic and well-informed server.

No outside food allowed, but they have plenty for sale.

The menu offers three different flights of five tastes each: the Estate Flight for $20, the Cuvée Flight for $25, or the Vintage Flight for $30. There’s also a dessert wine flight, or, the server offered, she could custom build a flight if, for example, you only liked reds. As you might expect, as the flights increased in price, so did the wines in each one. We decided to share the Cuvée Flight, and the pour was generous enough that we felt that was plenty (plus we got a couple of extra tastes, courtesy of my notebook!). 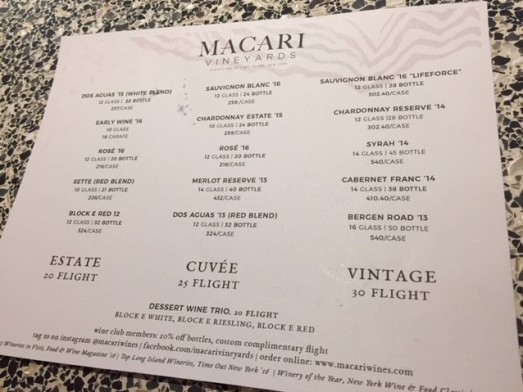 After the tasting we bought one bottle of red wine and a jar of our favorite local pickles, Backyard Brine’s “Dill Death do us Part.” 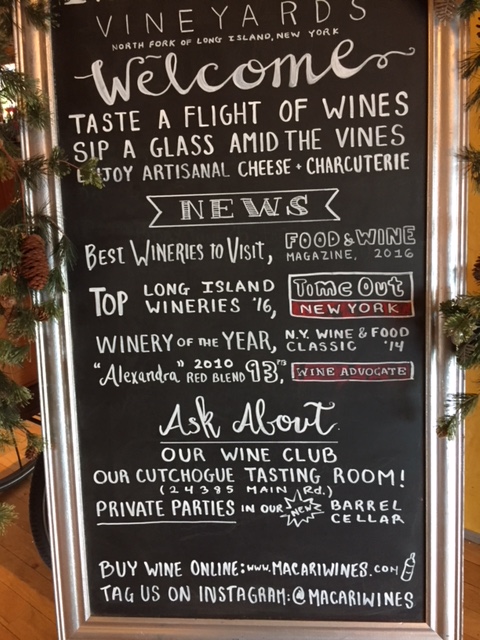 1. 2016 Sauvignon Blanc $24
As our server poured this first taste, she enthused about what a great summer wine it is. No argument there. It is a steel-fermented, crisp, lemony white, with an aroma of mineral and gooseberry. It would go well with a big plate of chilled oysters.

2. 2016 “Lifeforce” Sauvignon Blanc $28
But now, she added, at this time of year, she prefers this version of the grape, and poured us an “extra” taste. Instead of being fermented in steel or wood, they use a concrete “egg” as a vat, and the result is quite a different wine. Though still somewhat citrusy, it is not nearly as lemony, and has some tropical fruit flavors, like pineapple. The aroma is almost woodsy or yeasty. There is definitely more going on in the taste of this one, and it could be sipped on its own. It is called Lifeforce because the egg shape causes the wine to stir itself. She showed us a whole explanation of the effects of using concrete, some of which is on this page of their web site: http://macariwines.com/wine/2016-sauvignon-blanc-lifeforce/

An explanation of the concrete “egg.”

3. 2015 Chardonnay Estate $24
This is a fairly typical North Fork steel-fermented chardonnay, with a touch of sweetness, some citrus, and a bit of roasted pear taste. Nice finish. It would be good with charcuterie.

An array of whites.

4. 2016 Rosé $20
Made from cabernet franc and merlot grapes, this is a very light, dry, almost white, rosé. The aroma does not have the expected strawberry scent, but is almost chemical, like a band-aid. However, it tastes fine, less fruity than some of Croteaux’s rosés, with plenty of citrus. I could see having it with lobster bisque or some other creamy, buttery seafood dish. 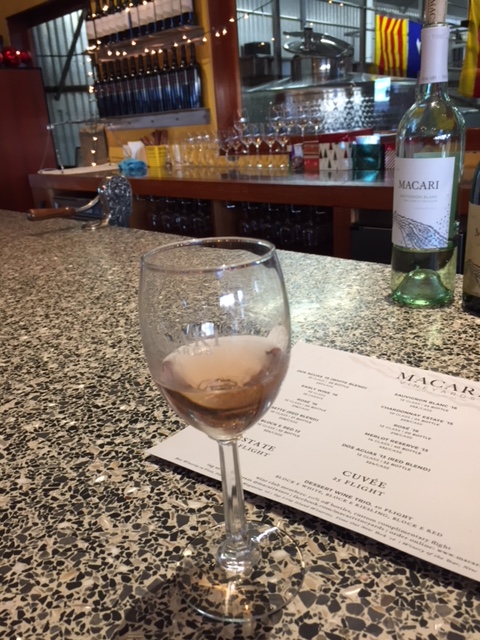 The rose is a very light pink.

5. 2013 Merlot Reserve $40
Now we move on to the reds, and she rinses our glass with a bit of red wine. We decide this is better than the average North Fork merlot. Aged sixteen months in new French oak, it has a delicious aroma of dark fruits and complex tastes of black cherry and cherry pie, dry, with good tannins. It could probably age well. 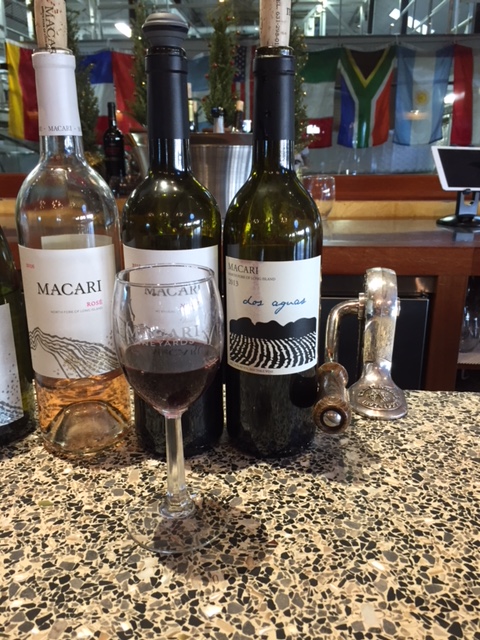 Our favorite of the reds, the Dos Aguas.

6. 2013 Dos Aguas $32
The name of this one is a nod to the two waters of the North Fork—the Long Island Sound and Peconic Bay. A blend of 50% Merlot, 28% Cabernet Sauvignon, 14% Cabernet Franc, and 8% Malbec, it is only made in good years, which 2013 clearly was. We really like it! We smell cherry, tobacco, and other dark fruits, and taste them as well. Lots of tannins. Dry, it would go well with steak or lamb chops, and we decide to buy a bottle and keep (or try to keep!) it for a couple of years.

If you are serious and thoughtful about your tasting, sometimes you get extras!

7. 2014 Syrah $45
We are so enthusiastic about the Dos Aguas that our server wonders if we would like to try their syrah. Sure, I reply, I often really like syrahs. I like this one, too, with its spicy aromas of cinnamon and nutmeg and soft tannins. I see that I have written good twice in my notes. 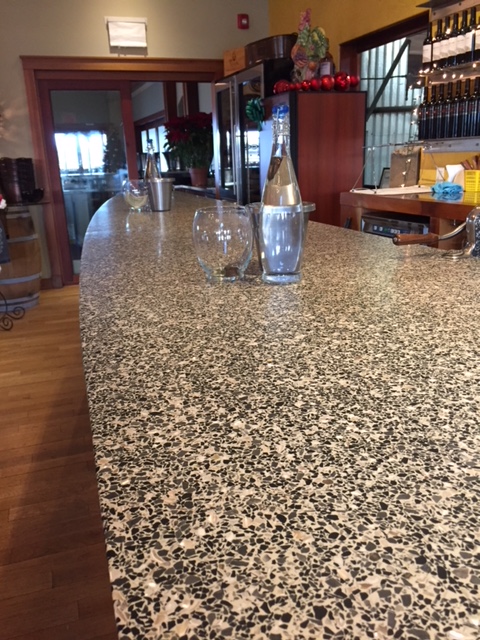 Plenty of room at the bar in the winter, but it is often crowded in the summer.

There are many tables in the next room, plus more outside.

Reasons to visit: A good all-around winery, with a long bar and ample tables; a good selection of cheeses, etc., so you can put together a snack, plus some local gourmet items; the Lifeforce Sauvignon Blanc, the Merlot Reserve, the Dos Aguas—actually, we liked all the wines, but those were especially interesting; two locations, so in the summer, if one is overcrowded you can try the other. 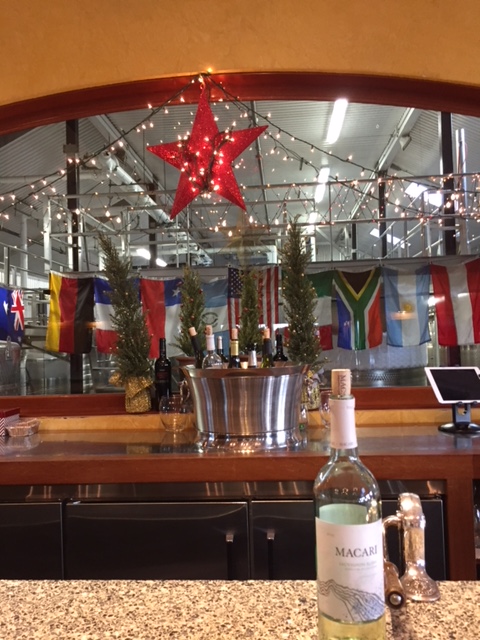 When you stand at the bar, you can look into the wine cellar.