Why the reference to beef?  Because in addition to running a winery, the McCalls also raise Charolais cattle, and sell their grass-fed meat at the winery when it is available.

If you look on their website, you will see that they care about the environment and have taken steps to protect and improve it.  They also are careful with their grapes, and, while not certified organic, they do try to minimize the use of chemicals.  They focus mostly on red wines, though they do now have some whites.

A tasting in a former horse stall!

We went there on a breezy Saturday afternoon, and had a debate about whether to sit inside or outside.  Though we ended up inside, quite a few people were sitting under the trees on the lawn.  We did note that as they were served with cheese trays several crackers were gone with the wind. 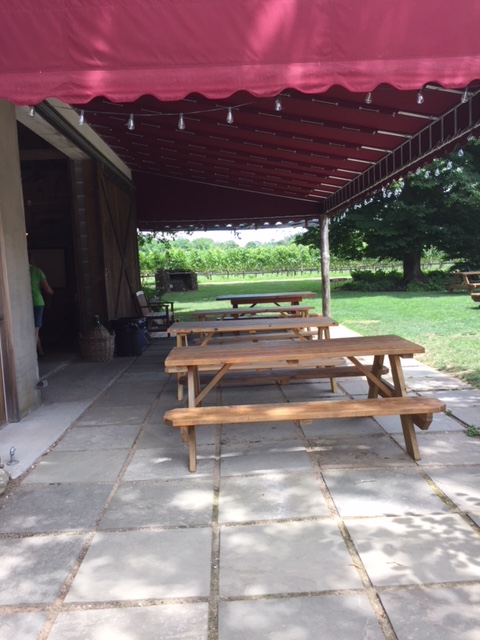 “Inside” is a converted stable, where you can actually sit in a cozy former horse stall or at a table in the central area.  We noticed all sorts of horse-related objects—saddles, bits, etc.—hanging on the walls, and a large mural showing the original Native American occupants of the land.

Next time I go I will ask about that mural.

The menu offers three options:  Blancs, three whites and a rosé for $12; Noble, two whites and two reds for $15; and Reserve, four of their better reds for $19.   Knowing they pride themselves on their reds, we decided to share a tasting of the Reserve wines.  They do a two ounce pour, so sharing one tasting was plenty for us.  Mrs. McCall happened to wait on me, and she was happy to give details on each wine as we took them two by two to our table.  In the past we have also chatted with Mr. McCall, and they are both very pleasant and interesting to talk to. 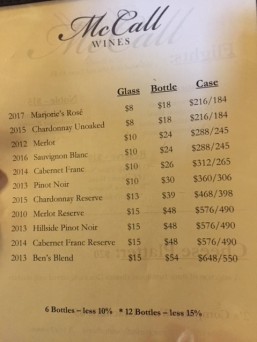 Mrs. McCall informed me that they leave these grapes on the vines longer than for their other pinot noir, making for a richer wine.  These particular vines are located on a sloping piece of their property, hence the name.  The East End of Long Island is quite flat, but there are some small hills, including one as you approach Greenport that may not be steep but is long, as I recall every time I ascend it on my bicycle.  Back to the wine.  The aroma is fruity, with some cherry and other dark fruit.  The wine is dry, with some tannins, and pleasant fruit tastes, but is overall rather light, especially in this price range.  I think it would be better with food, and my husband opines that is it “closed,” which he defines unhelpfully as “not opened up.”  Maybe it needs more aging.

Our first two tastes, plus a view of the lawn.

The vines for this wine are thirty-five years old, and the older the vines the better the wines.  This is certainly a cut above the usual Long Island reds.  I think you could even pass this off as a French wine.  It has some layers of flavor and nice fruit, plus enough tannins that you could probably age it.  On the other hand, it has very little aroma.

The bottles for the Reserve tasting

Like most Long Island merlots, this has distinct cherry flavors and aromas.  I also think I get a faint whiff of pine, or forest.  This is another pleasant wine that doesn’t seem worth the price, though we like it.  Not much tannin. 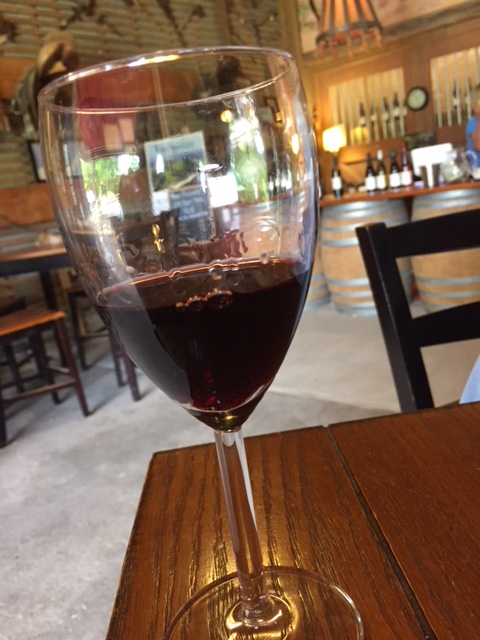 Ben was their original winemaker, who sadly died rather young, so they commemorate him in the name of their Bordeaux blend.  It is 50% merlot, 25% cabernet franc, plus smaller amounts of cabernet sauvignon and petit verdot.  The wine has a beautiful dark color, but is not as rich as one might expect.  The aroma is fruity, with also some funkiness like a forest floor.  The taste is good, not great, but again, maybe it could still age some more.  It feels like it doesn’t quite come together.  My husband thinks it would have gone well with our dinner last night of spaghetti with Italian sausage–or maybe with a steak from the McCalls’ herd. 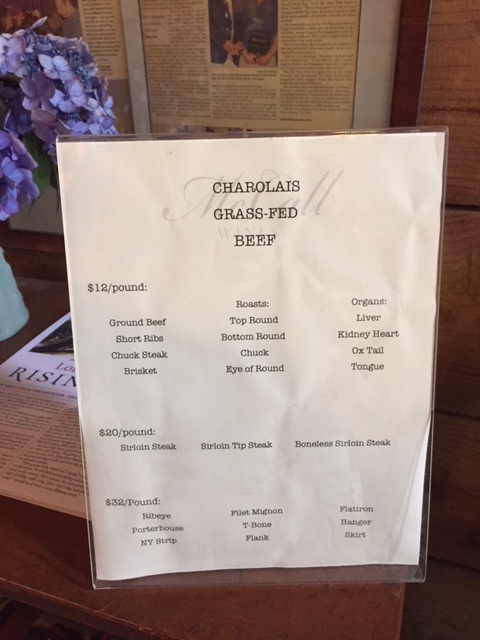 Reasons to visit:  uncrowded setting (limos only by appointment) with a pleasant outdoor area and interesting indoor setting;  the reds, especially the cabernet franc; you can also buy grass-fed beef to take home; no outside food on the weekends, but they do offer a generous cheese tray for $20 (and if a few crackers blow away they bring you extras).  I didn’t ask about dogs, but we saw one couple bringing theirs to the outside area.

Watch carefully for the entrance, since you don’t really see the building from the road. And even though they are just off the main road, their setting feels very rural. 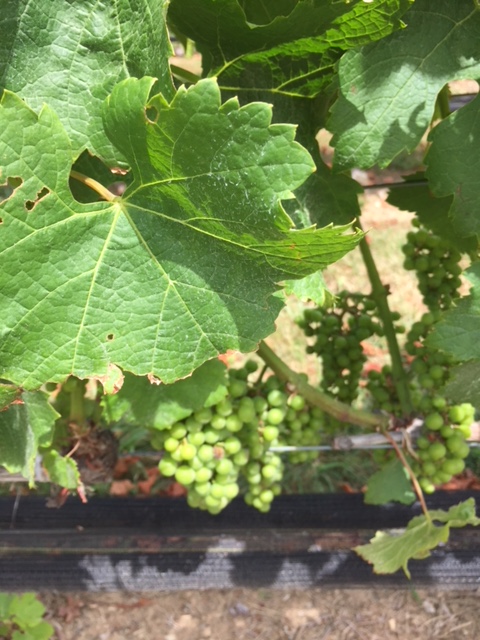