This is the building with the tasting room, not to be confused with the first building you come to, which is the wine-making facility.

The big news locally for those who are interested in wineries was that Paumanok Vineyards bought Palmer Vineyards.  My review will apply to the wines for the moment, but I wouldn’t be surprised if the future brought some changes.  According to one article I read, Paumanok’s winemaker will take over at Palmer.  It will be interesting to return in a couple of years to see how they’re doing.

Meanwhile, this was our first visit to Palmer since 2016, since a couple of times we stopped by and found the place too noisy and crowded for our comfort.  So we decided to try a Friday afternoon, and found we had the place to ourselves, aside from a few people out on the covered porch area. The last time we came we sat out there, since we were with relatives who had brought their dog with them, and we also shared a cheese platter.  We didn’t get one this time, but do note that they do not allow outside food. 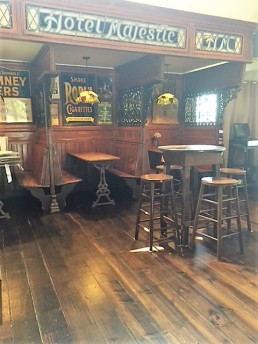 After discussing the menu with the manager and each other, we decided to share two tastings, one of the whites and one of the reds, and settled into a booth.  We enjoy the décor at Palmer, which reminds us of our favorite British pubs, with cozy booths and old signs.  We only wish we liked the wines better.  They are all drinkable, but only one was a standout as far as I’m concerned.  The menu offers three options, all for four wines for $16 to $18.  My husband characterized the pour as “micro”:  each taste was just that, about two sips per person. 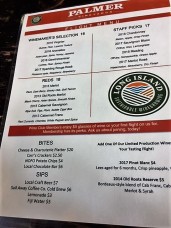 Only a few North Fork wineries offer viognier, which is too bad, as I tend to like wines made from this grape.  This one is dry, with an aroma of baked pear, and some nice fruit tastes plus minerality.  The menu says it tastes like quince.  Maybe.

Often when a wine has a name other than the varietal it is a blend, and that is true of this one, which the manager tells me is, he thinks, 60% muscat and 40% malvasia.  Steel fermented.  When I hear muscat I wonder whether it will be sweet, but this one is not.  It’s fairly interesting, not your average Long Island white, with, according to my tasting pal, “lots of body for a white.”  There’s a taste of gooseberries and a tanginess to it that would make it a good match for the scallops we picked up earlier at Braun’s.

Uh-oh.  The manager describes this as “semi-sweet.”  Too sweet for us!  It smells like honey and nutmeg, but actually doesn’t have much flavor.  There’s a trace of a chemical flavor I dislike, and we dump the last little bit of the small taste. 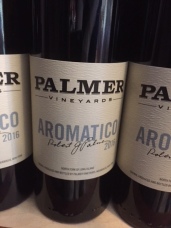 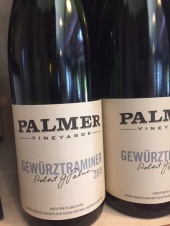 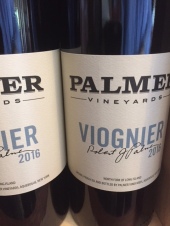 He pours this from a partly used bottle with one of those champagne re-sealing corks in it, and at the end I ask him if perhaps it had lost its sparkle by the time he poured our taste.  No, he replies, it’s just not a very bubbly sparkler.  My husband says it has NDA—no detectable aroma.  Not even the strawberry one would expect from a rosé.  It is at least dry, but if you want a sparkling rosé I suggest you seek out Croteaux’s.  Vintage liquor store in the Mattituck shopping center carries all of their wines now. 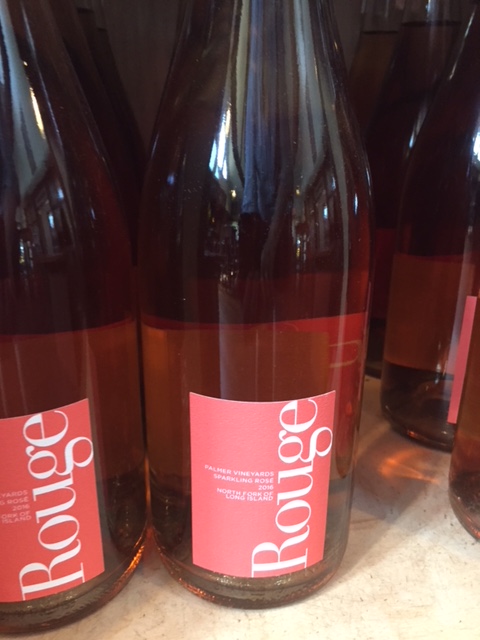 Not very sparkling and not very rose.

As I told my brother the last time we were here, merlot is the Ford of North Fork reds, the reliable grapes that almost everyone grows (despite the opprobrium they got in the movie Sideways).  As expected, it has a cherry aroma and flavor, plus maybe some purple plum.  Dry, with faint tannins and a short finish, it is aged twelve months in French oak.  You could have this with lamb chops, or even roast chicken, but it would not stand up to a steak.

Why Old Roots?  Not surprisingly, because these grapes come from the oldest vines on the property, dating back thirty-five years.  The grapes are hand harvested, and aged for eighteen months, leading to a slightly more intense merlot experience than the previous taste.  Lots of cherry flavor, but no depth, is our verdict.  Maybe you could have it with grilled sausages, like the ones 8 Hands Farm makes.

According to the menu, the tastes for this include “subtle cigar box.”  Not sure what that is, but there is a smokiness to the aroma.  Not complex, it has lots of fruit flavor and is pleasant enough to be a wine one could sip as an aperitif.

The previous wine is aged for twelve months, while this one ages for eighteen, and it is more complex.  The aroma includes fruit and tobacco, and we taste plums and other dark fruits.  Not much tannin.  I remember a dish I used to make, of tongue in a pickle sauce, and think this would go with that.

A glimpse of the covered porch. We decided to stay in the air conditioning!

Reasons to visit:  pleasant tasting room which looks like an English pub, plus a wide covered porch for outside tastings; the Aromatico and the Cabernet Franc; they serve pitchers of water if you ask; dogs are allowed outside.  Note—the first building you come to is a “self-guided” tour of the winemaking facility, so pull around to the back for the tasting room.

This is the first building you see, but the tasting room is around the back.