Unlike most wineries on the North Fork, Peconic Cellar Door is owned and run by women: Alie Shaper and Robin Epperson-McCarthy. It is another of the very small tasting rooms, and in fact adjoins last week’s site, The Winemaker Studio, but is even smaller. Despite its small size, however, it offers quite an array of wines to taste, under four labels: As If Wines, Brooklyn Oenology, Haywater Cove, and Saltbird Cellars. All the wines are now under the umbrella name Chronicle, with the tag line, “Every bottle holds a story.” Ask Robin (or whomever is behind the counter) about the logo, because it tells a story, too. 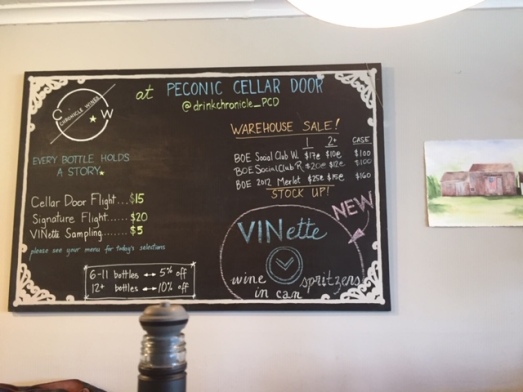 Robin was our server, and since there were no other customers, we had time to chat. There were a couple of visitors who came by just wish Robin and Alie happy holidays. Robin told us about her travels around the world to learn the craft and art of wine-making, particularly her six months in New Zealand, which influenced the style of some of her wines. She is clearly passionate about wine-making, and she and Alie have their own original ideas about it. We enjoyed all of their experiments.

The menu offers two flights, the Cellar Door flight, of five wines for $15, and the Signature Flight, of five higher-priced wines for $20. We decided to share the Signature Flight, and perhaps return for the Cellar Door, though Robin cautioned us that they change the options every month. Given that the price list includes 28 wines, I guess they can come up with quite a few permutations. We may have to go back more than once…

Though they don’t allow outside food (or pets), the only snack on offer is packs of cookies from local baker Ali Katz. I do recommend a visit to her little bakery and food shop in Mattituck (only open Fridays, Saturdays, and Sundays). We’ve only been there a couple of times, but found her baked goods excellent.

If the name of this wine describes how it came to be, it was a fortunate accident indeed. A blend of sauvignon blanc, chardonnay, and viognier, it is aged more than one expects for a white, particularly on the North Fork, where most whites are from the most recent vintage. This wine has a floral and mineral aroma, and is nicely dry. Some notes of lemony citrus, but also more depth than one expects from a white. As we sip, I find the viognier taste, which I quite like, coming through.

I thought this label was particularly pretty.

Of course, I have to ask about the name of this wine, which comes in a bottle with a very pretty painting of birds in flight. Robin explains that it is a reference to her own migrations, away from the North Fork and back, but also to the birds she loves. The making of this wine was influenced by her time in New Zealand. Though plenty of cheap sauvignon blanc comes here from there, the wines they keep for themselves tend to be made like this one, spending six months on the lees and aged in oak. When I note a faint oak taste, she mentions that “one of the barrels” was new oak, so it came out a bit oakier than she wanted. Overall, it is a good wine, with a nice mouth feel and a taste my drinking buddy compares to “drinking flowers.” Well, it does have an aroma that combines something vegetal with flowers. 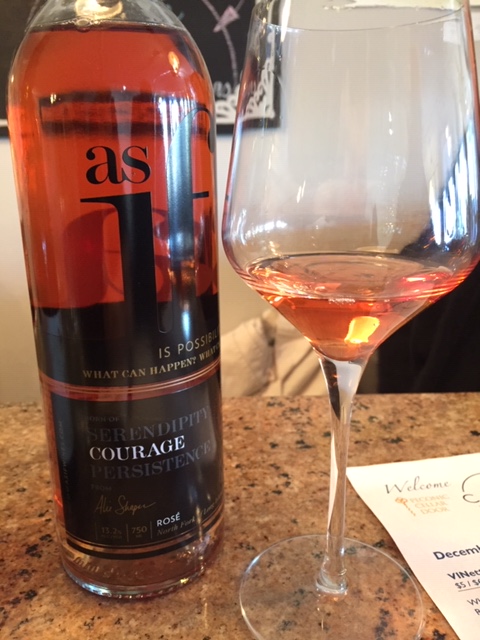 Robin calls this a rosé made from a Meritage blend. I guess it does take courage to make a rosé from merlot, cabernet sauvignon, cabernet franc, petit verdot, and syrah, a classic Bordeaux blend. She compares the aroma to buckwheat honey, and I agree. This is almost as much a very light red as it is a rosé. It has some strawberry and citrus tastes, but more depth (again) than your typical rosé. She suggests serving it with a pork roast, an excellent idea.

A blend of cabernet sauvignon and merlot, this is a wine they only make in good years, so there is no 2018 but will surely be a 2019. I’ve heard in several tasting rooms that this was a very good year on the North Fork, with the right amount of warm days and rain. It has some cherry taste, but is not really fruity, dry, with some tannins. Nice legs, if that means anything!

The array of our tasting.

I’m glad they persisted with making this wine, a blend of cabernet franc, petit verdot, and cabernet sauvignon. Despite the price, we decide to buy a bottle to save in the cellar for a special occasion. I think it could age a few more years, but it is also delicious to drink now. Fruitier than the previous wine, it has some interesting flavors, and could stand up to a steak.

Reasons to visit: another small winery, where you can talk to the winemakers and learn about what inspired them and how they made each wine; we liked all the wines, but especially the Serendipity and the Persistence; they change their offerings periodically, so you can go more than once; though they don’t allow groups larger than six, if you happen to be with a group you can split up, with some going to the Winemaker Studio, connected by an open doorway and a window in the wall.