This was formerly a fire house. 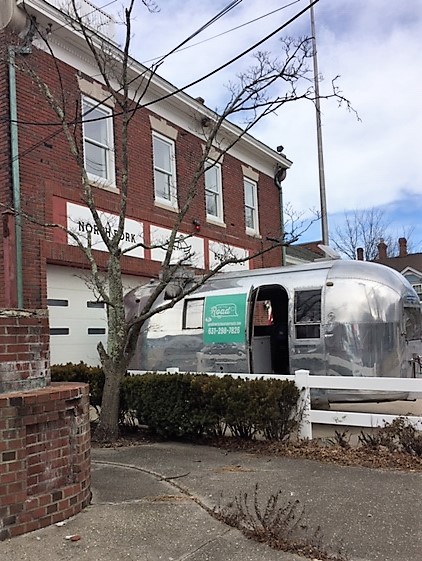 The Mattitaco truck outside the brewery.

Just a couple of blocks off Main Street in Riverhead, in a former fire house, we found the newest member of the Riverhead craft beer scene, North Fork Brewing Company, joining Crooked Ladder, Moustache, and Long Ireland.  We went there with our daughter and son-in-law, who are both beer lovers, and our two granddaughters, who sampled the home-made root beer for us.  The junior members of our group rated the root beer as very good, with a nice licorice flavor, not too spicy, and “goes well with a grape lollypop.”

With four of us, we were able to sample all eleven brews currently on tap.  If we had not just had lunch at Perabell (I recommend the thin-crust pizza.), we could have gotten tacos from a Mattitaco truck parked just outside the firehouse doors.  They also sell North Fork potato chips. 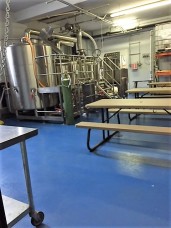 This back area was roped off, but I assume they use it when the space becomes crowded.

The space is medium sized, and subscribes to the frequent brewery esthetic of industrial chic.  I’ve noticed that many wineries evoke the rural scene around them, being housed in former barns or buildings that suggest farm structures, while breweries tend to be more factory-like, using repurposed car dealerships or firehouses or other industrial spaces.  Not sure why that is, and of course it’s not true of them all. 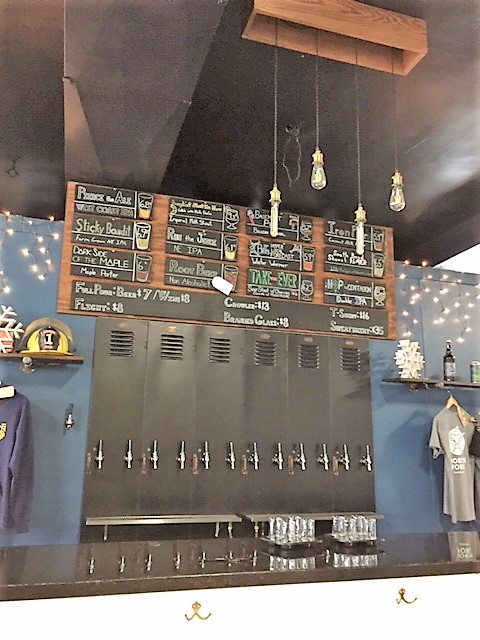 Note the taps made from re-purposed firehouse lockers.

The very helpful and accommodating server explained to us that a flight consists of any four of their brews for $8.  She handed out little cards on which we wrote down our choices.  The four little glasses were carefully placed in a carrying tray with numbers corresponding to the number on the card of each choice.  She noted that if we had trouble choosing, we could get a sip of the beers before deciding on our flight.  However, with a little coordination, we realized that we could easily try all eleven.  We gave up on a strict order of tastes, and there was no offer to suggest a succession, but we did generally try to go from lighter to heavier.  (We overheard a server note that they carry Bridge Lane red and white blend wines, for those who would prefer not to drink a beer.)

Overall, we agreed that the beers were interesting and quite varied, though we didn’t like any one enough to take home a growler.  Our son-in-law summed it up by noting that this was a good place to come to try lots of experimental beers, but most were too “in your face” to want a full glass to sip with a meal or on its own.

We have gotten take-out from Mattitaco several times, and liked every variety we’ve sampled so far.

The brewery prides itself on acknowledging its North Fork roots, including literally, in that they have a farm where they grow much of their hops.  This is a fresh, nicely hoppy IPA, with lots of grapefruit flavor.  I could definitely see having this with one of Mattitaco’s fish tacos, like the seared tuna one on offer from the truck.

This tastes like a joint, said one of us (anonymously).  It does have some vegetal notes, plus the grapefruit one expects in an IPA, in this case more like the pith than the fruit.

My daughter likes this the best so far of the IPAs, and said it would be refreshing on a hot day.  I said it was like a better version of a Budweiser beer, easy to drink.  This would also go well with a fish taco.

Some day I’ll have to come back and stand at the bar for my tastes so I can ask how they came up with some of these names.  This is a piney rather than a grapefruity IPA, and my daughter liked this one as well.

When we were in Belgium, I became very fond of the dubbel style of beer, which tends to be rich, with caramel and raisin flavors.  I also like Raisin Bran cereal, which the taste of this reminded me of.  Very good and refreshing.  If I were to get a glass of a North Fork beer, this would be one contestant.

On the other hand, if I were given a glass of this, I would say thanks but no thanks.  This is a dark, heavy sour beer, brewed with cherries, and tastes both sour and sweet. Last fall, I went to a brewery upstate that specialized in sour beers, and I never dumped so many tastes before.  I say bleh, but, in a perfect illustration of how subjective and individual taste is, this is my son-in-law’s favorite. 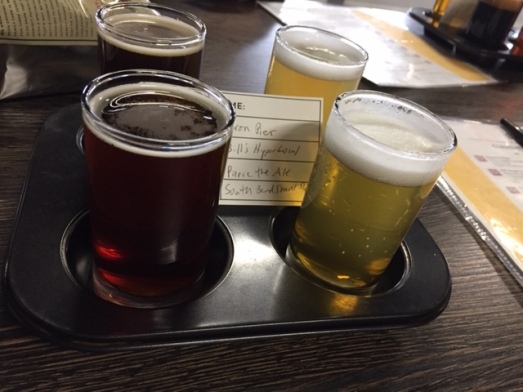 Contagion indeed.  This is very hoppy, and more bitter than I like, though balanced with some creaminess.

My daughter and I both like this one, which reminds me of the glasses of bitter I have had in many English pubs.  It is a bit on the light side for a porter.  My daughter says she could see enjoying this with a serving of Shepherd’s pie, and I agree.  Or maybe with the Mattitaco Ruben taco, made with corned beef.

I didn’t ask about this name, but I assume it refers to News 12’s tag line (this cable-company-sponsored channel specializes in Long Island news, traffic, and weather).  The brewery characterizes this as a “winter warmer,” and it evokes a pumpkin ale, with tastes of cinnamon, cloves, and nutmeg.  A bit too much cinnamon, though not bad in a small dose. 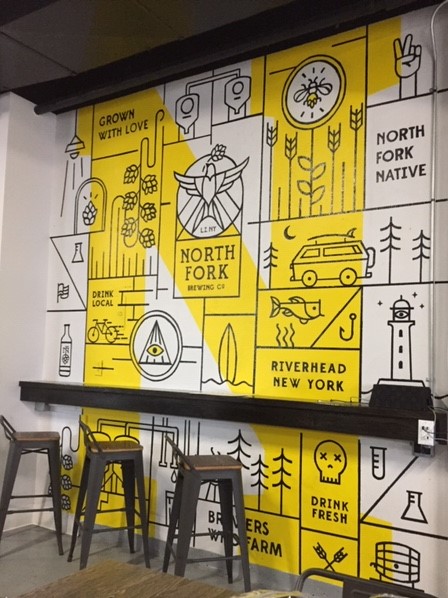 They kept the firehouse doors, though you enter through a small door on the side. I wonder if they open these in the summer.

I knew right away that I had to try this one, as it is made “in collaboration with North Fork Doughnut Company,” one of my favorite new businesses in Mattituck.  I also tend to like stouts.  This has rich chocolate tastes, and though my son-in-law characterizes it as “too sweet for a pint,” I wouldn’t mind sipping it in a pub, perhaps with an order of chips (a.k.a. French fries).  We are so inspired by our discussion of the North Fork Doughnut Company that our guests stop there on the way home to pick up some doughnuts for breakfast the next day.  One granddaughter, a Girl Scout, is delighted to get a Samoa doughnut, and the other is pleased to have snagged “the last chocolate doughnut!” Alas, they were out of the maple-glazed bacon flavor.

A Samoa doughnut from the North Fork Doughnut Company. Yum.

My husband and I just recently drove over to Iron Pier beach, on the Sound, within the bounds of Riverhead (so our Southold parking stickers are not valid there), and thought it seemed very nice, with a good-sized parking lot and a little playground.  This porter is made with coconut milk, and though I often like porters, this was not a favorite.  It has a slight metallic taste, which I likened to licking metal, perhaps the source of the name.

Reasons to visit:  you’re making the rounds of the Riverhead breweries; you like to try a wide variety of styles and experimental tastes of beer; the Mattitaco truck; the Pierce the Ale, Basement Pipe, Dark Side of Maple, and Dough’nt Stout Me Now (though, for some people the choices might be quite different!); a pleasant place with generous pours.