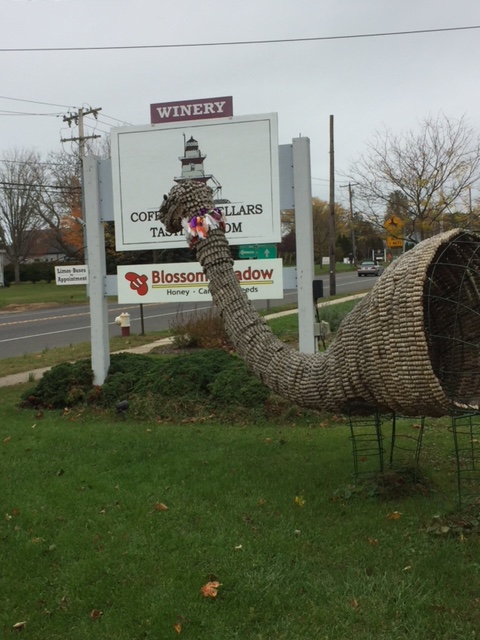 The name “Coffee Pot” refers to the lighthouse out near Orient Point’s shape, hence the name of the winery. They don’t serve coffee. And that’s a wineasaur, made from corks.

As we entered the cozy tasting room of Coffee Pot Wine Cellars, we were greeted by Beasley, the sweet-tempered pug who graces one of the labels: “Because we decided if Beasley drank wine, he would be a red wine drinker,” jokes Laura Klahre.  Laura is the co-owner of Coffee Pot Cellars, along with her wine-maker husband Adam Suprenant, and she is also a beekeeper and bee enthusiast. 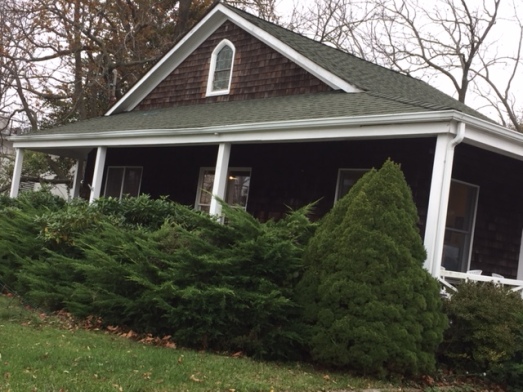 The tasting room is in a building that was once a house, which seems appropriate since the owners make everyone feel at home right away.

Every time we come there we learn something new about bees from Laura’s lively explanations.  This time we learned about mason bees—not to be confused with carpenter bees—which like to nest in hollow grasses and are excellent pollinators (about which more later), though not honey makers.  That morning she had been harvesting mason bee cocoons, which she happily showed us. 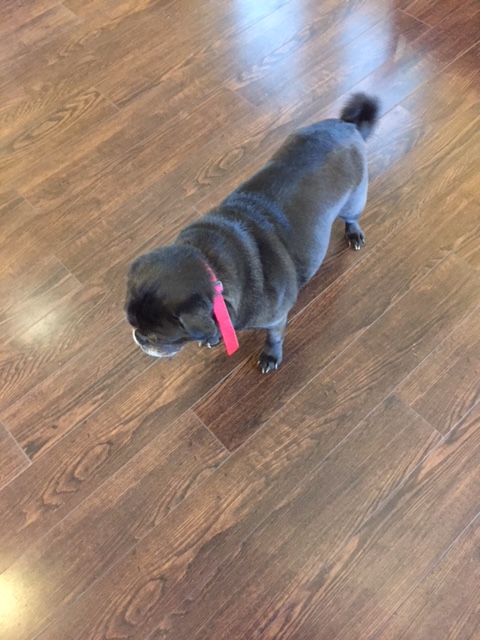 Meanwhile, she also gracefully served a bar full of people (some of whom had brought their own snacks), keeping track of where everyone was in the tasting of six—actually seven—beverages.  I say beverages because the listed tasting is of six wines for $12, but she adds in a taste of their Cyser, a champagne-like cider beverage made with apples and her own honey.  She was quite the busy bee!  (Sorry, couldn’t resist.)  As to the delicious honey, we have bought it in the past and wanted to get more, but she was all out, as she needs to leave some for the bees for the winter.  Next time we’ll stop by in the summer to pick some up.  In the summer you can also observe a demonstration hive of bees as they busily go about their “beesness” behind a glass window.

The tasting room consists of a bar with bar stools plus shelves lining the walls, featuring Blossom Meadow bee-based products.  No tables. 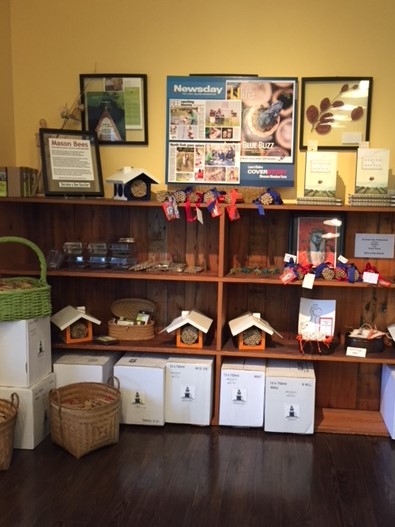 Some of the items for sale. 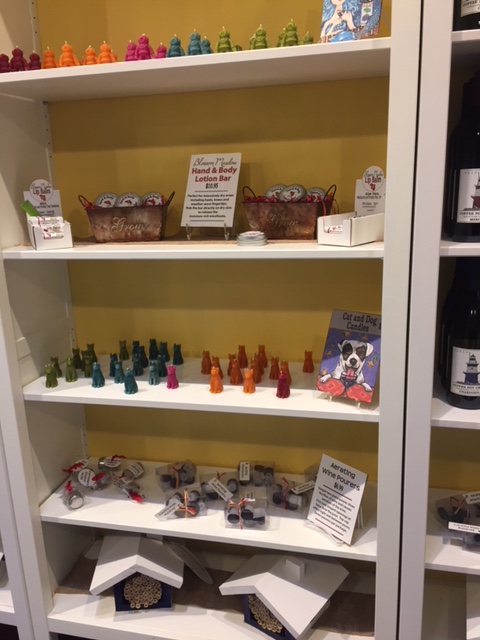 The little figurines are beeswax candles.

Laura was excited we had come that day, since they had just released their latest merlot.  Adam is also the winemaker for Osprey’s Dominion, where he uses some space to make his own wines.  They buy their grapes, Laura explained, having decided they would rather stay small and control exactly what they wanted to make than expand to own a vineyard as well. 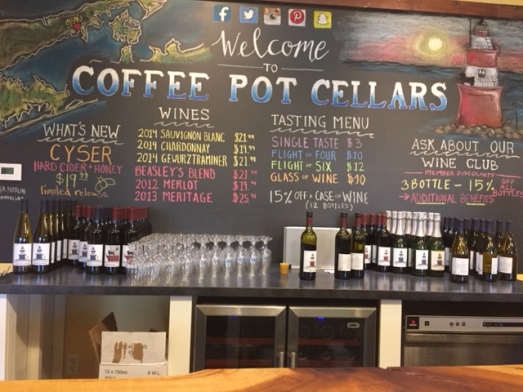 Spending six months in steel, this is a “nice and crisp” sauvignon blanc with aromas of mineral and honey and tastes of lime, melon, and mineral.  Nicely dry and very drinkable, it would be great with local oysters or scallops. 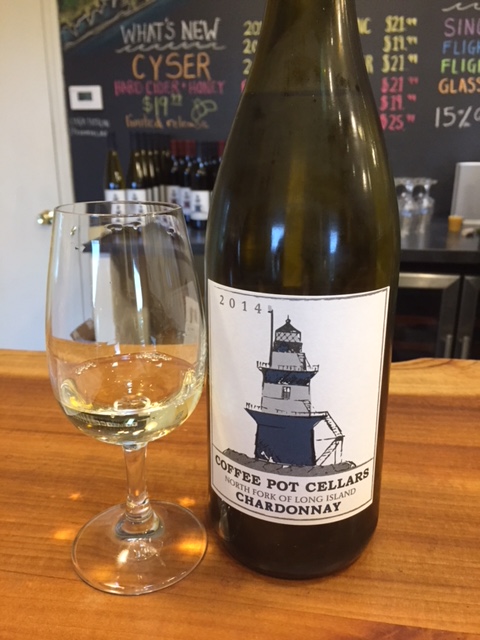 You can clearly see the Coffee Pot lighthouse on the label.

If you don’t care for an oaky chardonnay, but you find steel-fermented ones too tart, you might like this chard.  It spends six months in “neutral oak” barrels, which Laura explains to another guest is just a fancy way of saying “used,” so it is a little softened but has only a touch of wood.  I smell peach and rocks and taste citrus and maybe also a little peach.

According to the tasting menu we should be having the gewürztraminer, but Laura suggests the Cyser works better at this point, and who are we to argue?  This is a hard cider which Adam makes into a sparkling wine using the méthode champenoise.  He only makes 90 cases, since it is very work-intensive to produce.  And the bees work hard, too, Laura explains.  The mason bees pollinate the apple orchard, and then the honey bees provide honey which is added to the cider.  Despite the honey, this is a dry drink, fizzy and fun, tasting like a green-apple-flavored champagne.  It is only 7 ½ % alcohol. 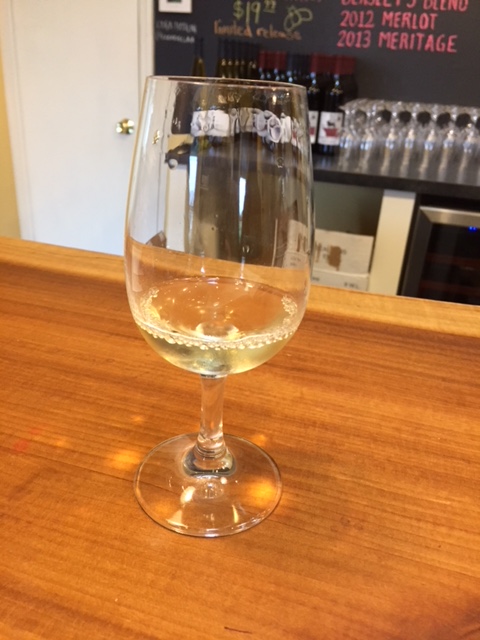 Thinking ahead to Thanksgiving, we decide this gewürztraminer would be perfect with turkey.  Made with 12% riesling, it is nonetheless dry, with lots of tropical fruit flavors.  The tasting menu mentions lychee and pineapple, and I agree.  The aroma is fruity, with some vegetable notes.  Some gewürztraminers are so sweet that you would only want them as a counterpoint to spicy food, but this one is not.  Laura confides that when Adam makes roast chicken for dinner this is the wine she brings home to drink with it.  Sounds good to me.  We decide to bring home a bottle as well.

As we switch to reds, Laura gives us a fresh glass.  She also rinses glasses with a few drops of wine, which she then pours out into the dump bucket.  She noted that she works hard to keep those buckets cleaned out, since otherwise they attract fruit flies at this season, something we’ve noticed at other wineries.  This is a pleasant, simple, very cherry-flavored merlot.  It is nicely dry, with plenty of fruit, a good wine for pasta or pizza. 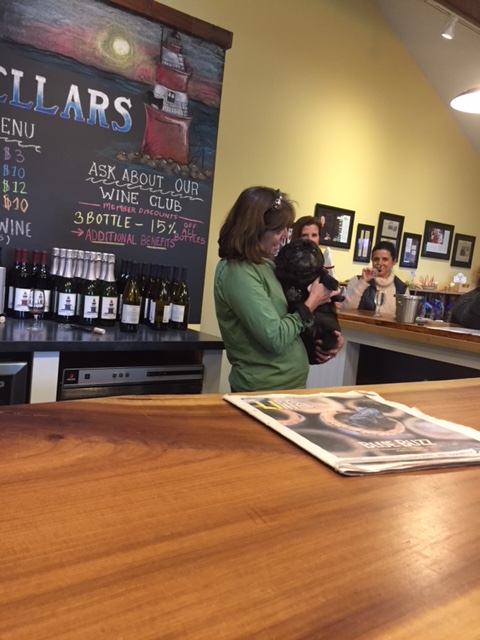 Beasley want to know how everyone likes his Blend. Laura says that at home, when she is getting ready to come to the tasting room, Beasley follows her around so she won’t leave without him.

Apparently, Beasley likes cabernet franc more than merlot, since this is a blend of 60% cabernet franc and 40% merlot.  Beasley has good taste, as we like this very much.  The aroma is of fruit, cherries and dark plums, and the taste is layered, with those fruits plus more.  Nice tannins.  We decide to get a bottle of this, too, to have with beefy entrees, such as pot roasts. 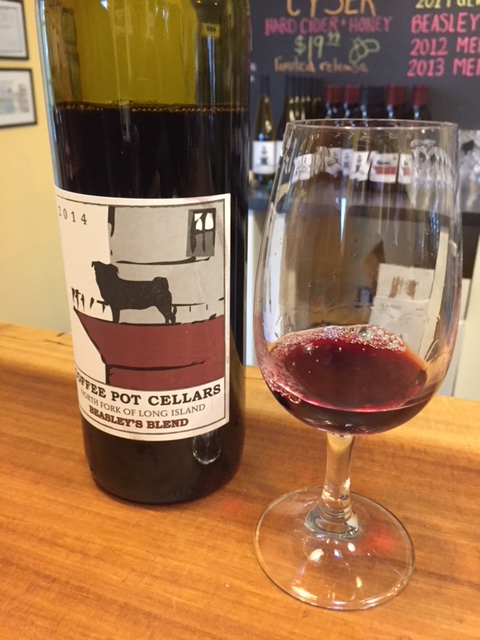 Note the image of Beasley standing guard on the lighthouse.

A Right Bank Bordeaux blend, this is 56% merlot, 22% cabernet sauvignon, 11% petit verdot, and 11% cabernet franc.  As you might expect (though it’s not always true), this is a fairly complex wine, with tastes of dark fruits and spices such as nutmeg and lots of tannins.  Supposedly, one only makes a Meritage in a good year, and clearly 2013 was a very good year. 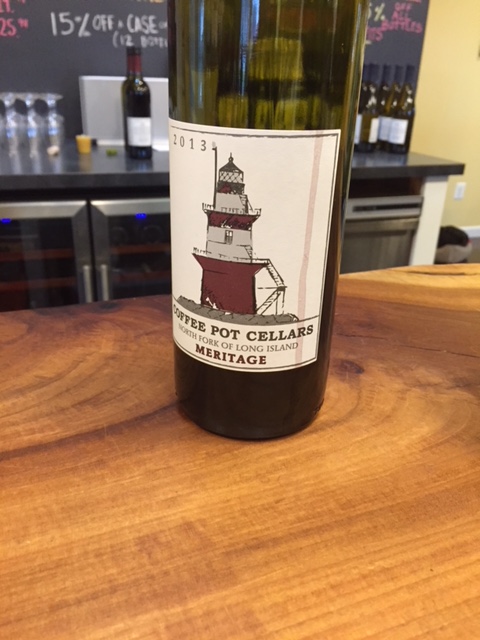 Reasons to visit:  a chance to talk with Laura and/or Adam, both of whom are quite fun to talk with (though Adam had left before we got there that day); lots of bee and wine related gift items, including clever little beeswax candles; all the wines, but especially the Gewürztraminer and the Beasley’s Blend, also the Meritage; Beasley; the demonstration hive in the summer and monarch butterflies in the early fall; everything you ever wanted to know about bees. 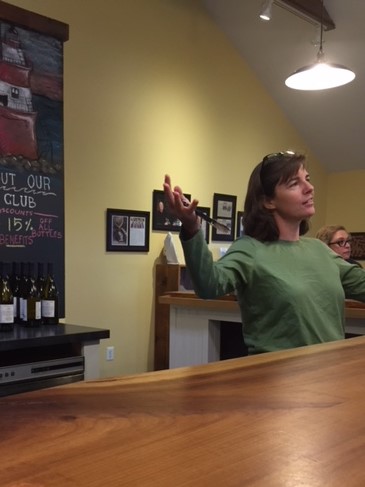 Laura in the midst of one of her lively discussions of bees.