There are always changes out here in wine country.  New wineries open, some close, others merge, and menus change with each new harvest.  Lieb Cellars has made some alterations in their tasting room options.  Their Oregon Road facility (see my entry from last August for a description of that tasting room) still has the full panoply of Lieb wines, while their Sound Avenue room has been re-named The Tasting Group and now offers two menus:  Lieb’s Bridge Lane line (their less expensive offerings) or the “featured flight,” which features wines from a variety of labels which use the Premium Wine Group wine-making facilities behind the tasting room.  Either flight includes some very good choices.

We opted to each get our own flight, sharing tastes as always, and I took the Bridge Lane option, which includes 5 tastes for $12 from the Bridge Lane menu.  My husband took the featured flight, also 5 tastes, though with no options, for $14.  We were accompanied by family members, with the three year old distraction and her two month old sister opting to spend their time outside at one of the picnic tables on the lawn, admiring the grapes and just generally running around.  On Friday evenings Lieb has what they call “Firefly Fridays” out there, with music and glasses of wine on offer from 6-8 p.m. 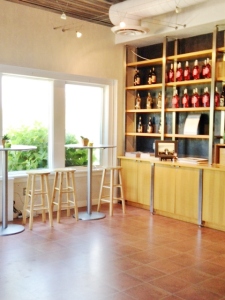 One view of the tasting room

The room itself is a bit small and somewhat spare, with a tasting bar and a few small tables.  Our server seemed quite knowledgeable and enthusiastic, and attempted to make a red wine convert out of another customer who kept insisting she only liked whites, though to no avail.

I’ll give you the Bridge Lane wines first, then the others.

Very dry, somewhat mineral-y, and reminiscent of a Prosecco, this is a bit too seltzer-ish for me. 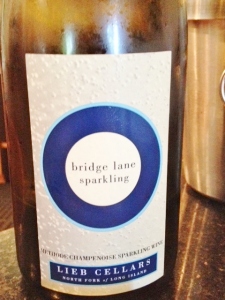 I liked the bubbly label.

Unoaked, our server notes, so a good choice for those who dislike the California style of heavily oaked chards.  This is light and lemony and very buyable.

Since we were just recently at Croteaux, of course I have to compare this to their wines, and it’s fine, but not as good.  A blend of cabernet franc, merlot, and gewürztraminer, this has typical strawberry aroma and is pleasantly dry, but could use more complexity.

Though this is called merlot, it is also 24% cabernet sauvignon and cabernet franc, grapes which I think always improve a merlot.  For the price this is a really good option, with lots of berry flavors though not much aroma.  Very buyable, which we do.

Now for the Featured Flight.

Perhaps you were wondering where in Brooklyn grapes are grown?  The grapes for this wine come from Upstate New York and are processed here in Mattituck.  The wine is very, very dry, with lots of tart lemon flavors, so would be better with food than sipped on its own. 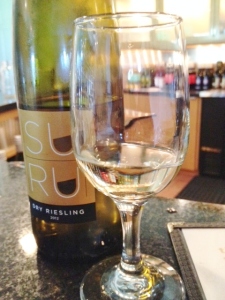 The SUHRU Riesling got some favorable comments.

We’ve encountered SUHRU wines before, in The Tasting Room (now under different ownership as The Winemaker’s Studio) so we knew that they are made by Russell Hearn, Lieb’s winemaker, and his wife.  As the name promises, this is a dry Riesling.  It has a touch of that cat pee smell, but tastes fine, with good fruit—maybe gooseberry?  Our relatives really like it.

“Not a lot of character,” offers our relative, and we agree, even though you’d think a blend of cabernet franc, cabernet sauvignon, and merlot would be more interesting.  There’s a touch of that earthiness some North Fork merlots have in this dry rosé.

Where did the name T’Jara come from?  Our server tells us that this is Russell Hearn’s premium label, only made in good years, and, since he is from Australia, he decided to name it for an Australian tribe.  Aged in oak, this is a very good merlot, with plenty of berry tastes, dry but not too dry. 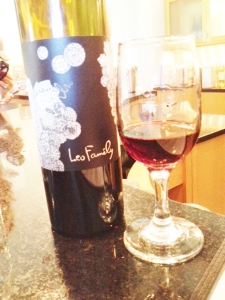 We liked this the best of the wines sampled today.  A Bordeaux blend, this is a wine one could happily sip on its own or pair with pork chops.  It’s a bit on the sweet and soft side, without a lot of tannins, made by the Clovis Point winemaker.  It also has a really pretty lacy pattern on the label.

In addition to bottles, one can also buy some of the wines in a box!  A box of White Blend or Red Blend is the equivalent of 4 bottles, we are told, costs $46, and can last three weeks after being opened.  We opt instead for two bottles of the Bridge Lane merlot as an everyday table wine, our relative goes for the SUHRU Riesling, and one of our three tastings is complimentary.

Reasons to Visit:  the chance to try a variety of wines from various winemakers, in addition to Lieb’s own Bridge Lane line; the Bridge Lane chardonnay and merlot; the Leo Family Red Blend (If I were here for a Firefly Friday, I would get a glass of this if it were on offer.); the SUHRU Riesling; a pleasant outdoor space for a glass and a picnic.  We often see groups enjoying the Firefly Fridays, but have not had the chance to do so ourselves yet. 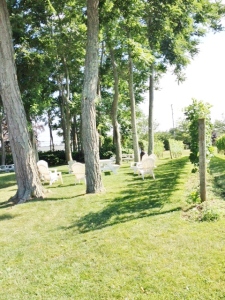