The entrance to Palmer’s tasting room is in the second building on their property.

Our plans for a garden-setting wine tasting having been scuttled by a completely un-forecast deluge, we decided to head to Palmer Vineyards, which has a cozy tasting room with pub-like booths and an expansive covered veranda.  We settled on the veranda where, our guests were happy to learn, their very well-behaved dog was welcome to join us.  When a singer/guitarist with a folksy sixties-ish repertoire began to play, we settled in for a relaxing afternoon. 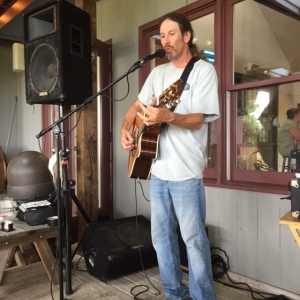 We enjoyed his performance.

The tasting menu offers four different flights, ranging from $15-$18 for four tastes each.  We (three couples) decided each couple would share first a flight of whites and then a flight of reds.  We gave the flights labeled “Sweet” and “Steel vs. Oak” a pass.  Maybe next time.  They also have a couple of local beers on tap, plus coffee.  My cousin bought a $16 “charcuterie platter” for the table, which was fine but rather meager for the six of us, consisting of a few slices of two different sausages and I believe two different cheeses, plus Carr’s Water Crackers and a few other odds and ends.  Since they don’t allow outside food, I think they could do a better job with their edible offerings.  We didn’t try the “brick oven pizza.”  However, we had an enjoyable afternoon tasting the wines, listening to the music, and chatting about everything. 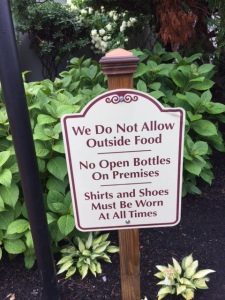 The “charcuterie platter” and some whites.

The server informs my brother that they are the only vineyard on the North Fork to use this grape, and he may be right.  Albariῆo is one of my go-to wines when I order just a glass of wine, as it is generally fairly dry with good fruit tastes, and this is no exception.  Although there is some disagreement around the table, I find it delicious, with a touch of lemon at the end and tastes of apricot and apple.  It smells like honeysuckle, peach, and minerals.  Having it with a bite of cheese helps smooth out the sourness of the citrus at the end.

“Great nose,” opines my brother.  “It smells like lantana flower,” says my sister-in-law.  I don’t know what that smells like, unfortunately, but there is definitely a flowery aroma.  The taste is rather orange-y, perhaps like a minneola.  “Just lovely,” says my Canadian cousin-in-law.  “It’s got some strength to it,” says my cousin.  We all agree that this has the best balance of any of the whites, and would be good to sip by itself or with the scallop ceviche my brother and sister-in-law intend to make for dinner.

The bar on the veranda

Our server (we send a representative to the bar to pick up each round) thinks they are also the only ones to use this grape on the North Fork, but I happen to know at least four or five other vineyards use it.  In any event, this is not a crowd pleaser.  “Not a lot of character on the nose,” asserts my brother.   I smell minerality and not much else.  This is a light dry wine, with some earthiness.  We discuss whether it would be good with the oysters we also plan to pick up, but decide maybe not.

We all smell and taste pineapple this time.  Someone smells vanilla, and someone else says the smell is “earthy.”  “Not integrated,” says my brother.  I think it would be better with food, and take a bite of sausage.  Yes, that does improve it.  However, the overall opinion of the whites is “fine, but no home runs.”

Syrah is my other wine-by-the-glass standby, and this one is an acceptable version, though not my favorite.  I like syrahs to be bigger and bolder, and this one is a touch thin.  It may need more time to age.  The aroma is sweet, almost like a sherry.  The server told my brother that this spends two years in oak, and they add a bit of viognier to “lighten it up.”  It is lighter than most syrahs, with almost no finish.  You wouldn’t want it with steak, but it might be nice with some Crescent Farms duck breast.

The indoor space is particularly nice in the winter.

As I explain to my guests, merlot is the Ford of North Fork reds, a generally reliable red.   My brother characterizes this one as “an art opening wine,” and I see what he means.  Not distinguished, but also not offensive, it has some cherry tastes with a medium body and medium tannins.

Mmm.  The aroma is brambly and peppery and the taste is sweeter and fruitier than expected.  Soft tannins.  We also note some herb and fig tastes.  Yum.  Just then the singer starts “Here Comes the Sun,” and indeed it does appear.  A bachelorette party forms a line on the wet grass with the veiled guest of honor in the middle for a photo shoot.

The bachelorette party organizing for a photo.

Dark figs and earth and peppers with just a “soupçon of paint thinner.”  Not so sure about that last bit!  I like it, and it’s very nice with one of the last bits of cheese, which lends it some creaminess.  It is also a wine one could sip on its own.  My husband thinks it might have needed to breathe longer.  We all agree it is good, and has “the most character.” 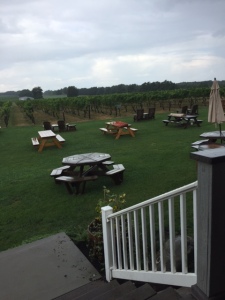 Our tasting is done, the sun is out, so we leave to take a walk on the beach.

I wonder what the pooch would have said about the nose.

Reasons to visit:  pleasant tasting room with cozy booths for the winter time and a breezy veranda for the summer; the sauvignon blanc, the cabernet sauvignon, and the cabernet franc; dogs are allowed on the veranda. 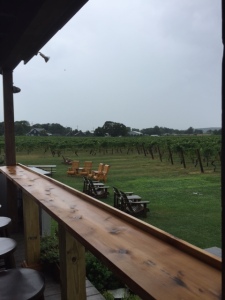 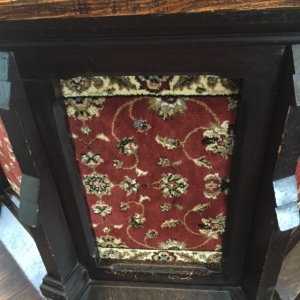 I like this pattern on the side of the bar.