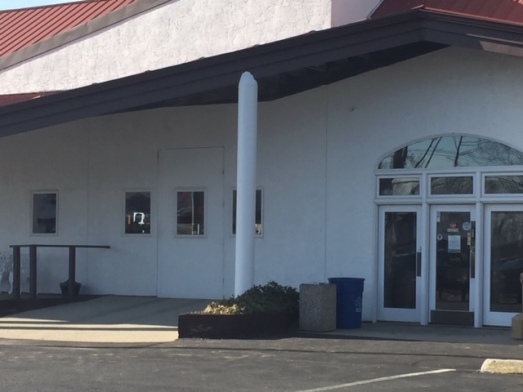 We thought it was safe, on this cold day in January, to go to Pindar for a quiet tasting.  Nope.  When we entered, a group of young women were having a wonderful but excruciatingly loud time at one end of the bar.  However, we could see that they were almost done, so we stayed and prepaid (as requested) for two tastings.  Halfway into the first five tastes, they left—only to be replaced by two bus loads!  Our server apologetically explained that one group had arrived early for their reservation, while the other arrived late, hence the crowd of almost forty women around the bar. 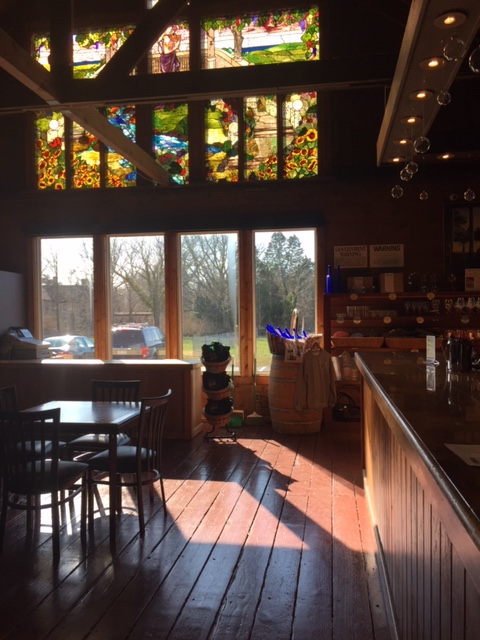 Don’t let the serenity of this image fool you. Just off to the right there’s a noisy crowd at the bar.

We decided we could see why Pindar is popular with the limo group.  The pour is generous, the bottles are reasonably priced, and most of the wines are easy to drink and rather on the sweet side.  That is also true of the other wineries owned by the Damianos family:  Duck Walk and Jason’s.  Though the founder, referred to fondly by staff as “Dr. Dan,” has passed, clearly his legacy lives on.

The tasting room is large, with several oval bars plus a number of tables, at one of which two women were attempting to enjoy their glasses of wine and a game of Scrabble.  We commiserated about the noise.  By the way, if you need the restroom you need to walk out of the tasting room and across the outdoor porch to find it. 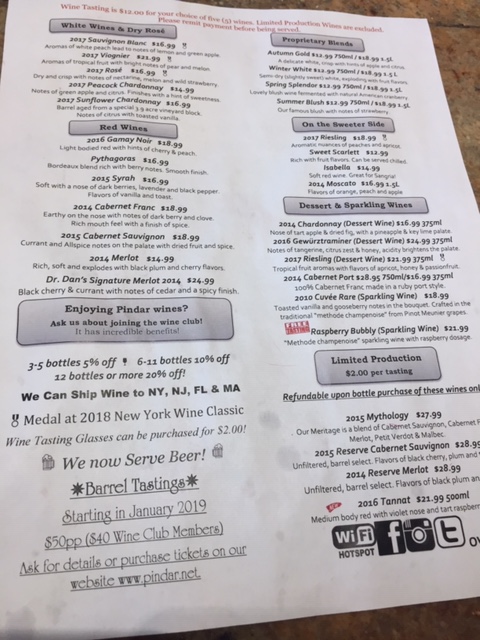 A tasting consists of five wines for $12, selected from a list of over two dozen wines.  We chose our ten tastes with some help from the well-informed but sorely over-worked server.  He clearly would have liked to hang with us and discuss what we did and did not like, but once the third group arrived, he had plenty of work on his hands.    Not wanting to prolong the experience, we decided not to order a cheese tray, which consists of a cheese you choose from their cooler plus crackers for $10. 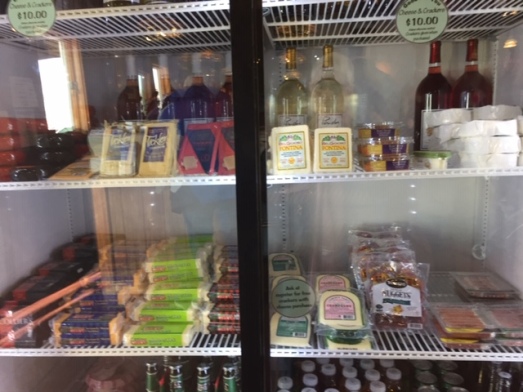 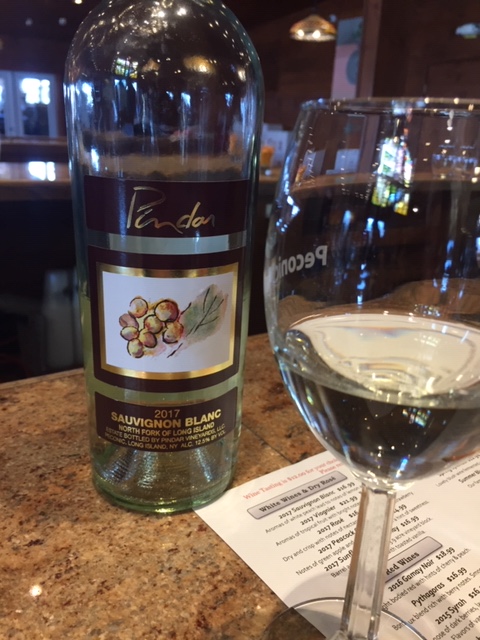 I generally think of North Fork sauvignon blancs as perfect matches for Peconic Bay oysters.  This one had a promising aroma of Granny Smith apples and lemons, and an initial tart flavor, also of lemon and green apple.  However, it ended a bit too sweet.  We liked it enough to imagine drinking it as an aperitif on a hot day, or pairing it with New England clam chowder, but it lacked that minerality we like with oysters. 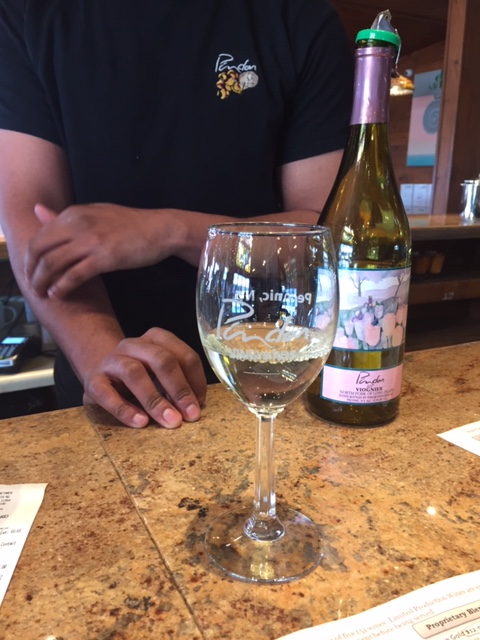 The pretty label has quite a story behind it.

Not that many NoFo wineries feature viognier, so we knew we wanted to try this one.  The aroma was somewhat funky, and my tasting buddy compared it to wet cardboard.  Fortunately, it tasted better than it smelled, though the taste was rather simple.  “It tastes like white wine,” he declared.  Ha ha.  Basically, it has a sort of generic white wine taste, with some unripe peach flavor.  The label is very pretty, a painting of flowers made by a quadriplegic patient of Dr. Dan.  She made it by holding a brush in her mouth!  Quite an achievement.  Her art also adorns the Syrah. 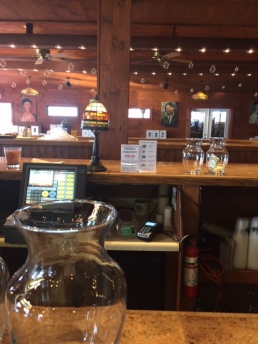 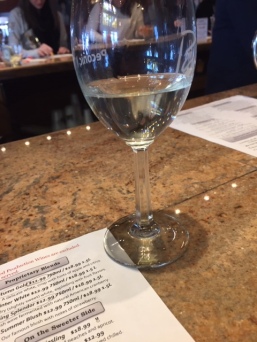 Our server explained that this blend of seyval blanc, Cayuga, and chardonnay is “like a pinot grigio.”  That sounded good, since I like pinot grigios.  However, I felt it mainly tasted like a typical North Fork steel-fermented chardonnay, with a combination of citrus and a touch of peach.  Drinkable. 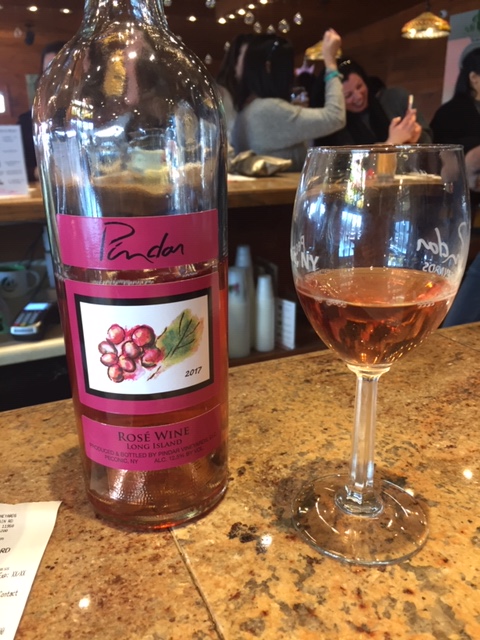 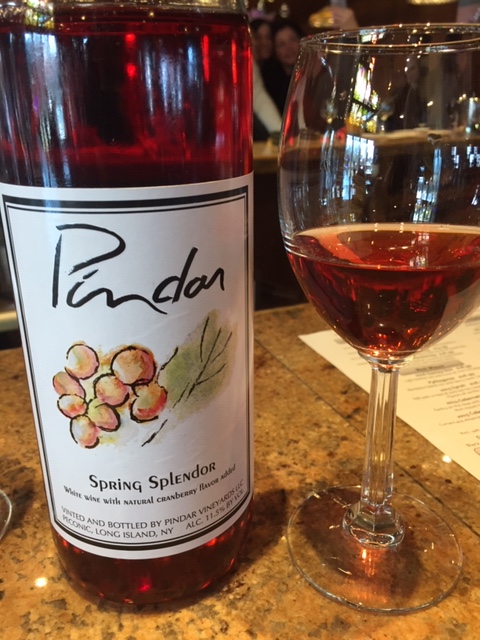 I should have known that I wouldn’t like this one, based on the description. Oh well.

I was curious to try this because the menu describes it as “fermented with natural American cranberry.”  It has a pretty pink color, tastes like a slightly alcoholic cranberry juice, and I suppose one could use it to make a wine-based cocktail. Too sweet. We dumped the rest of our taste.

This label reminds us of the 20s-inspired labels at Duck Walk.

If you are out to dinner and one person orders fish or chicken and the other orders meat, but you want one bottle of wine, this would work.  It is a very light red, like a less fruity Beaujolais.  It is dry, with no tannins, and rather mono-dimensional.  Drinkable. 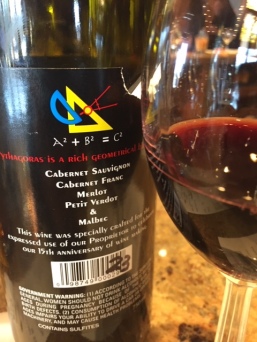 The name of this wine and the name of the winery are nods to the Damianos family’s Greek roots, in case you were wondering why a wine is named for that annoying theorem you had to memorize in high school geometry.  This is their Bordeaux blend—cabernet sauvignon, cabernet franc, merlot, malbec, and petit verdot.  The fragrance reminds me of stewed prunes, and the taste also has some purple plum notes.  The wine is dry, with soft tannins, and is good but not deep or complex.  My husband says it is a “teeny tiny Bordeaux.” 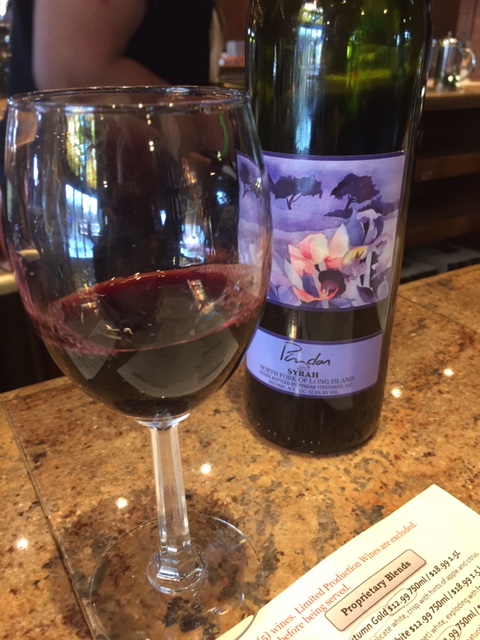 Another pretty label, and our favorite wine of the day.

This one, as my grandma used to say with the birth of each grandchild, beats the bunch.  Though our server apologetically explains that is it “not as bold or peppery” as some syrahs, we quite like it.  I say it smells like blueberries, and my husband says blackberries.  It tastes of those berries and plums, with nice tannins.  It would go well with lamb—or, we decide, as we buy a bottle, with the eggplant parmesan I’m making for dinner. 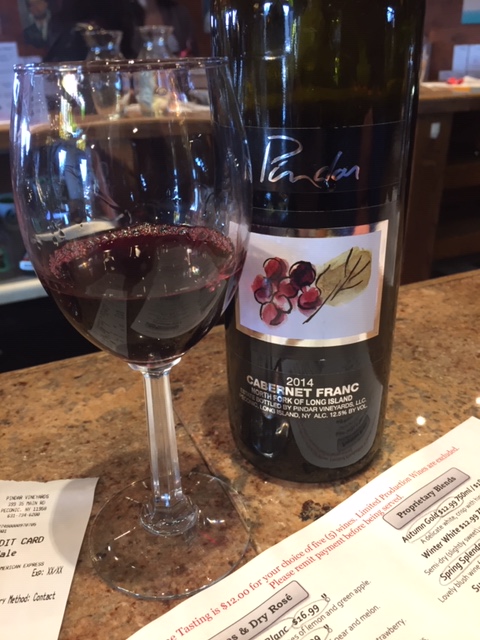 I say it smells like “forest floor,” and my husband adds “auto repair shop.”  Really?  Then I sniff some more and get it:  rubber, metal, some sort of chemical spray.  Our server notes that he just opened the bottle, and it probably needed more time to breathe.  (Given how many people he is serving at once, he could probably use some time to breathe as well!)  It tastes pretty good, however.  We get dark fruits, cherries, spice, and chocolate. 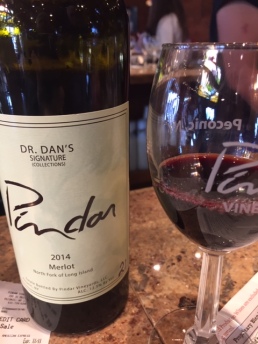 We get a new glass for this special wine, which is aged 32 months in French oak and made with grapes from 40-year-old vines.  It smells delicious.  It has the dark cherry taste of North Fork merlots, plus blackberry and a touch of vanilla.  Though it is not complex, it is good.  We decide overall we prefer the reds to the whites.

No, this is not a special extra because of the book.  The menu highlights it as a free taste.  It is listed as “’méthode champenoise with raspberry dosage,” and, having noted our likes and dislikes, our server offers this somewhat apologetically.  It tastes like raspberry soda, and one sip is enough for us.  We leave the rest of the taste in the glass, thank our server, and go buy a bottle of the syrah.

We found this calico cat sunning herself on Pindar’s porch.

Reasons to visit:  it is winter and you are hoping for a quiet tasting—but don’t count on it; the sauvignon blanc, the syrah, the cabernet franc, Dr. Dan’s Signature Merlot; they also serve you need a place that will accommodate a large group.

Not sure if you can read this, but this hand-written sign was at the entrance to the Pindar driveway.