Today, for Valentine’s Day, Newsday ran a nice little piece, “Perfect Pairings,” about wine and food pairings. But they missed an opportunity, which Nofowineaux will attempt to remedy.  For example, they mentioned Peconic Bay oysters, but not the Long Island wines one could drink with them.  So what follows is my own list of the foods and types of wines they mentioned, updated with my own recommendations of local wines to use.

We get a new red-wine-friendly glass with the reds. 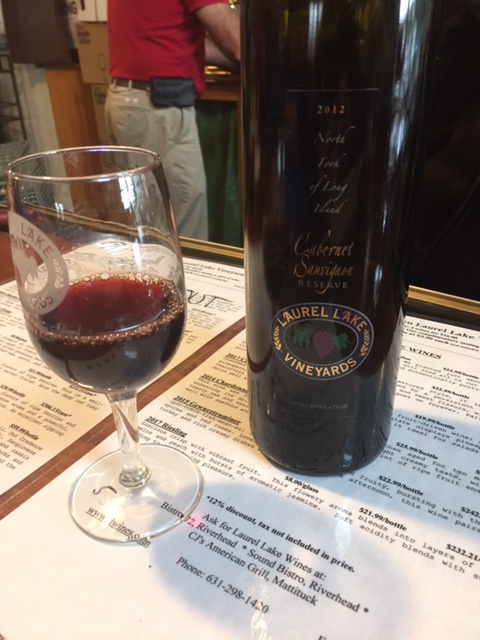 Chianti would be perfect, of course, and it is made with the sangiovese grape, which is found on Long Island in a few places.  Try the sangiovese from Pugliese, or the Meritage from Laurel Lake, a blend that includes sangiovese.

The second three of the still wines. A coaster under each glass identifies the wine.

They say a steel fermented chardonnay or a rosé.  Of course, as soon as I hear rosé, I think of Croteaux, which has lovely dry Provençal-style rosés.  For a steel chard, my favorite is Channing Daughters Scuttlehole Chardonnay. 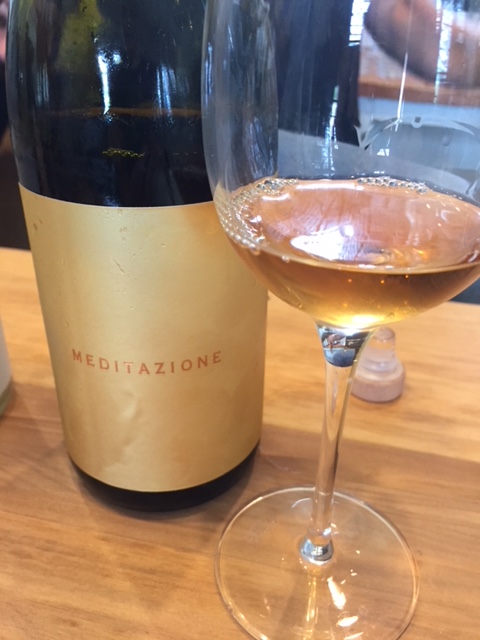 Aside from my own kitchen, I don’t know anywhere on the North Fork to get Indian food.  When I make Indian food (as I did last night, making curried cauliflower and cucumber raita), I like to pair it with a slightly sweet white, which is also what Newsday suggests.  They say use a gewürztraminer, and you have three good options on the North Fork:  Osprey’s Dominion, Coffee Pot Cellars, or, my preference, One Woman.  We drank Meditazione from Channing Daughters, a delicious orange wine made from a blend that includes gewürztraminer.

There are lots of good options for white fish fillets at Braun’s, and there’s almost always cod.  Newsday suggests a sauvignon blanc.  Almost every winery has a drinkable sauvignon blanc, but I prefer Channing Daughters to most of the others.  It is nicely dry, but has enough fruit to give it taste.  Other good ones: Diliberto’s, Duck Walk, Clovis Point, and Coffee Pot Cellars.

Two sources of good beef are Wayside Market and 8 Hands (though 8 Hands doesn’t always have beef—check their web page or call before you go).  As to wines, Newsday recommends either a cabernet sauvignon or a sparkling wine (and many people believe sparkling wines go with everything).  Big reds are in short supply on the North Fork, but Laurel Lake has a Cabernet Sauvignon Reserve that’s pretty good.  Sparkling Pointe, of course, only makes sparkling wines.  Their Brut Magnum is lovely, but if you don’t care to buy a huge bottle you could try Roanoke Vineyard’s sparkling wine.

The sparkler and the chard

In general, I like sauvignon blancs with oysters.  I find the lemony taste of the wine complements the bivalves very nicely.  They suggest a Muscadet or a sparkling wine.  You might try the Sherwood House blanc de blancs, or one of the above suggestions. 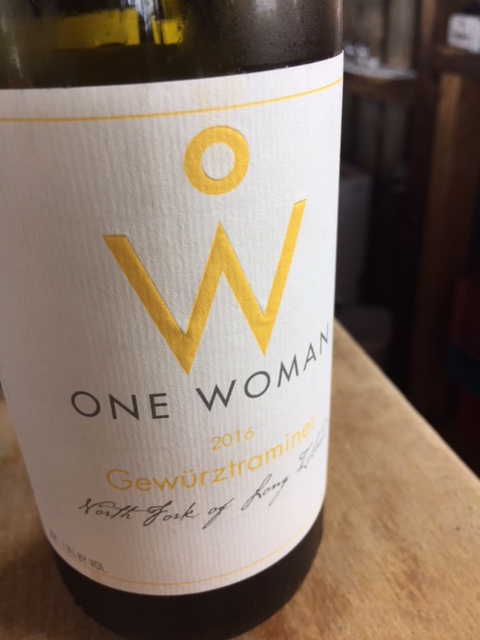 As Newsday notes in its article, it is often hard to pair wine and vegetables.  They suggest a grüner veltliner with this dish, and I agree.  One Woman makes a grüner that is one of my favorite North Fork whites.

As with all suggested wine and food pairings, personal taste is paramount.  If you just don’t like red wines or white wines (but why?), just go with what you like.  A light red can go with fish or chicken, and a heavy white, like an oaked chardonnay, can go with meats.  However, I can’t picture having any white with steak.  Instead, have a beer! Happy Valentine’s Day.

Juan sat down next to us at the bar and explained his ideas about winemaking.  Although there were several large groups at Laurel Lake, and Juan was actively helping to serve them, he and the servers behind the bar also took the time to answer our questions and solicit our opinions about the wines—which were largely favorable except for one, which I will discuss later.  Introduced to us as “our winemaker from Chile,” Juan told us that he enjoys talking to customers and finding out what they do and do not like about his wines.  “The wines reflect the personality of the winemaker,” he told us, including whether the winemaker is a man or a woman.  If so, then Laurel Lake’s wines should be outgoing and friendly and easy to like.

The main tasting room manages to be both spacious and cozy.

The menu offers flights of four tastes for $15, of a fairly generous pour, out of seven whites and nine reds.  We opted to share a flight of whites and a flight of reds, skipping, for example, the rosé and the moscato.  We also skipped the riesling, which we noticed comes in a pretty blue bottle.  That price has actually gone down from our last visit, in 2014, when it was three tastes for $15.  In general, the prices for the wines are quite reasonable.  We noticed people eating snacks brought from home, although once their food truck arrives Laurel Lake no longer permits outside snacks.

The music group on the porch, with a view of a group enjoying the warm weather outside.

As we sipped, a music group set up in the large porch to one side of the attractive tasting room.  The large groups also headed outside, so the main room remained relatively calm.  We also noted a small but amusing collection of wine-related gifts.

Some of the gift items

We don’t need a mouse pad, but if we did…

Pinot Gris is the French equivalent of Pinot Grigio, one of my frequent choices when opting for a glass of house white, as it tends to be reliably dry.  I would be perfectly happy if I had gotten this as a glass of house wine, as it is dry and mineral-y, with a touch of sweet fruit.  It smells a bit like asparagus, we decide, wondering if our current diet of local asparagus has influenced that thought.  Lobster bisque, we decide, would be a perfect pairing.

This is their steel fermented chard, with an aroma of not-quite-ripe pineapple and some mineral.  The taste is again a combination of dry and a touch of sweetness, and fades quickly.  Evanescent, we say.  As the wine warms a bit in the glass we also taste a hint of pineapple or tropical fruit.  We note that people coming to the bar are quite insistent about wanting their wines really cold.  We prefer wines not quite as cold, so you can really taste them.  I decide that chicken cordon bleu would be a good accompaniment.

The pour is fairly generous.

The tasting notes inform us that this spends 12 months in oak, and we have a discussion with one of our servers about preferences for oaked vs. non-oaked chards.  “Which do you like?” she asks, and we realize that it depends.  In general, we don’t like the really heavy buttery taste and texture of a heavily oaked chard, but a bit of oakiness is often quite pleasant.  As is this wine.  If you like Long Island chardonnays you should like this one, with its slightly vanilla smell and touch of citrus and tropical fruit taste.  Nice long finish, too.

It could be an aperitif wine, or a dessert wine, or a wine to have with blue cheese and charcuterie, we decide, but it is a bit too sweet to enjoy just by itself.  The tasting notes say to have this with spicy food, a frequent recommendation for sweeter wines, but we feel you’d lose some of the subtlety of this wine if you did.  The aroma is complex, as is the taste.

The tasting notes say this is “like a nice Chianti.”  I don’t think so!  We feel quite misled by the note, which is an issue we take up with Juan, who sheepishly admits they were written for a previous iteration of this blend.  They needed an inexpensive red crowd pleaser for the menu, hence this wine, the only one that has us looking around for a dump bucket.  A blend of merlot, syrah and a “mystery ingredient,” which, after a guessing game, Juan admits is chardonnay (!), this is quite a sweet red.  We compare it to red candy or fruit salad.  Fresh glasses with most tastes, by the way.

We’ve been on a raspberry pie kick at Briermere recently, with raspberry peach last week and raspberry plum this, and the wine smells to us like those pies.   With 18 months in oak, this has some tannins at the end, and is a fairly light red.  I could see it with veal chops.

My husband refrains from singing “Que sera, sera” when we choose this wine, for which I am grateful.  This is our favorite of the day, with delicious aromas of dark fruit and rich tastes of dried plum (a.k.a. prune) and other fruits.  It would go well with pastas and meats, and we decide to buy a bottle.

And the other cab

Our server, having engaged us in various discussions of our choices, asks if we would like to divide our final taste between the steel fermented cab sauv and the oaked one.  Sure, we’re always up for that sort of interesting comparison.  The steel cab has a funky aroma and is very dry and tannic, really rather austere.  The Reserve is interesting and complex, also dry and tannic, with tastes of black raspberry and maybe a few other flavors.  We buy a bottle of that, too.

Reasons to visit:  an intimate space that also has ample room on the porch and outside for groups; the chance to chat with Juan or the very friendly and knowledgeable servers; the Pinot Gris, the Syrah, and the Cabernet Sauvignon Reserve; reasonably priced wines for Long Island.  While we were there, the owner of CJ’s American Grill came in and we noted that we like their wine policy, which is to feature local wines at a moderate price.  Oh, and yes, the wines are outgoing and friendly and easy to like.

We liked the syrah. 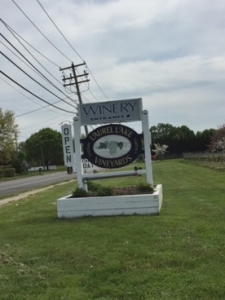