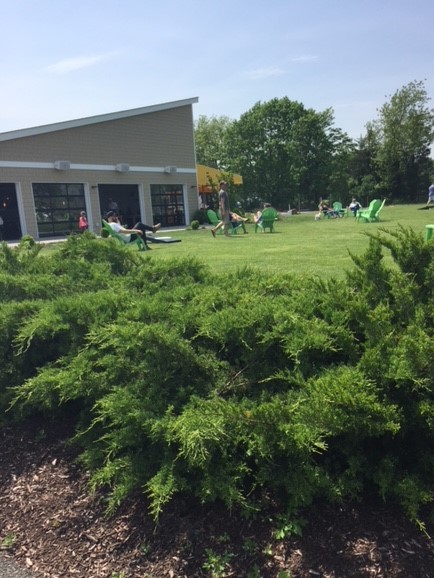 One view of the tasting room and lawn.

“Well, we’ll just have to come back,” we decided, after sharing one tasting of Greenport Harbor beers left us feeling we’d had enough for one day.  It was finally warm enough to feel that beer should be the drink of choice, so we headed to Greenport Harbor’s large facility on the corner of Peconic Lane and Main Road.  They also have a smaller tasting room in the village of Greenport.

Two views of the bar tasting room. Note pooch. They are allowed in this room and outside, but not in the restaurant.

This place is quite large, though it does fill up on summer weekends, with two rooms.  The first one is for ordering beer and tastings, with a side area of GH-related gifts, and the second one is a restaurant area, where dogs are not allowed.  So if you want to get food, be sure you have someone to hang onto your pooch either in the first room or outside while you do so.

The restaurant room is also roomy.

The counter where you order food, plus the beers they have at that spot.

You may remember that I noted one could do a walking/drinking tour on Peconic Lane, and end up at GH.  There, you can spend some time sitting outside in the Adirondack chairs or at a picnic table and have lunch.  They have quite an extensive menu of snacks and real food, from the Űber Pretzel for $11.50 to salads, sandwiches, and a lobster roll for $25.  You order at the counter and they give you a square object which vibrates quite violently when your food is ready to be picked up.  We got the Űber Pretzel, which was quite large, very hot, and came with mustard and a warm cheese dipping sauce.  Not bad, but it lacked the yeasty bite of a New York City street pretzel.  Too soft and sweet for me—but we devoured it anyway.

You also order your beer at a counter, where you can get a tasting of five beers for $12 or glasses or growler fills for varying prices.  The tasting comes in pretty little bell-shaped glasses which fit into a whale-shaped carrier (GH used to sell you the glass, which you then filled with your choice of beers.  We have quite a collection.).  You leave your credit card with the server, who returns it and charges your account when you return the glasses.  Clever.  We saw quite a few people carrying their tasting outside or to a table over on the restaurant side of the place.  We also saw many people just getting glasses of beer and sitting and sipping.  Kids were throwing a Frisbee around outside.

The rather extensive beer menu.

We stood at the bar and studied the beer menu, which consists of fifteen choices divided into three categories:  Year Round, Limited Release, and The OG (Original Greenport) Series.  Within these categories there are various styles, including lagers, ales, IPAs, stouts, bocks, and a Berliner Weisse.  How to choose?  The server gave us a slip of paper and a pen, and told us to write down our choices.  So we did, going for a variety of styles, writing them down in the order in which we happened to choose them.  (By the way, you can also buy their beers in cans and bottles, often available at local grocery stores and beer distributors.) 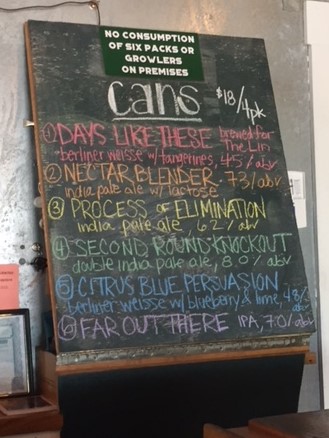 Beers available in cans, but note, no consumption of the cans or growlers while you’re there.

Then she carefully filled the glasses in the order in which we had written them, and returned our slip of paper with instructions to drink them “from head to tail of the whale.”  Wait a second.  We had started by choosing a porter, and our last choice was a brown ale.  Surely that was not the order in which one should drink them!?  She was very happy to write down the best sequence, and as we sipped we decided she had been quite right.  So be forewarned—be sure to ask that question.  As in a wine tasting, order matters.  You don’t want to go from a heavy porter to a light lager, or the lager will taste like nothing.  I think one change GH should make is to automatically have servers point that out.

Our list, with her added re-numbering for the order in which to drink them.

The ABV percentage is something you see next to each beer, and it refers to “alcohol by volume.”  It is listed because beers can vary widely in how alcoholic they are, from, in the case of our choices, 5% to 9.4%.  Tidal Lager is described as a “Vienna Lager,” a particular style of lager you can look up on the web.  This version of it is quite light, though also very tasty, with notes of toast and oatmeal cookies.  This is a good summer beer, nice for sipping on the deck on a hot day.

Our tasting, which was plenty to drink for the two of us.

We asked our server about this one, as we were contemplating what to choose, and she launched into a mini-essay on how good it is and how much she likes it.  I can see why.  I described it as a “classic good beer,” full-bodied but not heavy.  My husband said it was “toasty and creamy.”  It has a touch of sweetness, and would go great with spicy grilled sausages (maybe some of the sausages from 8 Hands Farm).

If you like a really hoppy, grapefruity IPA, this is the beer for you.  We don’t.  It tastes more like a breakfast juice than a beer, and smells like grapefruit juice, too.  And I think it’s a bit dangerous, because you could easily guzzle it down—and look at the ABV!

There are some interesting non-alcoholic drinks available as well.

It was easy to decide to taste this one, since it is one of our favorites.  We’ve bought it in bottles from our local supermarket but, no surprise, it tastes better fresh on tap.  This is a lovely dark beer, with tastes of coffee and chocolate.  As we sipped, we reminisced about our favorite pubs in England and Ireland.  It would go great with shepherd’s pie or a nice lamb stew (hold the mushy peas).

I had to try this one, since it is made with NoFoRoCo (North Fork Roasting Company) coffee.  And yes, it smells and tastes like coffee, like a good espresso with just a touch of sugar. However, I don’t think I would enjoy a whole glass of this. It barely seems like a beer.  Between this and Hopnami, you could have quite the boozy breakfast. 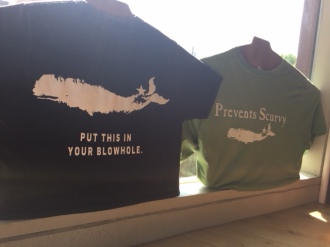 Reasons to visit:  good beer in an expansive setting; nice menu of sandwiches, etc., which, they boast, are often made with local ingredients; the Tidal Lager, Maibock, and Black Duck Perter; generous pour for a tasting; you can fill your growler and take some home; live music sometimes; fun t-shirts.  We’ll be back to try some more.  I calculate we need to come at least two more times to try all fifteen! 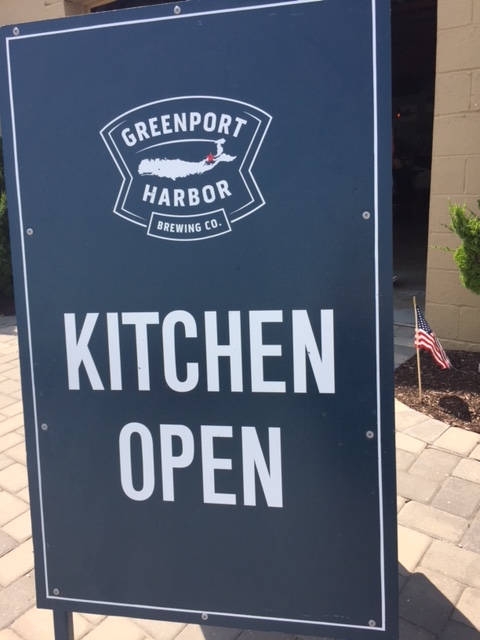 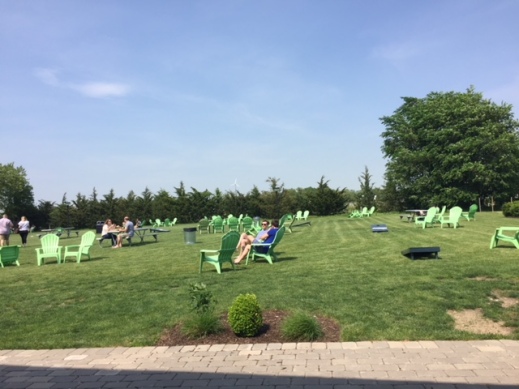 Another view of the expansive lawn 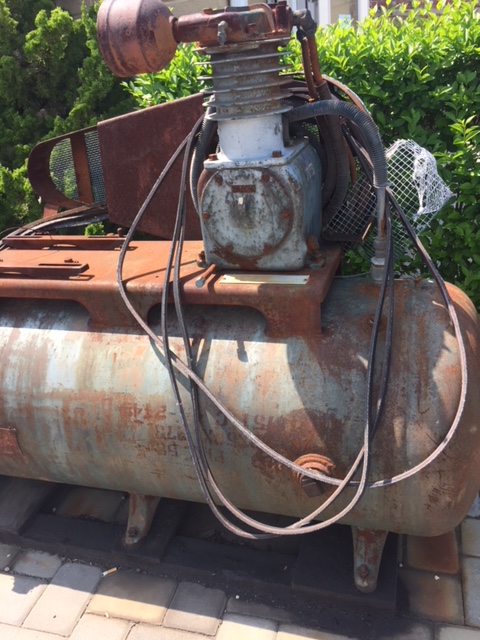 This was sitting by the entrance. I assume it is some piece of “antique” brewing equipment, which fits with the North Fork aesthetic of old farm equipment as lawn ornaments.