If you see this sign out on the sidewalk on Love Lane, the Roanoke tasting room is open. 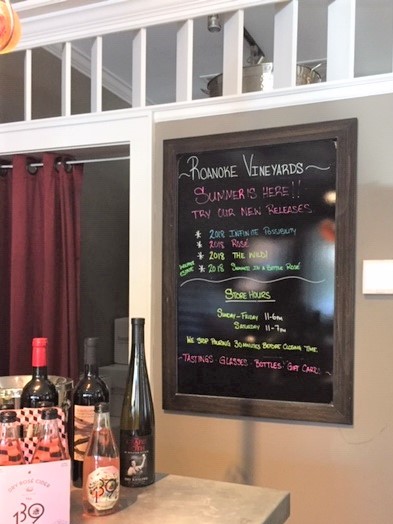 The full title is “Roanoke Vineyards Love Lane Wine Shop,” because this is not their main space.  That is located in Roanoke, on Sound Avenue, and is only open to wine club members.  However, the Love Lane location is open to all, and functions as both a tasting room and a place to buy wine from several wineries, including Wölffer Estates and Channing Daughters.

While we were there, someone came in wanting to buy a bottle of sparkling wine, which they did not have, so we told her about Vintage, the excellent wine store on Main Road in Mattituck. 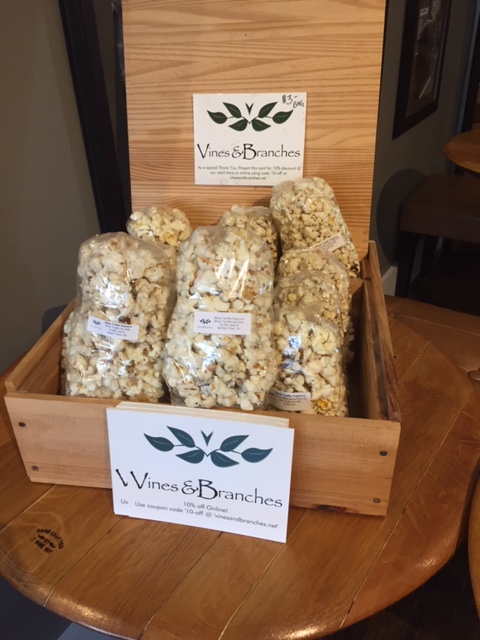 Whenever we go to Vines & Branches, I scoop up a free sample of their delicious truffled popcorn. Now I know how it gets to Roanoke.

Then a wine club member came in and walked out with a case of wine, and another wine club member, who turned out to be the owner of one of our favorite stores in Greenport, Vines & Branches, came in to deliver some bags of her truffled popcorn and stayed for a glass of wine and a chat with the server and us.  Meanwhile, we were the only ones there doing a tasting, which consisted of four rather small pours for $14. 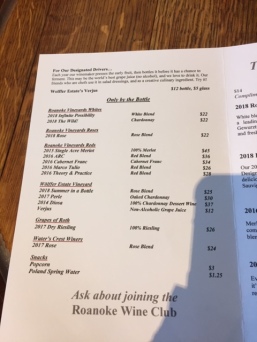 The tasting room is small but comfy, with some nice upholstered chairs around a table, a couple of seats at the bar, four other tables, and a pleasant patio in the back.  We opted to stay inside, in the air conditioning, though last year, when we came with friends, we enjoyed our tasting on the patio.  Love Lane is a great destination for foodies, containing on its short block two restaurants, plus Lombardi’s Italian Market and the Love Lane Cheese Shop. Just around the northern corner there’s Agora, a Greek food shop, and GoodFood, a great empanada spot, and, around the other corner, the North Fork Donut Shop.  And this is our neighborhood! 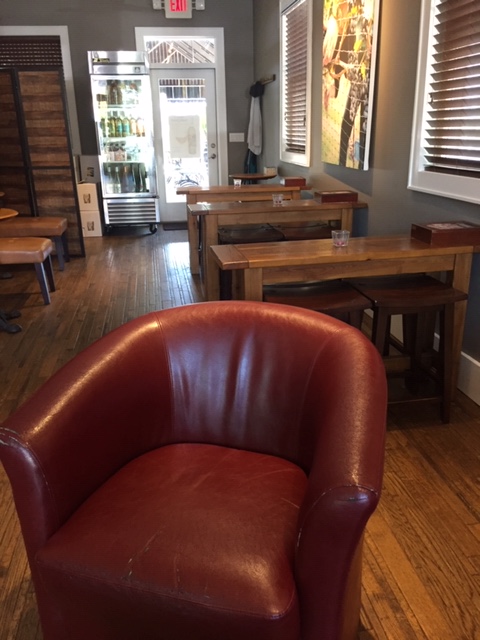 Small pour, especially since we were sharing the tasting.

A blend of 70% chardonnay, 23% sauvignon blanc, and 2% gewürztraminer, this wine smells lovely, of honeysuckle and minerals.  The taste is more interesting than your usual white, reminding me of gooseberries, with some minerality.  It is tart, but has a sweet finish.  I could see having it with a seafood in cream sauce.  Lobster Newburg? 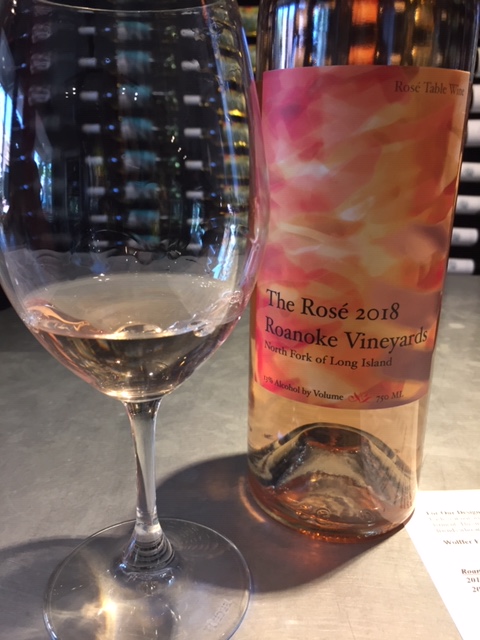 I liked their labels. The rose is quite light.

From being a rarity to being a variety almost every winery needs to have, rosés have come a long way from the days of Mateus in a ceramic bottle.  The menu describes this as a “Provence style” wine, a mixture of cabernet sauvignon and merlot, with “a splash of chardonnay.”  The server explains that it spends only a few hours on the skins, which is why it is such a pale pink.  The aroma is faint, with only a trace of strawberry.  My tasting buddy insists it is sweet, but I contend that it is juicy.  We agree it is a light rosé, and ends with tastes of minerals and salt.  Though we like it, we still prefer Croteaux (which, we recently learned, has been bought by the new owners of Shinn, so we look forward to sitting in their delightful garden again).

If you look at the tasting menu, you’ll see that this should have been the Marco Tulio, a blend that is primarily merlot, but, as our server explained with a bit of chagrin, she accidentally opened the Cab Franc, so that is what we get to taste.  She also explained the name.  Roanoke only has about seven acres of vines on their own land, getting the rest of their grapes from vines they tend at various other vineyards, including some of the Mudd plots.  So wines made from grapes grown exclusively on their estate are labeled “Site Specific.”  Her mistake is our pleasure.  This wine smells so fruity that, if I were a fruit fly, I would happily drown in it.  It also tastes quite good.  My husband describes it as “meaty.”  I think he means hearty.

Of course, I have to ask the meaning of this name.  She explains that the first time they made this wine it was 50/50 cabernet franc and petit verdot, an unusual blend, so they decided to name it after the process of making it—theory followed by practice.  The current iteration is a more traditional blend, of merlot and cabernet franc plus 5% petit verdot.  It has a lovely aroma, mostly of cherries from the merlot, plus other fruits.  My husband notes that the “aroma is more inviting than the taste,” since it is not as luscious as one would expect.  We get dark fruits, mineral, and tobacco.  “It would be good with bacon,” says my husband.  “You mean spaghetti carbonara?”  I ask.  “Sure,” he replies. 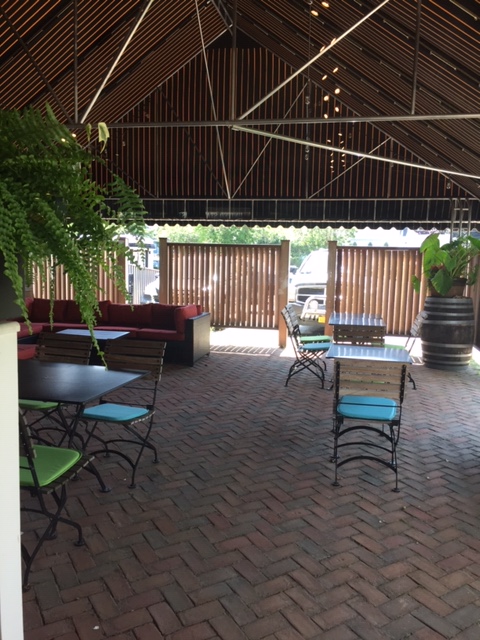 It was just a bit too warm to sit outside, though the patio is nicely shaded.

Reasons to visit:  convenient location in the midst of the Love Lane foodie paradise; they carry some South Fork wines; nice little tasting room and pleasant back patio; the Infinite Possibility and the Cabernet Franc, though all the wines were pleasant. 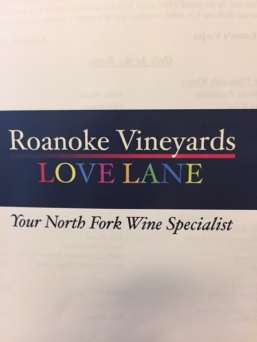 We decided to celebrate Groundhog Day with a visit to the South Fork, especially since such a trip is easy in the winter, when we don’t have to contend with the traffic on Route 27.  We started with a visit to the new Parrish Art Museum in Water Mill.  Designed to be reminiscent of a typical Long Island potato barn, it is a long one-story building, with a soaring roof and multiple skylights, letting in plenty of sunlight on this cold but bright day.

We particularly enjoyed a gallery devoted to William Merritt Chase and his lovely paintings of Long Island scenes as well as his classic portraits.  Another room full of Fairfield Porter paintings was also interesting.  We then headed to our favorite winery, Channing Daughters.  I did write about a visit there last summer, but then we only concentrated on their roses.  This time we decided to do a standard tasting.

Channing Daughters is located on Scuttlehole Road, a charmingly rural road just outside of Sag Harbor (which we used to call the un-Hampton, though it is getting more and more Hamptonized).  Down a pebbled driveway one comes to the small cozy tasting room, which looks out one side to the vineyard and the other into the cellar, where one can see the huge vats of future wine.  The owner of the winery, Walter Channing, named it for his four daughters.  He also has decorated the tasting room and the grounds with his wood sculptures, many of them made from whole trees, with the roots on top, carved into various shapes.  Here’s one from the parking lot: 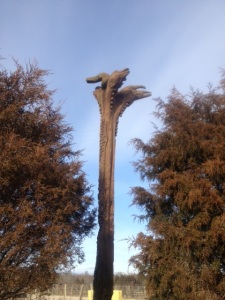 On this cold winter day, there were only a few small groups in the tasting room.  The very well-informed servers noted that they do not allow bus-loads!  The standard tasting that day included six wines for $10.  As wine club members our tasting was free, and we could have chosen any wines from a list of about 20, but we decided not to.

Sylvanus is named for the legendary Green Man, the Roman equivalent of Pan, the god of woods and fields, and also for the field where this wine’s grapes are grown.  One of the aspects of Channing Daughters we like is their interest in experimentation, and for this wine they used all grapes grown in one field, for a blend of 60% muscot, 30% pinot grigio, and 10% pinot bianco.  An aroma of oranges and perfume precedes a nicely dry wine with pleasant fruit and a hint of almond flavor.  I would like this wine better with food, rather than as a sipping wine, and it would pair well with local oysters or other briny seafood.

Fermented almost completely in stainless steel, with only a hint of oak, this lovely wine has an almost honey-like texture with a hint of grapefruit at the end.  I could see sipping this on a nice summer afternoon, perhaps with some tomato crostini.  We also notice that, unlike some places, the wines here are not too cold, and the servers confirm that this is indeed the policy.  We like this because when a wine is too cold you can miss the nuances of its taste.

As a transition from white to red, we sample what is called an “orange” wine, a white pinot grigio fermented on its skins to give it a subtle orange color and interesting complexity.  I detect a faint aroma of orange candy and, not surprising given its 6 months in oak, a taste of oak.  We decide its somewhat unctuous texture does not make it our favorite, though it would pair interestingly with lemon curd or lemon meringue pie (which, my husband notes, he never eats!).

Due uve means two grapes, and that is what this wine contains–syrah and merlot.  Because of Long Island’s climate, you’re never going to get “big hot wines,” says the server, and agrees that this wine exhibits the typical local earthiness which some people “go crazy for” and others dislike.  We like some earthiness, but not when it overwhelms.  This wine has nice fruit–berries–and some hints of black pepper, and just a hint of earth.  It spends 16 months in oak.  I’m thinking it would be good with pasta with a short ribs sauce.

Given that there actually is a sculpture garden on the grounds (ask the server for directions), and that the oldest vineyard (planted in 1982) is named Sculpture Garden, it was perhaps inevitable that one wine would be named this.  Plus the merlot grapes in it come from that vineyard. I could see wandering the sculpture garden on a nice warm day with a glass of this easy-drinking wine in hand, but it’s too cold today!  A blend of 95% merlot and 5% blaufrankisch, this wine has a pleasant berry aroma and cherry tastes, with some earthiness, some pepper, and not a lot of depth.

No, the name is not a misspelling of mud!  This wine’s grapes come from the North Fork vineyard run by Steven Mudd, a well-known vineyard manager who works with a number of wineries.  Terrific wine!  This is a Bordeaux blend of 60% merlot, 21% syrah, 9% dornfelder, 5% cabernet franc and 5% blaufrankisch with an aroma reminiscent of a pine forest, and lots of black fruits and plum flavors.  Definitely yummy, and would be good with roasted lamb shanks, as its dryness would cut the fat of the lamb while it has enough fruit not to be overwhelmed.

Extra!  Because he has it out, the server asks if we would like to try the Over and Over.  We would.

It is hard to explain the method used to make this wine, so perhaps the best I can do is refer you to Channning Daughters own web site, where it is explained in detail, but basically this is made using the “solera” method, where some wine from various years is combined with wine from other years and then fermented together.  We had tried one iteration (probably 3 or 4, muses the server) we did not care for, but this one is definitely a success, with blackberry flavors and aromas.  Nice.

Reasons to visit:  One of best wineries on Long Island, with lots of interesting experiments.  In addition to the above listed wines, I also love their L’Enfant Sauvage, made with wild yeast, their Scuttlehole Chardonnay, which is basically our “house” white, and their Research Cab, a good red.