Until recently, Martha Clara Vineyards, named for the matriarch of the family, was owned by the Entenmanns.  Now it has been sold to the Rivero-González family, so changes will be coming.  A year from now the wines could be quite different, because right now the wines have been overseen by the Entenmanns’ winemaker, but the next vintage will be the product of a new one.  Our chatty and knowledgeable server is hopeful that the changes will all be good.  Meanwhile, the tasting room already looks different, with most of the décor stripped away, and the shop objects also seems to have been winnowed down, with many fewer items for sale.  Should be interesting to come back next year.

One side of the frequently bustling tasting room.

The other room for tastings, where they used to serve food.

On this warm November day, the tasting room was practically empty, with only a few people stopping by, some to pick up wine club packages and others to do a tasting.  During the summer Martha Clara can be mobbed, so it was nice to taste in a quiet setting.  It’s not that I don’t like people—I’m just not fond of crowds.

The menu offers three options, the Aromatic tasting, of four whites for $15; the Northville tasting, of four reds for $15; and the Vintner’s Reserve, of two whites and two reds from their estate selections, for $17.  We decided to share an Aromatic and then a Northville, thus giving us the greatest variety of tastes.  We weren’t hungry, but there was no menu of food on offer, though the shop has a refrigerated case of cheeses, etc., and packages of crackers and other snacks. 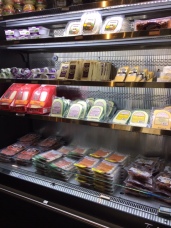 Cheeses in the shop.

various local foods. We like “Dill Death do we Part” from Backyard Brine.

Generally, when a local wine has a name other than a variety of grape, that means it is a blend, and so this is—a blend of chardonnay, sauvignon blanc, pinot grigio, and semillon.  It has a pretty golden color, and an aroma of honeysuckle and tropical fruit.  Though it is slightly sweet, we like it.  The wine is nicely balanced, with some complexity, and flavors of pineapple and minerals.  I think it would be fine to sip on its own, but my husband disagrees.  However, we both think it would go nicely with seafood in a cream sauce.  Hmm…Peconic Bay scallops are in season.

The aroma is metallic and vegetal.  My tasting buddy thinks it smells like his favorite fall vegetable, Brussels sprouts.  Maybe.  The wine is dry, tart, and very light, tasting of lemon peel.  It is so light that if you drank it with food that had lots of flavor it would disappear.  Maybe oysters.

This chardonnay is steel-fermented, like all the other whites in our tasting, and we like it.  I smell slate or rock and gooseberry, and taste citrus and tropical fruit.  It is nicely tart and dry.  We also notice that it is on sale, 30% off if you buy two bottles, so we do.

The steel-fermented chardonnay is currently on sale.

Hang on a second, you might say, I thought all the whites in your tasting were steel fermented, but this one is oaked.  Yes, I say, power of the book.  We get a little side-by-side sample of the oaked chard, courtesy of our server, with whom we have been having a nice chat.  Unfortunately, we don’t care for it.  The aroma is rather funky, with lots of woody smells.  Though it is not too buttery, there is something about the taste I find off-putting.  Cedar?  Pencil shavings?

Our “extra”–a taste of the oaked chardonnay. When you take tasting seriously, servers like to see what you think of various wines.

She warns us that this will be semi-sweet, and she’s right to warn us.  Though it’s very aromatic it is much too sweet for us, and we dump the rest of our taste.  Maybe with Thai food…

Now we switch to the reds, and get a clean glass.  Our server describes this as a bit smoky, and says it goes with red meat.  I’d say this is a roast chicken red, as it is rather thin.  It has a red fruit aroma but the taste is not very fruity.  I get nutmeg and some tannins.  No finish.  By the way, all their wines come in screw top bottles.

51%-49% (sort of like many of the vote percentages in the recent elections), this has the cherry aroma and taste of the merlot, but not much else.  No depth. Dry. We decide this is a burger red.

A blend of merlot, cabernet sauvignon, cabernet franc, and petit verdot, this is, unusually for a red, steel fermented.  I tell our server that I have a catchphrase for her to use with this wine—It’s a white-wine-drinker’s red wine.  It is pleasantly fresh-tasting, with some red plum and cherry flavors, very light.  A ten-minute wine—not to be discussed, just to be drunk.  It is also on sale, but we decide not to get any.

We like this the best of the reds.  It has aromas of spice and red candy.  Dry, with some nice tannins, though it has no depth it has some nice plummy flavors.  I could see having it with lamb chops.

Reasons to visit:  last chance to taste the Martha Clara style wines before the new winemaker takes over; you can bring your dog to the outside tasting area; the Northern Solstice Blanc, the Chardonnay, and the Cabernet Sauvignon; reasonably priced wines.

Lagniappe:  As we were driving home, we passed a movie crew outside the Mattituck Motel, which will be one of the North Fork sites used in the Netflix movie of the Gilgo Beach murders.