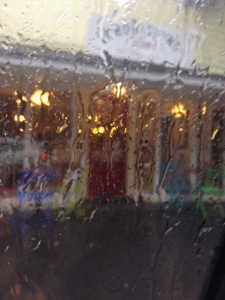 The rain washed out our barbeque, but not our determination to do a wine tasting, so off we set in a tropical downpour to the welcoming environs of The Winemaker Studio.  Odd name for a tasting room, you are probably thinking, especially since it occupies the premises previously called The Tasting Room, a more obvious name.  However, as Anthony Nappa, the proprietor, discussed with us on a previous visit, the idea is to provide a space where a variety of winemakers can showcase their wares, and to also have the space function as an art gallery, with art for purchase on the walls. 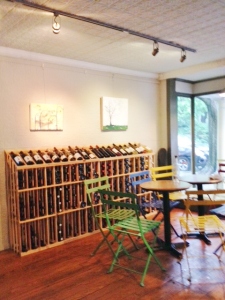 Many of the winemakers carried here are also—or have been—winemakers for larger wineries, such as Raphael or Osprey’s Dominion, but felt they wanted to make wines their own way, under their own label.  Like art, these are labors of love.  As you can tell by the site’s URL, Anthony Nappa makes his own wines, and his selections dominate the tasting menu of fifteen wines, all available for $2 or $3 a taste.  In addition to selling wine by the glass they also feature Greenport Harbor beer on tap and a number of local hard liquors—gin, vodka, whiskey—plus espresso and cappuccino and a menu of sandwiches crafted by Nappa’s wife, Sarah Evans Nappa, a chef who previously worked at the North Fork Table and Inn.  They also run a small store attached to the tasting room called Provisions, which stocks a variety of both local and imported foods, including cheeses, pastas, and charcuterie.  Like many places with their own food, they ask you not to bring your own snacks, but are happy to sell you cheeses, etc. 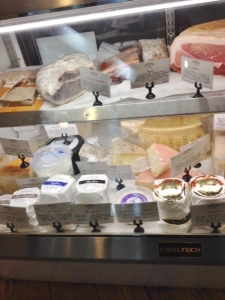 Some of the provisions at Provisions.

The room is small, simple, and rustic, with a wooden bar and small tables with folding chairs both inside and outside.  Sometimes you find a dog or two around, but today they had been left home because the thunder was freaking them out.  Our friends, animal lovers, were disappointed that the dogs were not in residence, but happy about the wines they tasted.  Frequent North Fork visitors, they had not heard of The Winemaker Studio, but will now add it to their list.  We each made a variety of choices from the menu, with each couple sharing one tasting, a good decision since the pour was quite generous.  We were left on our own to decide the order of tastes.  I’ve marked the Anthony Nappa wines with an AN at the end. 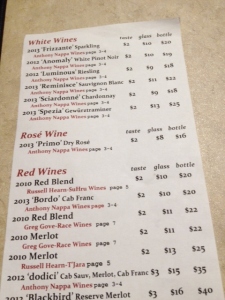 It had been a year since we were here, and there were quite a few new wines, including a sparkling wine made from riesling, pinot noir, and gewürztraminer, and not filtered, so it has an intriguing cloudy look.  We smell and taste lots of minerality, plus unripe pineapple and some lemon.  We envision drinking it on the deck with charcuterie, and our friend suggests using it in a cocktail with Limoncello and some raspberries.  Sounds good!  AN 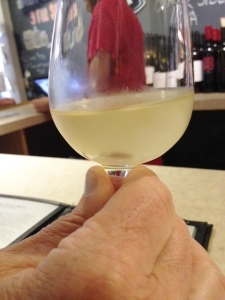 This is their sauvignon blanc, and it spends three days on the skins, giving it lots of complex flavors, including ripe grapefruit.  Good!  AN

Spezia means spicy, a good name for this spicy dry gewürztraminer, with its pleasant honeysuckle aroma.  Though it lacks depth (We prefer One Woman’s gewürztraminer.), it is a good wine.  Pair it with stinky cheeses, they suggest.  AN 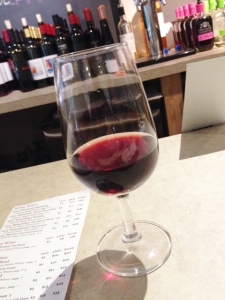 So a year ago we had the 2010 Dieci, which this replaces (brush up on your Italian numbers to decipher the names).  A blend of cabernet sauvignon, merlot, and cabernet franc, this Bordeaux type is another good wine.  Mouthwatering fruit flavors.  AN

Though we are told that this is a wine made only in good years, spending 18 months in the barrel, we are unimpressed.  There’s a touch of that earth smell you sometimes get in North Fork merlots, some dark cherry taste, and not much else.

This is another Bordeaux-type blend, of cabernet sauvignon, cabernet franc, and merlot.  Again, just okay—and fairly oaky, too.

Our friends also tried and really like Nappa’s Anomaly, a white wine made from red grapes, which we have liked in the past, and they enjoyed as well.  They bought a bottle of the Frizzante, perhaps to try that cocktail idea in the near future!  Then we browsed a bit in Provisions, and, though we didn’t find anything we needed for that night, having shopped already, we did make mental notes of things we would buy. 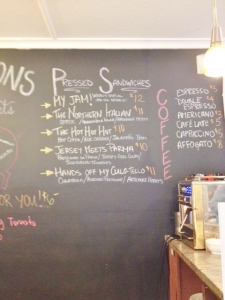 Part of the Provisions menu

Reasons to visit:  a chance to try a variety of wines not readily available elsewhere; the Frizzante, the Dodici, the Reminisce; the opportunity to shop at Provisions; art on the walls; the availability of other drinks and food for those who aren’t wine drinkers.  We haven’t tried it, but they have Happy Hour from 5-7 every day, with 30% off on glasses of wine. 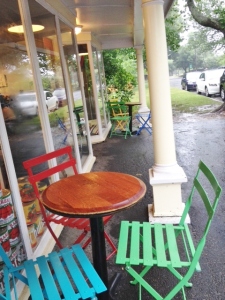 Not a great day for sitting outside…maybe next time!