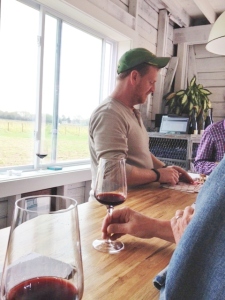 “I like to experiment,” enthused Regan Meader, the owner, with his wife Carey, of Southold Farm + Cellar, one of the newest wineries on the North Fork, and a very promising one.  Mr. Meader went on to discuss the fun and the intellectual challenges inherent in wine making.  He came to the North Fork a number of years ago knowing very little about wine making, and apprenticed himself to a couple of wine makers. He has learned his lessons well.

Southold Farm + Cellar is a bit off the beaten track, and so are its wines.  When you turn in off the back road, you find a lovingly restored rustic tasting shed (open only on weekends) with a view across the field to the vines.  The vines are still too young to make wine, so “The birds get to eat most of the grapes.”  (Though his one year old daughter also gets some.) Until next year, he’s sourcing his grapes and wine from other vineyards on the North Fork, then developing his wines in his own way.  He intends to be an organic farm and to use all natural fermentation.

The tasting menu, written on a blackboard, features four wines for $15, poured into very attractive glasses.

The tasting starts with a lovely sparkling wine with an interesting back story.  Peconic Winery closed last year, but they still had some wine, including this one, which had not yet been disgorged.  So Mr. Meader bought it and disgorged it “with no dosage.”  Alas, he had no bottles available, or we would have bought one—or two.  A delicious aroma like yeast bread baking presaged a toasty caramel taste we really enjoyed.  Made from pinot noir grapes.

Made from a musque clone from Mudd’s vineyard, this is not your average Long Island chardonnay.  Though it spent some time in oak, there is only a trace of oak in the flavor.  The aroma is lightly lemony, and because the wine is not filtered it is a bit cloudy, with an almost viscous texture.  We also liked this wine, with its touch of lemon but also tropical fruit.  As we were discussing what it would go well with, Mr. Meader suggested duck breast pastrami!  He also, in the tasting notes, suggested one of my favorite cheeses, Humboldt Fog, a California goat cheese, as an accompaniment.  Oh, and the name references those who would dismiss chardonnay.

Okay, I had to know—who named these wines?  Blushing faintly, Mr. Meader admitted he did.  I told him he was a poet.   This wine is described as an “ode to dry Lambrusco.”  A blend of merlot, petit verdot, and pinot noir, this is a slightly frizzante light red.  He recommends having it lightly chilled in the summer as an alternative to rosé.  I have to say this was not my favorite of the afternoon, though many would probably enjoy its tart strawberry flavor.

Love those names.  This is his 2013 cabernet franc and is made from certified organic grapes.  He fermented whole clusters for less than seven months in extra large oak casks.  Why large casks?  You get some oak taste, but less than with regular casks.  Sweet aroma.  Super dark color.  Delicious taste.  Lots of dark fruit.  No dirt taste!  Yum.

Yes, there were four wines in the tasting, but Mr. Meader adds in one more (which he also gave to a group of young women who were here before us).  This is a wine that is not quite ready to drink, but he’s pretty excited about it and wants to share.  He told us this blend of cabernet franc, malbec, and merlot was an “ode to Rex Farr,” whose organic farm in Calverton supplies the grapes.  The aroma is brambly blackberry, but the taste is very closed in, with some nice tannins.  Even as we were discussing the wine, the taste in the glass improved.  Given time, it should be quite good.

Reasons to visit:  you want to get off the beaten track and try something new; Mr. Meader and his enthusiasm for his wines; La Belle Fille, The Devil’s Advocate, Cast Your Fate to the Wind.  We can’t wait to see what Regan Meader does next year when he gets to harvest his own grapes!