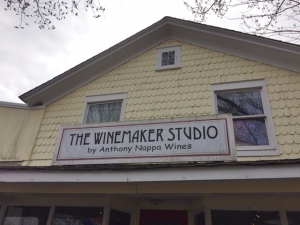 “We’re going to Nappa’s tasting room,” I said to our guests, who, having recently returned from a tour of California’s wine country, wondered why we weren’t heading to JFK rather than further east.  I clarified, “N-a-p-p-a; it’s his name.”  Ah.  We further explained that although Anthony Nappa owns and operates The Winemaker Studio, it earns its name as a studio because it is a showcase for a variety of wines produced in small quantities under their own labels or names by winemakers who also work for larger vineyards.  Just as an artist may do commercial work but also produce his or her own creations, these winemakers have the artistic freedom to experiment and express their own ideas about wine production.  A good example of this is Nappa’s Anomaly, about which more in a moment.

We were particularly interested in visiting this tasting room because we had just read an interesting article about one of their wines in the most recent issue of Wine Press magazine.

The menu varies from time to time, and today’s menu offered a choice between four of Nappa’s wines for $12 or five of Russell Hearn’s wines for $12.  We also could have opted for a local beer on tap or coffee, and the Provisions shop connected to the tasting room offers a variety of sandwiches and other edibles.  However, having just had a delicious and very satisfying brunch/lunch at A Mano in Mattituck, we were happy just to taste some wines.  In order to facilitate our conversations about the wines, we decided that each couple would share one tasting of the Nappa wines, choosing four out of the menu of six varieties.  Both couples opted to skip the riesling, made from Upstate grapes, when the server informed us that it was on the somewhat sweet side.    Our server, by the way, was very informative and friendly, and we had some nice chats with him about wine. 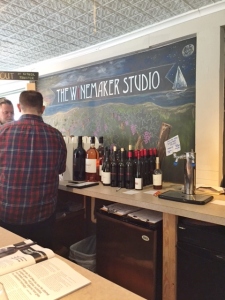 Our server did a great job.

Anomaly is a good illustration of what happens when a winemaker decides to experiment.  It is a white-ish wine made from red pinot noir grapes, and each time I’ve had it it has been different.  A couple of years ago it was a very light pink and I liked it very much.  The last time it was definitely white, though a somewhat darker yellow than many whites, and I didn’t care for it.  This year it was almost orange, and we all liked it!  The aroma included peach and spice, and we tasted citrus and boysenberry with nice tartness and acidity, with still some fruit on the finish.  As we speculated on what it would go with, we decided it would make a nice aperitif.  One friend speculated that it would go well with “odds and ends from the refrigerator.”  Hers must be well stocked, as she began to muse on eggplant dip and bits of charcuterie.  Or with a salade niçoise, she continued, and it would make terrific vinegar.  They bought a bottle. 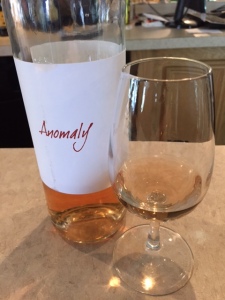 Because it is made from chardonnay grapes, steel fermented but allowed to go through malolactic fermentation, this wine can be drunk on its own, as it is less tartly citrusy than other chards.  It would be great, we agree, with lobster, or with mussels cooked with bacon or sausage.  We are still full from lunch, but I guess food is on our minds.  Before we move on to the reds, we’d like some water, but before our friend can pull a bottle from her bag our observant server offers us all glasses of chilled water.  Many H2O jokes ensue.  One can drink it chilled or at room temperature; recent vintage; crisp and light; no residual alcohol.  I’ll spare you the rest… 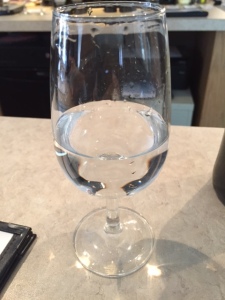 We were particularly curious to try this wine since it was featured in an article in Wine Press magazine, a very useful free publication you can pick up at many restaurants and wineries on the North Fork.  You would think from the name that this is a Bordeaux-style wine, but “bordo” is in fact the Italian name for cabernet franc (which is an ingredient in Bordeaux wines).  We sniffed and noted an aroma of cherry, but also something metallic.  “Burnished copper,” said my husband; “Like a wet penny,” opined one guest.  The taste was somewhat peppery, a touch earthy, with some cherry, and rather light.  You could drink it with cheese or pizza, but it is not a wine you would want to sip by itself. 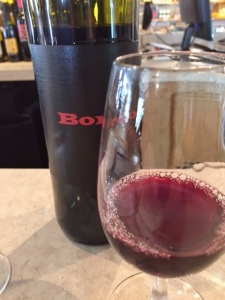 At this point we diverged for our last tastes.  We opted for La Strega, partly because I wondered why name a wine “the witch.”  “Malbec is not the easiest grape to work with,” chuckled our server.  If you are expecting a big bold Argentinian malbec, this is not the wine for you.  It is steel fermented, said the server, with a perfume-y smell, with perhaps a whiff of oatmeal, and is much lighter than most malbecs.  Rather crisp and delicate, it is not our favorite. 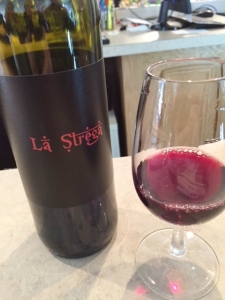 Meanwhile, our friends opted for the Bordeaux blend, of 67% merlot, 18% cabernet sauvignon, and 15% cabernet franc.  This is another dry wine, with not a ton of fruit, with tastes of fig and tobacco.  It is aged 18 months in oak.  We sense something green about it, perhaps a bit of a taste of asparagus. Our friends think it would pair well with paella, with its blend of seafood and sausage and strong flavors. 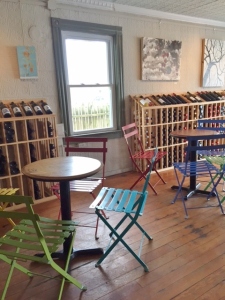 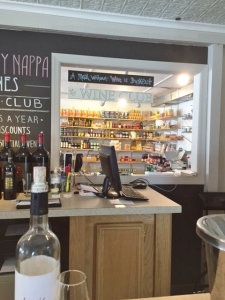 You can see the next door food shop through this window.

Reasons to visit:  The chance to taste some offbeat wines off the beaten track; a cute tasting room with colorful folding chairs; one can buy sandwiches, etc., next door, so they do ask you not to bring your own food; the Anomaly and the Sciardonné.  We haven’t tried it, but they do a happy hour from 4-7 on weekends, which might be fun. 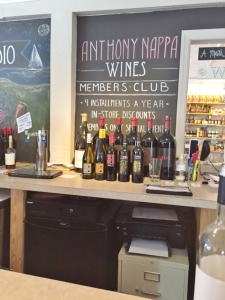