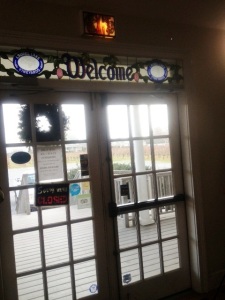 In the winter, the North Fork is even more laid back than in the summer.  (In fact, the only intense season is October, when the pumpkin-pickers and maze-wanderers coincide with the harvest-season wine-tasters to actually cause traffic on Main Road and Sound Avenue.)  However, the wineries are still open, though for some only on the weekends; most of the restaurants are still open, though some close for the season; and a few farm stands are still open, featuring Brussels sprouts and winter squash.  On an unseasonably warm December afternoon, with fog shrouding the vineyards, we decided to head to Laurel Lake Vineyards, on Main Road near Laurel Lake Park.

The tasting room is housed in a pretty building that looks like an old-fashioned Colonial farm house, with a wide veranda and stained glass windows. On one side of the veranda there is a large seating area, screened at this time of year by plastic sheeting from the elements.  Inside, the tasting bar is attractively designed to look like a saloon bar, with a large mirror behind it. They have a small selection of wine-related gifts—t-shirts, stoppers, etc.—and some local art for sale.

The tasting menu is divided into whites and reds, and a standard tasting is any three for $7, with a fairly generous pour (plus the usual wines by the glass or bottle).  Since there are eight reds and nine whites to choose from, we will have to return!  Unfortunately, I was suffering from a sore throat (but not yet the stuffy nose that arrived the next morning, thank goodness) so we opted not to share, and I took three reds and my husband took three whites.  The server was candid in his recommendations on which to choose, and I liked his choices for the reds.

A pleasant grassy aroma forecasts a clean grapefruit-y taste, with some sweet notes, almost as if it had been in oak, though it is a steel-fermented wine.  This would be good with seafood or for sipping.

He finds this one too sweet, so much so that it is not a good capture of the varietal.  Rather than fruit, it tastes more like honey, so I suppose this could function as a dessert wine.  We also note that the whites are being held in a wine refrigerator set at 44 degrees, which seems a bit too cold to us. We mention this to the server, who laughs and notes that some people actually ask them for ice to put in the wine, which they do not have.  “Room temperature” in the past meant chillier than room temperature now, but we find we prefer our wines warmer than they are often served.

This one is also sweet, but “not unbearably so,” and would be good with spicy food.  Though it starts sweet with some buttery notes it ends with a bit of a tang.

So there is a school of thought that sees the “reserve” moniker as a bit of a scam, but I’m willing to allow it!  Though there’s not much aroma to this wine, it has a nice dry berry taste.  It’s good, though a bit thin on the finish.

I really like this one!  There’s some eucalyptus aroma, and red berry tastes, with what their tasting notes call a “smooth velvety finish.”  They also say it’s good with steak, and I agree.  Buyable!

This, as my grandma said with each new grandchild and then great-grandchild, “beats the bunch.”  There’s lots of fruit on the nose, with yummy blackberry and some green pepper tastes.  Since it is not as heavy as some Australian syrahs, I could see this as cutting the fattiness of a lamb dinner.  They also suggest having it with pastas and smoked ham. This is a slightly unusual grape for Long Island, but I happen to like syrahs (and shirazes) in general. Very buyable, and we do, buying one of this and one of the cab franc.

We have heard that some of the owners and winemakers are Chilean, and wonder if this explains the sweetness of the whites.  The tasting menu also includes a list of restaurants where you can find their wines, and I can see why a number of places would feature these pleasant, well-priced wines.