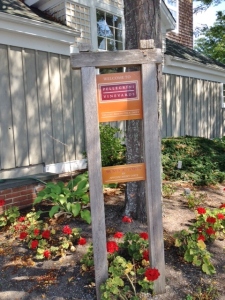 Going with a group?  Have kids in tow?  Want to sit quietly at a table and ponder your tasting?  Like whites?  Like reds?  Pellegrini is good for all these conditions! On this visit we saw a large bachelorette party enjoying their tasting in the tented courtyard, a couple—he wearing a t-shirt that said Brooklyn—at a table under the pergola, and a family with kids who ran around on the lawn, among others. 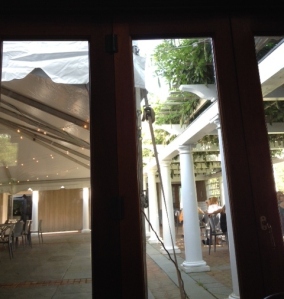 A view to the courtyard and pergola

Their tasting menu offers several different options, including a flight they bring to your table of three two-ounce pours of wines of your choice from a menu of 12, plus a complimentary one-ounce taste of their merlot, for $12, or a tasting of their Vintner’s Pride wines for $14.  Tastings include a packet of oyster crackers to clear the palate.  When you get your tray of tastes, sample them from left to right and top to bottom, as they are arranged on a labeled placemat.  If you’re not sure in which order to taste (order matters, as a delicate wine will be lost if you taste it after a more forceful one), ask your server.  They also offer a cheese plate or a chocolate and wine pairing, but they don’t seem to mind if you bring your own snacks.  All wines are made from grapes grown on their estate. We belong to their wine club, so our tastings are free.  We got two tastings, one of their whites and the other of the reds, and shared. 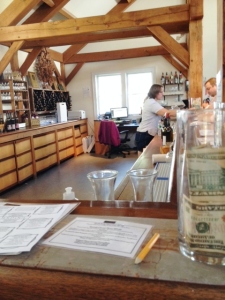 This is a steel-fermented blend of merlot, cabernet sauvignon, and cabernet franc with a pleasantly herbal—rosemary?—aroma.  We decided we would like it as an accompaniment to fish, as it is nice and dry with lemony tastes, but it is not a sipper.  If you want some, go now, as it is on an end-of-season sale of three bottles for $33 (we bought three).  Not as good as Croteaux 314, however. 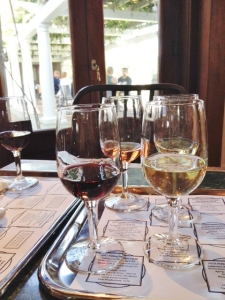 The tray of whites and rose, plus the merlot.

We’ve been on a bit of a gewürzt kick lately, for no real reason, so we can compare this to others of its ilk. We find it a bit too sweet for us, though the finish is rather tart.  Still, it’s a pleasant wine, with aromas of honeysuckle and tangerine, and would make a nice aperitif.

A blend (hence the name Medley) of 60% chardonnay and 40% sauvignon blanc, steel-fermented, this wine has mineral and lemon aromas and a refreshing taste—not too tart, not too sweet, with tastes of gooseberry and citrus and mineral.  “Hmmm,” I say, “I think this would pair well with tuna-noodle casserole.  I’m not kidding!”

Merlot is their signature wine, and they make a lot of it.  The 07 is actually a bit of a blend; though it is 90% merlot it also includes 6% cabernet sauvignon, 3% cabernet franc, and 2% petit verdot, giving it some complexity.  This is an easy wine to drink, soft, with tasty blackberry notes. 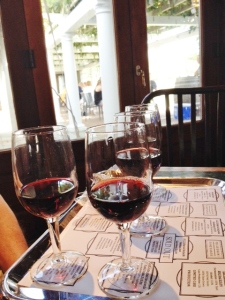 The tray of reds.

I think I’d rather have this with lamb chops than with steak, but that’s just me.  A 50/50 blend of merlot and cabernet sauvignon, this has a bit of that forest smell that merlots sometimes have, and is quite dry, with some tannins.  This and the other reds are all aged in oak.

Yum.  “Good from start to finish,” says my husband, and I agree.  The color is very dark, and we sense lots of ripe fruit aromas and tastes.  This one I would have with a good steak, for sure. 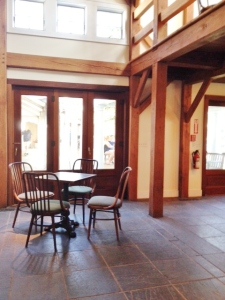 It was very humid outside, so we opted to stay inside in the air conditioning.

A Bordeaux blend—60% merlot, 25% cabernet sauvignon, 15% petit verdot—one would expect this wine to be better than the previous one, but it is not.  We smell spice and dark tea leaves, but are underwhelmed by the taste.  For the price, it is disappointing.  “It never opens up,” says my husband.  Maybe if it sat in the glass longer?  But it is the last of our tastes, so it has been there for a while.  Oh, well. 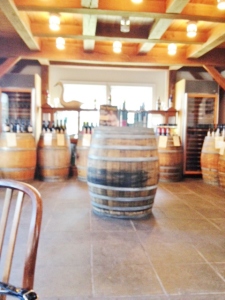 One part of the tasting room. 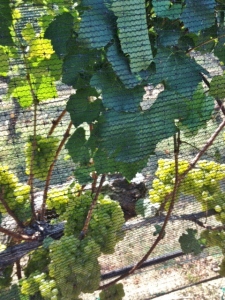