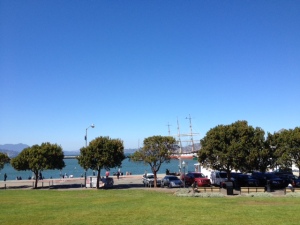 View of San Francisco Bay from near the tasting room 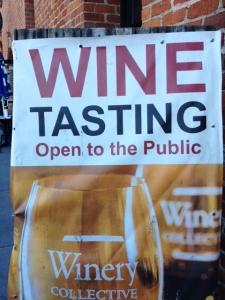 I know, you would think if Nofowineaux went to California she would visit Napa/Sonoma, but this was a very short visit to San Francisco to see an old and dear friend, so time was limited. However, we did get to a tasting room (of course!) in San Francisco for a winery located, surprisingly, IN San Francisco. The Winery Cooperative is located in the Fisherman’s Wharf area, just a little way to the left (as you have your back to the bay) of Ghirardelli Square and near the surprisingly well done little National Park Service museum about the bay and its history. They represent several boutique wineries, but we ended up tasting only the wines from The Winery SF.

The Winery actually has a vineyard located in San Francisco, on an island in the bay called Treasure Island, which was formed primarily from land fill. They also use grapes from Napa, Sonoma, Lake, and Mendocino counties. The tasting menu had a number of options, and we chose to share a tasting of four wines for $15. Some other options were $20. The room itself is fairly small, and is mostly taken up by a long wooden bar with stools. Our server was pleasant and enthusiastic, but couldn’t answer all of our questions about the wines. 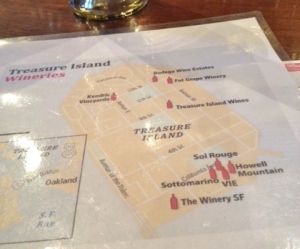 Sunday afternoon we had had fresh briny Hog Island oysters with beers at The Ferry Marketplace, and we decided they would have also gone well with this wine. An aroma of tangerine precedes tastes of citrus and mineral in this rather bright and tart wine with a nice long finish. Their tasting notes characterize it as “Napa and New Zealand Style.” 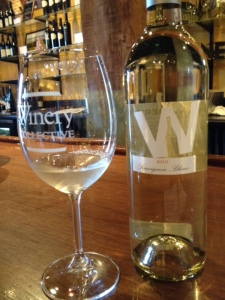 Our server tells us that this spends “some, but not too much” time in oak, so is not as buttery as some California chards. We agree that it is not too buttery (good), but that it is overall just okay, with a taste my husband compares to unripe grapes. Hmmm, a wine that tastes like grapes…We scent some mineral, and some of that vanilla-ish wood smell.

“This wine has everything but the kitchen sink,” our server chuckles. Yes, it does: syrah, zinfandel, mourvedre, cabernet sauvignon, petite syrah, and malbec. The leftovers? Maybe! Given the complexity of the grapes, this is a surprisingly mono-dimensional wine, dry, but with some fruit. The aroma has some chemical notes—cleaning fluid, opines my husband—as well as dark berries. It would be a fine pizza wine, and indeed the brief tasting notes mention what a good value it is twice. The notes also explain the name, “as diverse as the People of San Francisco.” 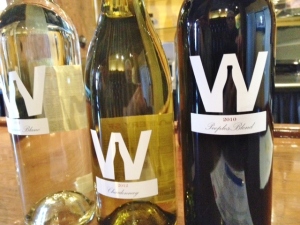 Mmmm, this smells very nice, like plums and cherries. However, the taste is, again, just okay. It is dry with some spice and fruit, but a bit thin. One could drink it with lamb. We ask how long it was aged, and no one seems to know. ”Two years?” guesses one server.

Yes, the tasting was for four wines, but for only $1 we could add a taste of a sparkling wine. Why not? Well, at least the price was right. It starts tingly and nice, then pow! hits you with sugar. Actually pretty bad—if it had been a bigger pour we would have dumped it! 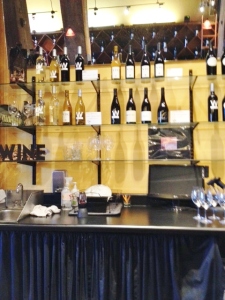 Reasons to visit: you’re in San Francisco and searching for something to occupy a half hour or so in the Fisherman’s Wharf area; you’d like to sit down and rest a bit inside somewhere; the sauvignon blanc. 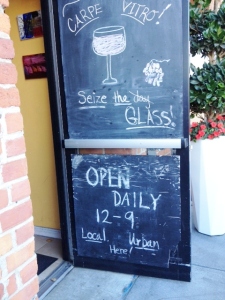