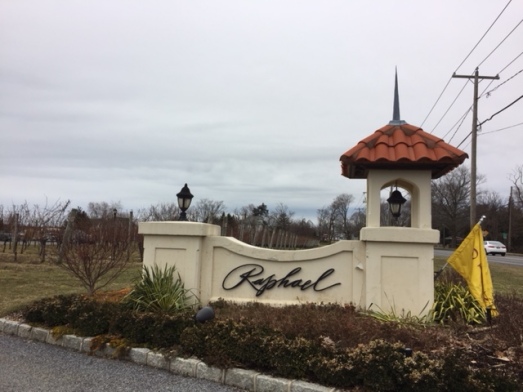 As you drive into the parking lot for Raphael, the Italian roots of the owner are immediately apparent.  The red-tile-roofed building with the fountain in front would not look out of place in Tuscany.  In case you had any doubts, notice the Italian flag flying next to the American flag.  However, the wines are very much Long Island wines. 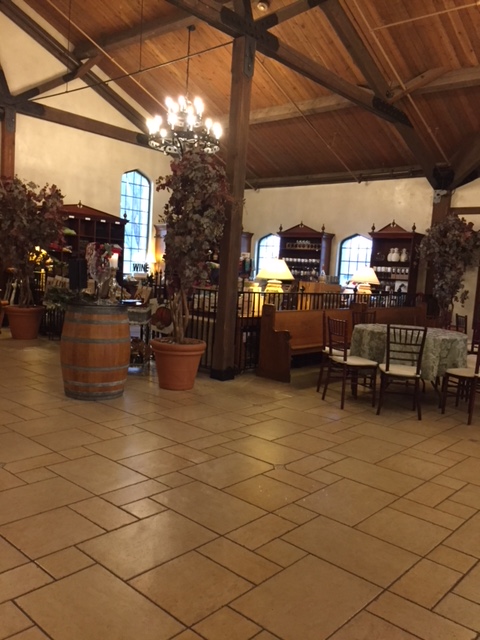 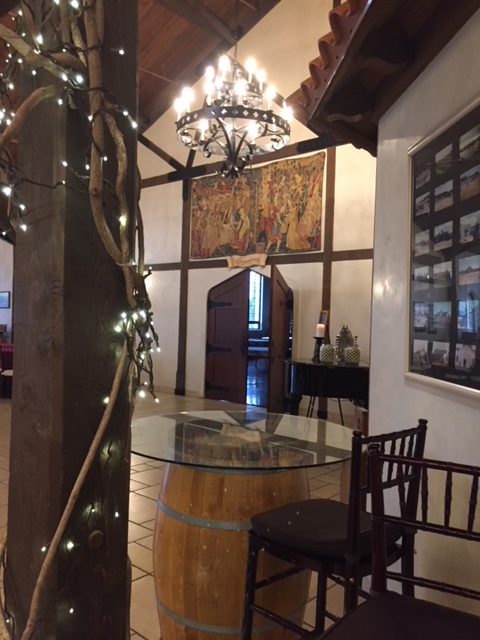 That partly open door leads to a large party room.

The tasting room is quite large, with an equally large party room off to one side, so it is no surprise that we often notice that Raphael is closed for private events. They have a fairly large selection of wine-related gifts.  We walked up to the circular bar in the center and, after ordering our first tasting and a snack, were directed to a nearby table where we could quietly enjoy our tasting.  Raphael does not permit outside foods, but they have a menu of snacks.  We ordered the Grandma Flatbread with house-made mozzarella ($8.95), which was basically pizza, with a red sauce and too much oregano, but functioned to take the edge off our late-afternoon hunger.

The menu offers three tasting options each for whites and reds, all of which offer four tastes.  There is a mixed tasting, an estate white or estate red, and a sweet white, all for $16, or a premium tasting, of whites or reds, for $20.  In general, their wines are pricy for the North Fork, with their least expensive white at $27 and their premium reds costing $72.  However, the menu does point out that quite a few of their premium wines, and a couple of others, have scores of 90 or better from Wine Advocate or Wine Enthusiast, if you are interested in that sort of thing.

We decided to do as we often do, and share two tastings, first of the premium whites and then of the premium reds.  Our server carefully placed our glasses over their listings on the menu, so we could see which was which.  She was quite knowledgeable about the wines, and informed us that when they do wine club events, she is the one who runs them—sets up the tastes and discusses each wine.  She was curious as to our reactions to the wines, having noted my notebook, and we found we agreed on some and disagreed on others.  Interestingly, this was one of the few wineries where my husband and I had fundamental disagreements on a couple of the wines.  As the French say, “Chacun à son goût.”

Interesting aroma.  We agree on pine and citrus peel.  The wine itself is dry and very light, pleasant, but with not much to it.  I taste lime, and my husband insists on pear.  It would be fine with oysters or simply sautéed scallops.

When I ask why “virgin berry,” our server says “because it sounds nice.”  If I had a dump bucket, I would dump this one, as it both smells and tastes like gasoline, or “petrol,” as our server says.  I think they went overboard on making this riesling dry and lemony.  On the other hand, my husband likes it!  We agree we would not, blindfolded, identify this as a riesling, but he thinks it would be good with a dish like shrimp scampi.  “Chacun à son goût.”

This is their oaked chardonnay, half of it aged in new French oak, so I’m not expecting to like it.  However, I do!  It’s not very oaky, though I do smell butterscotch and vanilla. It has lots of fruit flavor and a pleasant finish, though not much depth.  I don’t think it is worth what they’re charging, however.

A blend of 31% sauvignon blanc, 20% semillon, and 49% riesling, aged in both steel and oak, this is my favorite of the four.  It has a lovely floral aroma of orange blossoms.  Again, this is a dry white with some minerality.  Though it is almost half riesling, it does not have the gasoline aroma of the last taste.  All their whites have a similarity of style, which I would characterize as lean, not big.  By the way, our server says the previous year’s riesling was quite different, and she liked it better.  We agree that you have to try wines every year, and can’t rely on what you liked from a previous vintage.

Now my husband thinks he smells petrol.  Nope, I say, macerated berries.  “Chacun à son goût.”  Well, we both like it.  It has tannins which make us think it could still age more, and lots of tastes of really ripe blackberries.  It is 90% petit verdot and 10% merlot, but I don’t get any cherry taste.  Nice long finish.  This would be good with a nice juicy steak.

“I’d be happy to drink this if someone else was paying,” says my husband, and I agree.  The aroma has a touch of forest floor funkiness as well as fruit, and it has lots of dark fruit tastes, though it’s not as big as the petit verdot.  Barbequed butterflied leg of lamb is what I would make if you were bringing me a bottle of this.

The server put these cute labels on the glasses so we could carry them back to our table.

This is another nice but not incredible red, with some good fruit tastes.  It could have more depth, and the finish is rather soft.  Perhaps it needs to age some more.

Finally, we try their not-Bordeaux blend, a mixture of 54% merlot, 27% malbec, 16% petit verdot, 2% cabernet sauvignon, and 1% cabernet franc.  I’m not happy with the aroma, which reminds me of rotten eggs.  My husband agrees that the smell is funky, but not that it’s rotten eggs.  It tastes fine, though it is not complex.  It has some tannins, so it would be good with lamb. 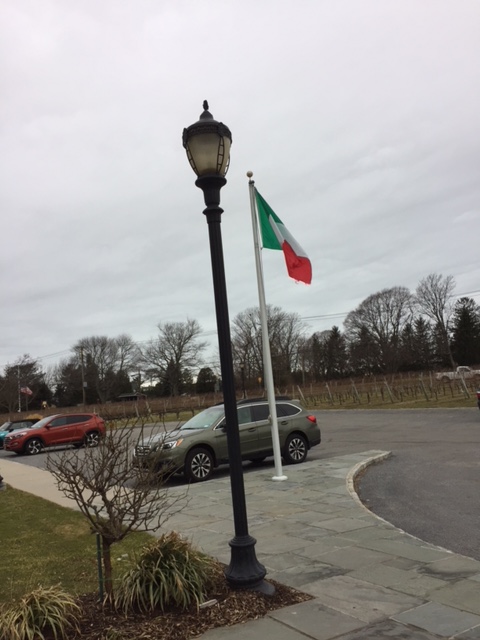 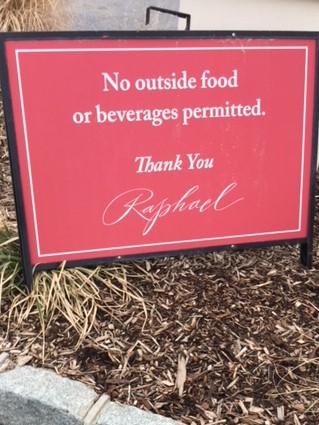