You can glimpse the outdoor seating area off to the side.

When I say old, I’m not kidding.  Borghese took over the oldest vineyard on the North Fork—Hargraves—and is as serious about their wines as the Hargraves were.   Though we have been there when they had music—a French Edith Piaf-type singer—or oysters or art exhibits (like the current one, curated by and featuring local women artists), the emphasis here is definitely on the wines.

The tasting room has a bar along one side, and then wine barrel tables where you can stand and taste.  They also have some outdoor picnic tables, though it was (once again) much too hot to sit outside. 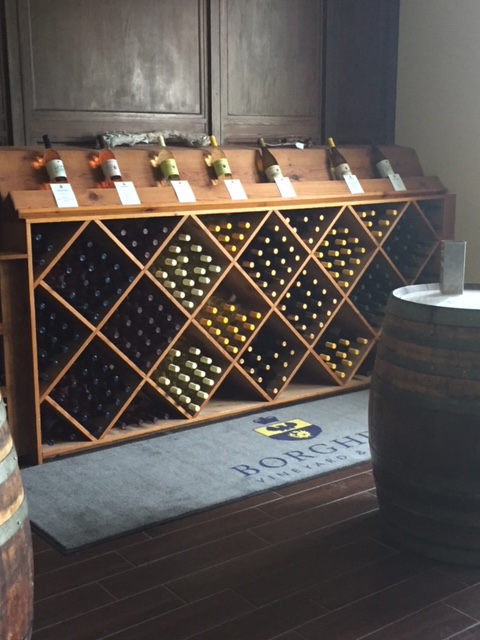 One side of the tasting room.

Though they have several tasting options, for $20 or $15, featuring from five to seven wines, we ended up getting a more or less custom tasting, since we were the only people there and our server appreciated the serious way we went about our sniffing and sipping.  The pour is fairly generous, so sharing seven tastes was plenty for us. 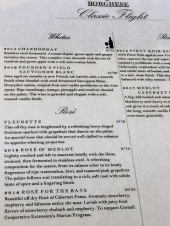 They have a few wine-oriented gift items.

A few of the gift items–or you could buy a work of art from the gallery.

Meritage on the North Fork usually refers to red wines, so we were interested to taste this white blend.  It includes semillon, sauvignon blanc, and chardonnay, and is a dry, citrusy—more lime than lemon—crisp wine.  Our server informed us that the wine originated one year when they had a fair amount of semillon grapes, but not enough to bottle on their own.  The menu notes this is a “limited release,” which means it won’t be made every year or in large quantities.  I decided it is a very summery wine, with a faint aroma of peach.

We got this taste because, as I perused the menu, I noted that I would certainly not taste the barrel fermented chard, as I tend not to like them.  “This one is on me,” insisted the well-informed and chatty retired gentleman who was our server.  “I think you’ll like it because it is not like most oaked chardonnays.  For one thing, it is aged in neutral oak.”  “Neutral” oak barrels are barrels that have been used, so when they are re-used they do not impart as much oakiness to the wine, so you don’t get that buttery taste or unctuous mouth-feel of oaked chards that I dislike.  Well, he wasn’t wrong.  I smelled honey, but the wine itself is not at all sweet or heavy, with tastes of flowers and spice and pineapple.  “It’s unexpectedly good,” I had to admit.  Lesson learned—don’t reject oaked chards without learning more about each one. 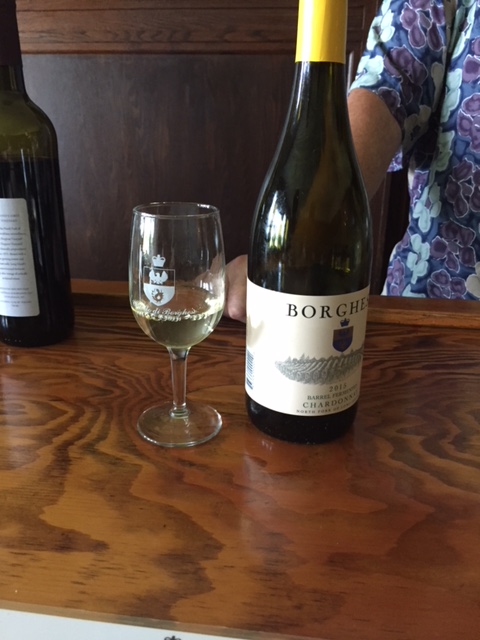 “Ever hear of the saying, when life gives you lemons, make lemonade?” asked our server.  We had.  “Well,” he continued, “this is an example of that.”  In 2016 there was a nor’easter that literally blew the skins off one section of pinot noir grapes (Borghese grows, harvests, and makes all their wines.)  What to do?  This is the result—a white wine with just a tinge of pink and a taste that is more like a red than a white.  The wine smells subtly piney, and tastes like those white cherries that have about a one-week season.  A touch of citrus at the end.  I could see having this with prosciutto and melon.  It is good to be reminded that wineries are basically farms, at the mercy of the whims of nature.

At this point we have put ourselves totally into the able hands of our server, and let him choose our wines.  This, he tells us, is, like most Borghese wines, made in the Old World style, aged in new French oak barrels.  We discuss the observation that the Long Island has terroir has more in common with Europe than with California, which is not surprising when you consider both border the Atlantic Ocean—and were once, eons ago, part of the same continent.  (When the idea of Pangea was advanced, I’m sure I’m not the only person who thought back to that time in elementary school when you looked at a globe and thought about how those curves of the South American eastern coast would fit perfectly into the African western coast.)  Back to the wine, which is quite nice.  We smell forest and plum, and taste blackberry.  Some tannins.  I think it would go with blue cheese, and he suggests lamb chops.  Yup.  Nice finish. 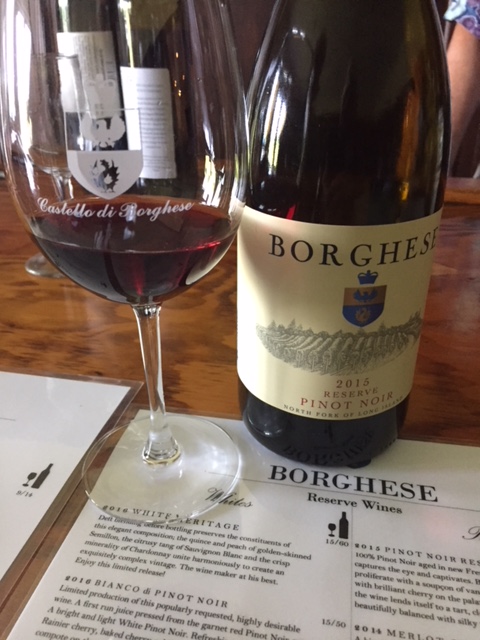 We get a new red-wine-friendly glass with the reds.

A 50/50 blend, this is a good summer red, comparable to a Beaujolais, with no tannins.  The aroma is cherry and tobacco (unsurprisingly), and tastes like cherry, too. Dry.  It would go well with burgers.

This is a good example of a somewhat typical North Fork merlot, with cherry aromas and flavors.  It would go great with pasta Bolognese. 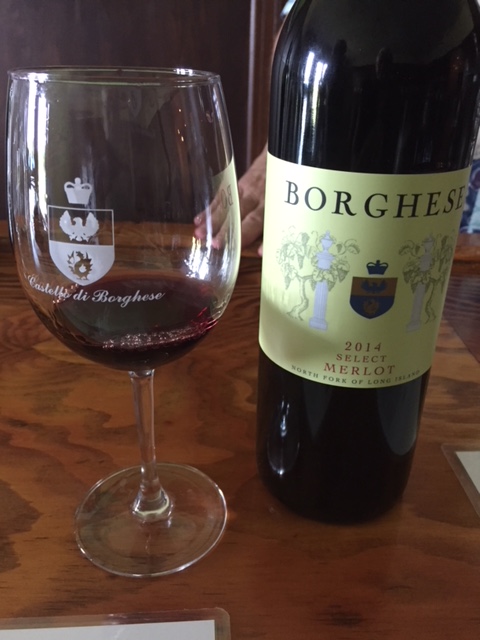 We like this one the best of the reds.  The aroma is somewhat earthy, with lots of dark fruit tastes.  It lacks the depth of a really good Bordeaux, though the menu says it is a “Bordeaux type” wine.

The actual truck–of which this is a painting–sits along Route 48, advertising Castello di Borghese.

Reasons to visit:  you are serious about wine and want to go somewhere that values that seriousness (as opposed to the “sup”—shut up and pour—places); the merlot/cabernet sauvignon blend (we buy a bottle), the Bianco di Pinot Noir, the Barrel Fermented Chardonnay (for those who don’t like barrel fermented chards); the art exhibits. 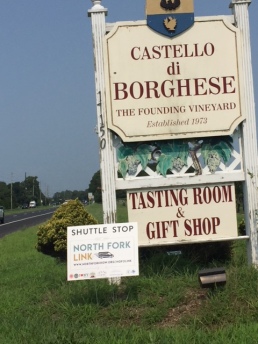