No, the name Long Island Spirits does not refer to ghosts. The distillery used to be called LiV, for Long Island Vodka, but now they have so much more. In addition to their vodka and a bunch of sorbettos made from vodka, they also carry gin and several whiskies. We had been there recently for a tasting, but we had visitors whom we knew would appreciate what LIS had to offer, so after a trip to the aquarium in Riverhead we headed to Sound Avenue. 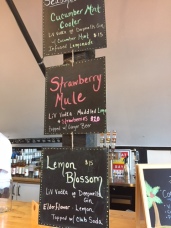 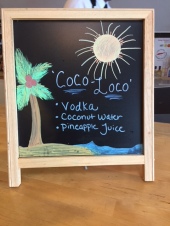 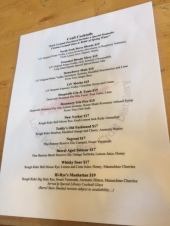 While our friends sampled whisky and sorbetto, we ordered cocktails and settled down at a table to enjoy them. And enjoy them we did. I had the Cucumber Mint Cooler made with gin and my husband had the Bloody Mary. My drink was, as its name suggests, crisp and cool, just right for the hot weather. It was garnished with a slice of cucumber. The Bloody Mary was also tasty, though it could have been a touch spicier, garnished with olives and a pickle.

Our cocktails, with a couple of sips already taken.

I have wanted to try their cocktails, and was happy I finally got to.
After the drinking, our friends bought the lemon and orange sorbettos and an espresso vodka, while we bought a bottle of Rough Rider Rye to replace the one we had finished.
Reasons to visit: in addition to excellent vodka, gin, whisky, rye, and sorbetto, some really nice cocktails. Too bad they don’t have a menu of bar snacks to go with them!

While we were there we saw a couple of people order cocktails and take them out to the deck, but it was awfully hot out there!

Downstairs you can peek through a window at the distillery.