I’ve read a number of articles about the price of a bottle in relation to the quality of the wine inside it, with many opining that it is not a simple relationship.  Often, what you are paying for with an expensive bottle is some measure of prestige or canny marketing, not necessarily the experience of drinking the wine.  My husband and I have had the good fortune and pleasure to go to events which included very expensive wines—vintage Dom Perignon, premium Bordeaux—which we certainly enjoyed.  But the question is, were they that much better than the $20 bottles of wine we often have with dinner.  Better, yes, but exponentially better?  Not so sure.  I was thinking about this because the wines at Bedell, while mostly pleasant and drinkable, are overall fairly expensive for what you get. 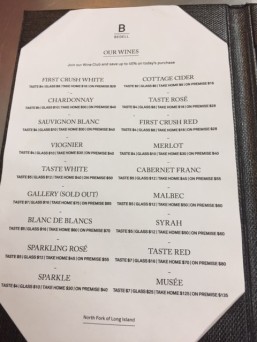 On a surprisingly chilly day (It’s been too hot to sit outside most of the summer, and then today it was too cold!), we headed to Bedell Cellars, knowing they have a pleasant tasting room, and not planning to sit on the porch—which was good, since the outdoor area was closed in preparation for a wedding.  We stood at the bar in the elegant black and white room and studied the menu, which didn’t take long since they only have one flight option, of five wines for $20, though you can add tastes of any other wines for $5-$7 each.  They are already sold out of two of their wines. 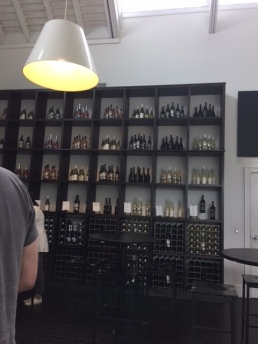 Our server was enthusiastic and chatty, though somewhat self-conscious about my notebook, even though I assured her that our main interest was in the wines.  She informed us at the end of our tasting that we could take our receipt and go over to Corey Creek, now owned by Bedell, for two free tastes of the wines on tap there, about which more later.

Just as I said, “This would make a perfect bachelorette party drink,” as if on cue, a group of women surrounding one who wore a headband that proudly proclaimed “Bride” entered.  Pink, bubbly, fruity, with a touch of minerality, this blend of 60% cabernet sauvignon and 40% merlot seems like it would be pleasant to drink.  However, we felt that ultimately it did not cohere and was a bit too sweet for us.  We still would prefer Croteaux.

The label is certainly pretty.

Although only a few wineries on the North Fork grow viognier, we just happen to have visited both Palmer and Kontokosta recently, and their bottles of viognier are $25, while at Bedell it costs $30.  We liked all three of the viogniers, and Bedell’s is no better than the others. This one has an orange blossom aroma with a slight metallic tang.  It has some nice fruitiness, and while I found it a bit too sweet my husband felt it had a nice balance between sweetness and minerality.  While we were discussing the wine, several people stopped in for glasses of wine, and two of them got the viognier, so clearly it is a wine people like.  My tasting buddy said it was a good summer wine, and I theorized that it could stand up to an assertive dish like bouillabaisse. 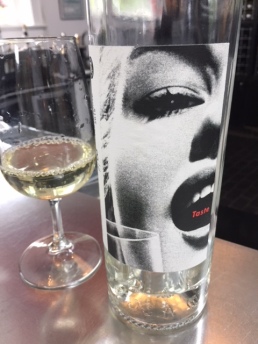 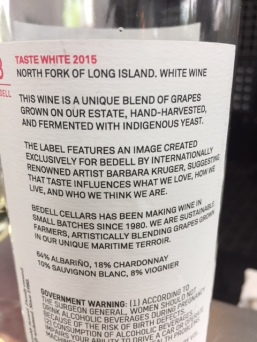 Both the wine and the image on the bottle are blends.  The wine mixes 64% albariño, 18% chardonnay,10% sauvignon blanc, and 8% viognier.  How is the image a blend?  According to our server, the artist did a composite portrait of five people to end with a face that looks like Marilyn Monroe.  (The owner of the winery sits on the board of MOMA, as we are always informed.)  The aroma and taste are both relatively complex and interesting, with smells of honeysuckle, baked pear, and something vegetal, maybe asparagus or grass.  I laugh and say it tastes like white grapes, because it seems funny to think that a drink made from grapes rarely tastes like grapes.  We also detect a hint of pineapple, and other fruits, plus pleasant acidity.  It’s not a white for sipping, nor would you want it with something very delicate.

The tasting menu describes this light red as juicy and ripe.  I say meh.  It is barely aged—six to nine months in neutral French oak—and has no depth and a very short finish.  It evanesces, as we say.  The aroma is of dark fruit, but the wine mostly tastes of minerals and a little fruit.  If you want a robust red, don’t pick this nothing burger!

It is a fairly generous pour.

I’m not too crazy about this red either, though I think people would find it easy to drink.  It’s a very simple, slightly cherry-flavored red, with no tannins.  It does develop a bit more flavor as it sits, and we think it might be better with something like lamb chops. 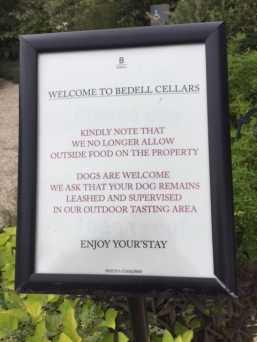 On to Corey Creek! 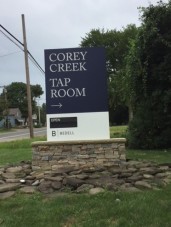 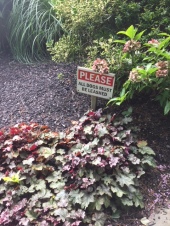 Just a little further east from Bedell is Corey Creek, which used to be a separate winery until Bedell took it over.  There they offer wine from a tap, like beer, and you can bring a bottle to be filled.  The building is pleasantly rustic, with a pretty back porch overlooking pinot gris vines.  The atmosphere is more informal than Bedell, and we saw families whose children were running around outside, plus several dogs on leashes.  The bachelorette party was here, too. 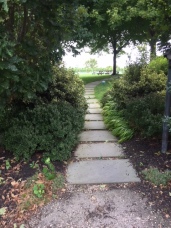 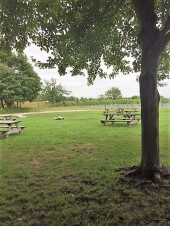 Many of the wines here are aged in clay vessels, an ancient method being revived, so we were interested to see if the cabernet franc here tasted any different than the one we’d just had.  They also offer Frosé, a frozen concoction of rosé, sugar, and water.  No, thank you. 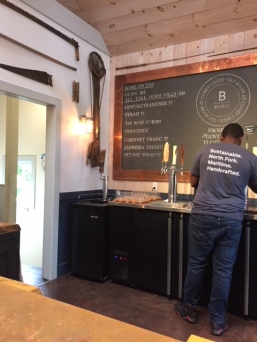 That’s the Frose in the containers.

For a syrah, this is a very light wine, with not much in the way of aroma or taste.  My husband says it has “forward tongue tingle.”

This is another not-much-there wine, though if you found reds challenging you might like it.  Our conclusion?  “Free is the right price” for these tastes. 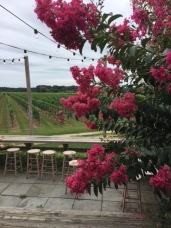 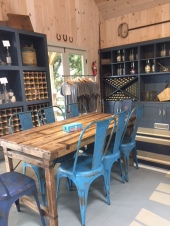 Reasons to visit:  elegant tasting room, artistic labels, the Viognier and the Taste White; Corey Creek has a pleasantly rustic setting and the novelty of wine on tap, plus a taste is free if you’ve been to Bedell.

Look how big those grapes are getting!