“We’ll have to stop quacking,” joked my husband, as we finished our tasting at Duck Walk Vineyards’ North Fork tasting room.  You see, the last time we went, in 2009, we disliked almost all the wines, including a red that tasted like ashes, and I had an allergic reaction (something I almost never have to Long Island wines, for some mysterious reason).  So we vowed never to return, and amused ourselves by quacking derisively as we drove past.  No more.  Though we didn’t like all the wines, there were plenty we did enjoy, and we had a great tasting experience. 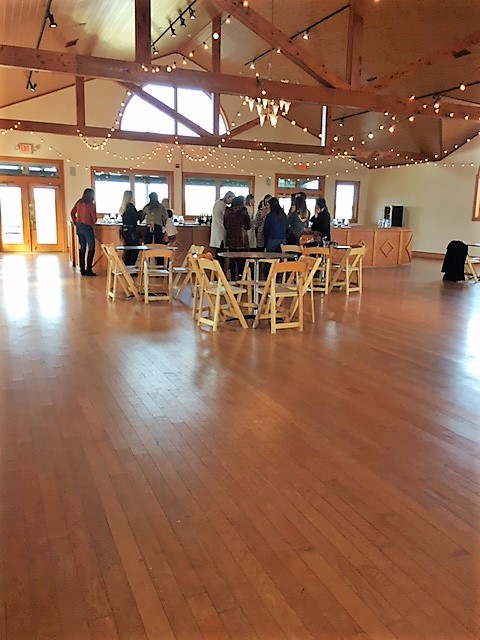 This tasting room is quite spacious, though the last time, when we came in the spring, we were in a different one that was even bigger.

Duck Walk, like Jason’s and Pindar, is owned by the Damianos family, and many of their wines are somewhat sweet for our taste, though numerous people like them.  And it is a family affair, with even a third generation possibly getting ready to join the business, according to our chatty and well-informed server.  It is always a plus to have a server who is really into the wines of the place where she works, and we appreciated our server’s enthusiasm for the wines and eagerness to share her preferences.  She also was happy with our respectful approach to the wines, and gave us some extra tastes to show off the depth of their collection. 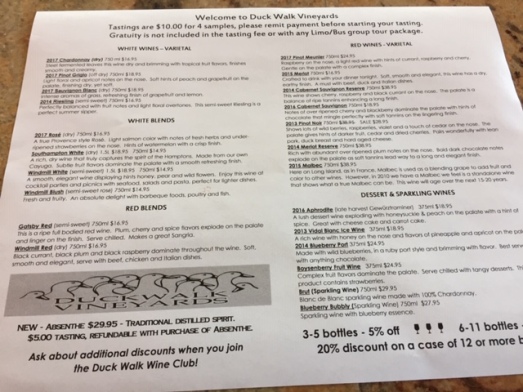 The tasting room we went into is to the right of the main entrance, where we had a tasting the last time, and is a smaller—though still quite large and airy—room.  A long bar dominates one end, past which are French doors leading out to the vines.  When we entered, a large group of young women were enjoying their tasting before heading back out to the limo, and the room became noticeably quiet when they left.  In the summer, we have often seen whole fleets of limos and buses parked outside, as Duck Walk is a regular on the limo circuit (another reason we haven’t been back in a long time).

Wine and anacks for sale.

Aside from feeling it was finally time to go back, I also was intrigued to taste their Absenthe, their new after-dinner “traditional distilled spirit,” whose name echoes that of the famous Czech drink, absinthe.

Their website notes that they have snacks for sale, though we were not offered a menu, and they do allow you to bring in “light snacks.”  It also says they are “pet friendly,” which I assume means in the summer, when you can sit outside. 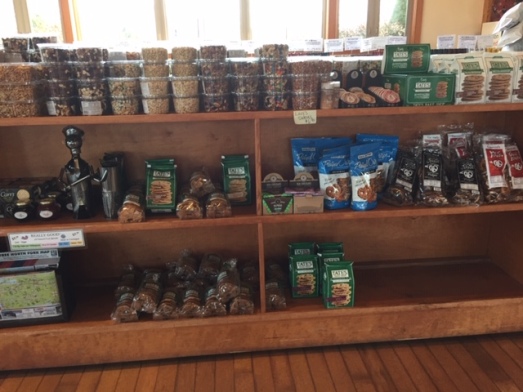 A tasting consists of four tastes for $10, which you pay in advance.  You then get four tickets, which the server collects after each drink.  Since the menu includes seventeen red, white, and rosé wines, plus seven other drinks in the sparkling and dessert categories, we decided to do two tastings and share as we went along.  Though you are free to choose any four, in any order, our server did give us the standard advice to drink whites before reds, and to follow the order of their listings on the menu.

Since chardonnay is so ubiquitous on the North Fork, I felt we should include it in our tasting.  This is their steel-fermented chard, and at the moment they do not have an oaked chard, though our server says they have had one in the past.  We agree that we both prefer steel to oak.  This one has a bit of a barnyard smell, and is a touch too sweet for us.  It has tastes of pineapple and guava with some minerality.  My tasting buddy opines that it is “wine for the skittish,” by which he means it is easy to drink if you’re not a big wine drinker. 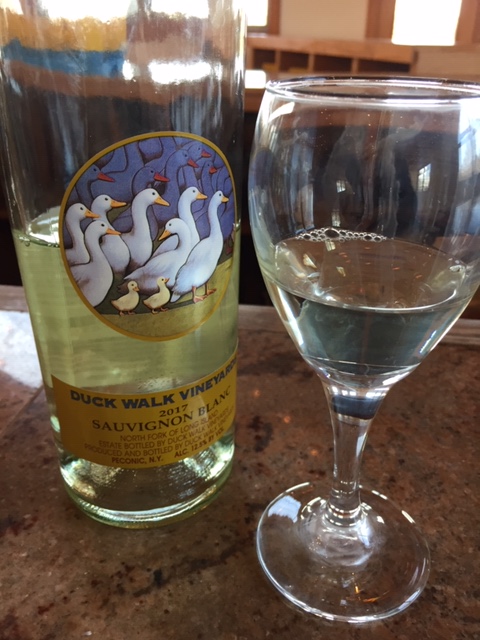 Nice.  I get a cut grass smell which my husband describes as “woodsy,” plus some rock or mineral.  The taste is fairly typical for North Fork sauvignon blancs, lemony and grapefruity, and would be fine with oysters.

When the labels do not feature ducks they feature Gastby-themed art, like this one of what the tasting room workers jokingly named the “Hamptons hooker.”

We admire its pretty pink color and Gatsby-inspired label, which features a young woman in flapper dress standing in front of a mansion and a 1920s car.  Her provocative pose has led the winery workers to dub her the “Hamptons hooker.”  Made from the pinot meunier grape, this has a slightly funky aroma, plus the expected strawberry.  The taste reminds me of a vodka-infused watermelon I once sampled at a party (I was young.), with some sweet strawberry and lemon notes.  This would be a fine summer sipper, though it is a bit too sweet for us.

According to the menu, this is made from the cayuga grape, which is often used upstate.  As we feared, it is too sweet for us, while also being light and not complex. I contemplate dumping the rest of our taste.

Since Duck Walk is the only vineyard that grows this grape, we decide we need to start our tasting of the reds with this wine.  My tasting pal and I agree that this smells like berries, though I say blueberry and he says raspberry.  It is a light, fruity summer red, good with barbequed chicken.  It reminds me of a Beaujolais.  This label also features an upper-crust Gatsby-esque theme, with formally clad horse riders.

This cab doesn’t have much aroma or taste.  There is a slightly funky smell.  The wine itself is light and dry, with some tannin.  It would be okay with a burger, though I generally prefer beer with burgers.

Do you see the duck reference in this picture? I got it!

Power of the book strikes again!  Our server, with whom we have been having enjoyable conversations about the North Fork vs. the South Fork (where she often has to travel to work in the South Fork tasting room in Water Mill), gives us an extra, a taste of the high-end cab sauv.  And it is really good!  Lots of dark fruit taste, the kind of tannins that make me think it could age even more, and some depth and interest.

Again, the aroma is a bit funky, plus the usual cherry smell.  This is a dry, drinkable merlot, not overpowering at all.  My husband says there’s “not a lot of stuff going on.”  It’s a fairly typical North Fork merlot, with some cherry taste.  It would be fine with pasta.

Once again, we get an extra.  This time, a taste of the reserve merlot.  The aroma is complex, with notes of plum, cherry, and tobacco (which my husband calls ash).  However, the aroma promises more than the taste delivers, though this is a good, dry, drinkable red.  Not a lot of tannins.

Although malbec is most often used as part of a mixture of grapes, I tend to enjoy it on its own as well.  The color of this is a beautiful dark red, and the aroma is also dark, of dark fruits like plums.  We like the taste, which is dry and tannic, with enough fruit that it would be fine to sip or have with steak.

The White Port is so new it wasn’t on the menu.

I can’t tell you the price of this because it is not yet on the menu.  Another extra treat!  Duck Walk often features their blueberry port, which is actually made with blueberries, so this is a departure for them.  The aroma is nutty, and it would actually taste good with nuts.  I taste some gooseberry taste, (and then we decide that next summer when Briermere sells gooseberries we will have to buy them again).  Nice after-dinner sipper.

We happen to have a bottle of absinthe we hand imported from the Czech Republic a while ago, so as I tasted this Duck Walk version, I looked forward to comparing it to the historical drink.  Supposedly, absinthe used to be made with wormwood and was highly addictive as well as causing hallucinations.  That’s no longer the case, so it is safe to sip.  In the Czech Republic there is a whole ceremony to drinking absinthe, involving mixing sugar and a bit of absinthe on a spoon, igniting it, and then, as the sugar liquifies, blowing out the flame (important step!) and pouring it into the glass.  No sweetening is necessary with the Duck Walk Absenthe, which is quite sweet, almost syrupy, and tastes very strongly of black licorice.  If you like Sambuca, you’ll like this.  After I went home—and recovered from all that drinking!—I tried our absinthe.  It is not at all sweet or syrupy, though it does have a licorice taste plus a beautiful green color, and is quite strong (70% alcohol).

Reasons to visit:  it is winter, and you want to check out a winery that is too crowded in the summer; the Sauvignon Blanc, the Rosé, the Pinot Meunier, and the Cabernet Sauvignon Reserve; they allow dogs (outside) and snacks; pretty labels; reasonable prices; beer on tap in case you’re with someone who doesn’t want wine (why?).