It was the day before Halloween, and oddly warm, when we drove over to Macari. We had the tasting room to ourselves, so it wasn’t surprising that there were no pre-made cheese trays available. (No outside food allowed.) However, we could have bought any package of cheese on display, plus some crackers, and our server would have supplied us with a knife and cheese board.  We decided to content ourselves with a bag of very tasty black truffle-flavored potato chips. Then I worried that they were interfering with the tasting, so I requested a glass of water, which was quickly forthcoming.

Cheese and charcuterie for sale.

and even more snacks

The tasting room on Bergen Road is large, with a beautiful stone fireplace on one side, and ample displays of their wines all around. There is also a second large room filled with tables, and seating on a veranda off to one side. We stood at the bar and shared an Estate tasting, of five wines for $30. The other flight is called Vintage, and also includes five wines for $30. My tasting buddy complained that it was a small pour, though I noted that the glass was large. 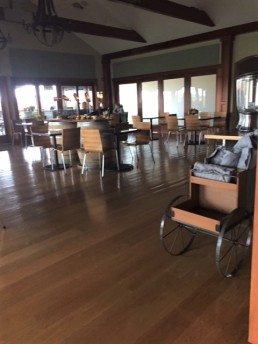 When you stand at the bar you have a clear view of the huge steel vats in the wine-making area, and we watched with interest as a worker tethered himself with a safety harness before checking on one vat. Makes sense, I suppose. What a way to go, drowned in a vat of wine! 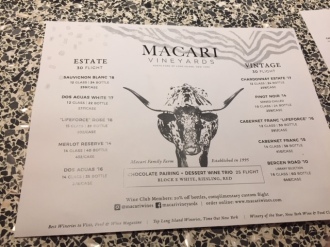 In general, we have liked Macari wines, and often buy a bottle with dinner in local restaurants. Today was no exception, though in general we liked the whites better than the reds, and really liked the rosé we tried.

Why Katherine’s Field? All our server could tell us was that the grapes for this wine all came from an area of the vineyard called Katherine’s Field, and that it is the part closest to Long Island Sound. Perhaps that closeness to the water accounts for the slight note of saltiness I detected. The wine is light and easy to drink, with tastes of green apple, mineral, and pineapple. Like many NoFo sauvignon blancs, it would go well with local oysters. Good.

Dos Aguas is, of course, a reference to the two waters which surround the North Fork: the Sound and Peconic Bay. This is a blend of 52% grüner veltliner, 27% viognier, 10% sauvignon blanc, 7% pinot gris, 3% friulano, and 1% gewürztraminer. It smells very much like honeysuckle, which I think might be due to the grüner, and also gets some of its fruitiness from that. My husband thinks it is too sweet, but I argue what he’s tasting as sweet is actually fruitiness. It has some lemon taste, as well as gooseberry. I would buy it, and it would go well with spicy food, but he doesn’t like it as much as I do.

Even visually, you can tell this rose is more robust than most.

The term “lifeforce” in the title of a Macari wine refers to the fermentation method used. Instead of steel or wood, these wines are fermented in a concrete “egg.” They used to explain that egg on their website, but I couldn’t find that information now. In any event, this rosé is made from cabernet franc grapes, and was described by our server as their “fall rosé.” It is heavier and darker than a typical rosé, and as we discussed it he told us that what had happened was that in 2018 they were not happy with the way the cabernet was turning out, so rather than make a red from it they decided to turn it into a rosé. We are happy they did, as we quite liked it. Though it has some typical strawberry aroma and flavor, it has more oomph than many rosés. We bought a bottle. I think it will go great with seared rare duck breasts, which we get at Bayview farm stand.

By this time our server–a bright young man–had figured out how I like to pose these photos. We had a nice chat about how he has learned to like wine.

Our server tells us this in aged twenty months, 9% in new French oak, so it is not super oaky or tannic. It smells fruity, like black cherries. The taste is soft and pleasant, but rather unidimensional. At that price, I’d want a more exciting wine. However, it is quite drinkable. 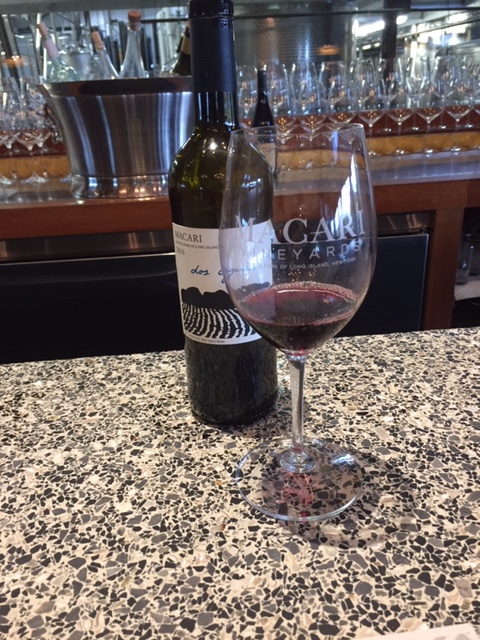 This is another blend, this time a Right Bank Bordeaux blend of 62% merlot, 14% cabernet sauvignon, 10% malbec, 8% petit verdot, and 6% cabernet franc. I like the aroma of red raspberries, but again the taste is good but not exciting. Dry, soft, with no tannins, this is an everyday type of red that you could even have with roast chicken. It would not stand up to a steak. 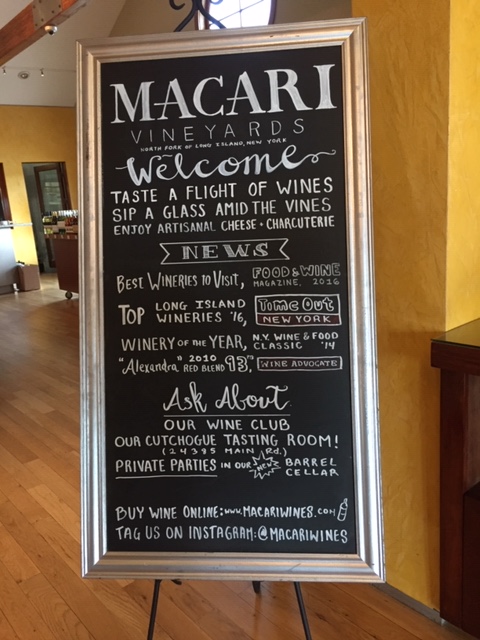 Reasons to visit: spacious tasting room; the sauvignon blanc, the Dos Aguas white, and the Lifeforce Rosé; we often get the Sette in restaurants, a nice blend of half and half cabernet franc and merlot; no food allowed, but they do have a large selection of snacks and will do cheese trays on busier days.

The grapes have been picked, and soon the leaves will be gone as well, leaving the vines bare until spring.