Don’t be fooled by that blue sky–it was cold!

The starkly simple sign outside leads you into an entry area that is almost Zen-like in its simplicity. The tasting room is similarly pared down to essentials, as are the wines. Even the bottles share this aesthetic, looking like examples of modern art. Our friendly and well-informed server, Tina, tells us that an attractive stair-step design on the labels has a symbolic meaning. The wines are named “Scielo,” which a neon sign, the only décor in the tasting room, informs us means Heaven. The steps are a route to the heaven you find in the bottle.

The Rivero González family bought this winery and vineyard from Martha Clara in 2018, but they have been winemakers in Mexico since 1998. We had waited to check them out until we figured they had time to make their own wines, which they have. The only hold-overs from Martha Clara are some of the reds—and Tina herself, who greets arriving wine club members like old friends. She tells us that the new owners want to keep the family-friendly atmosphere of Martha Clara, while putting their own stamp on the wines and décor. For example, dogs will be allowed outside on the grounds (though today there is one in the tasting room! Well, it is certainly too cold to hang around outside.). 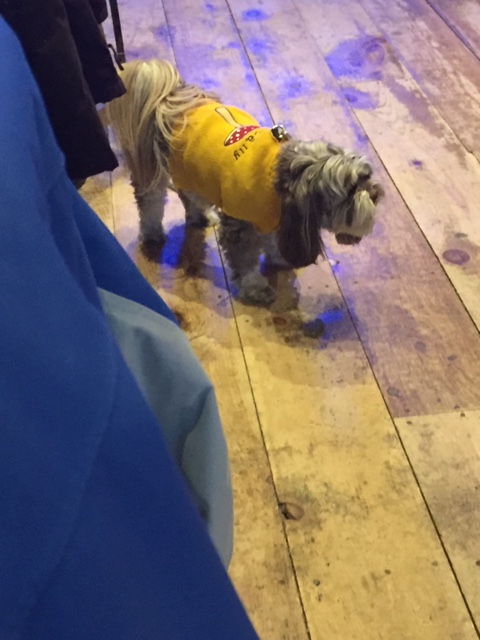 This pooch was so well-behaved we didn’t even realize she was there until someone greeted her.

I ask Tina about snacks, and she shows me a menu which is available on weekends in the winter, and every day in season. (No outside food.) Meanwhile, there is a refrigerated case and various snack items in the shop area, so you can make a DIY snack. We decide we are not that hungry, and anyway, each tasting comes with a little dish of very tasty crackers.

The snack menu, which is available on weekends in the winter. 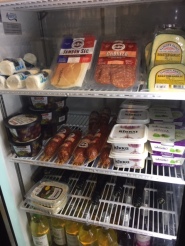 You can make a DIY snack. 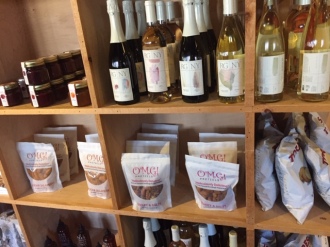 The tasting menu offers a choice of three different flights: the Scielo selection of four wines for $17, four whites for $20, or RG Selection of higher-level wines, four for $22. The final choice on that menu is a Martha Clara red, but Tina, noting that we have been to Martha Clara, says she could substitute the RG Tinto if we prefer. We decide to go with the Scielo flight.

I am happy to learn that this is a primarily steel-fermented chard, with just 2% oaked. I find in general that I prefer steel chards, but a little bit of oak adds depth and a nice mouth feel. It has an aroma of ripe apples and flowers, and tastes like a Granny Smith apple as well. There’s also a touch of lime. My tasting buddy insists that it is slightly sweet, but after some discussion we realize that his taste is influenced by some residual sweetness from the cracker he munched. He says this would be a good seafood wine, and I agree, though I think a seafood in cream dish would go best. 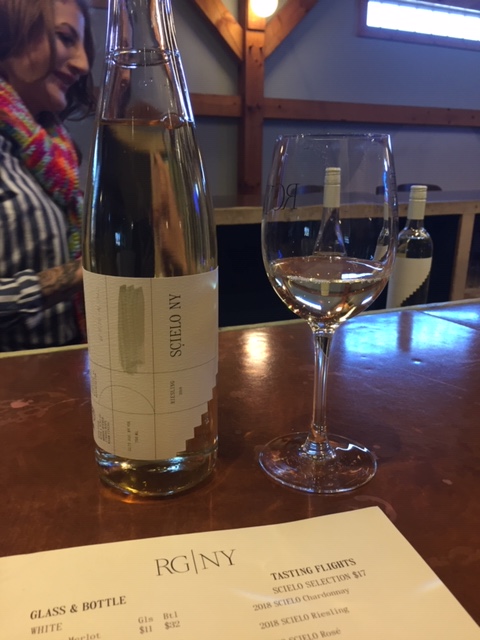 Before we opted for this flight, I asked if the riesling was sweet or dry, and Tina reassured me that it was dry. She wasn’t kidding. It is bone dry, and very light. The aroma is of honeysuckle and metal, and there’s a touch of metal in the taste as well. Like touching your tongue to a pole? Well, I’m not that dumb. I also taste pears. We get into a discussion about how the new wines are very dry, whereas the Martha Clara wines tended to be more on the sweet side. Some former customers are unhappy with the new taste, while we prefer it.

The stair step pattern on the label has a symbolic meaning.

Yum. This is a blend of 48% merlot, 32% malbec, and 20% cabernet franc, and the complexity of that blend shows up in the flavor, which is more interesting than a standard rosé. Tasty, says my husband. It has the strawberry aroma one would expect, and in addition to some strawberry flavor a definite note of lychee. We decide to get a bottle to go with the scallops we bought earlier at Braun’s.

Power of the book—she was pouring this for someone else, so she offered us a taste of this white wine made from merlot grapes. Nice. It tastes like a cross between red and white, light and drinkable, with an aroma of wood and leather and white cherry taste.

Our server compares this to a Beaujolais, and it is light like a Beaujolais, though it is made from a Bordeaux blend: 43% merlot, 37% cabernet sauvignon, 10% petit verdot, and 10% cabernet franc. I would guess that they were in a hurry to get out a red of their own, because we think this could benefit from more aging. It has a nice cherry aroma and taste, but no depth and some tannins. It is very young, and I could see drinking it with meatloaf or hamburgers.

There’s just a little bit left in this bottle, not enough to give anyone a regular taste, so Tina asks if we’d like a sip of this. Of course, we would. I get spice and leather, not much fruit. Again, I think this would benefit from more time, and we resolve to come back in a year or so to see how the wines have developed.

There’s a very large side room.

Reasons to visit: A chance to try a new place; very roomy surroundings, in case you are with a group; the rosé, the White Merlot. One note—the bar has almost no overhang, so there’s nowhere to put your knees when you sit there, and the stools are rather uncomfortable. Perhaps they will fix that in the future.

From the outside, you con’t tell that there are significant changes both inside the building and inside the bottles.

But there are still some Martha Clara wines available for purchase.

The gift shop has many fewer items than it used to have.