After what seemed like forty days and nights of rain, the sun made a brief appearance on Wednesday, so we took advantage of the pleasant weather to get out of the house. We took our friends to the Riverhead Aquarium, where it was actually nice enough to sit outside and watch the sea lion show and wander around to see the playful otters and penguins, as well as the other exhibits inside. We all stood mesmerized at the shark tank as those giants glided past the windows, and tried to pick out each variety of colorful fish in the coral reef tank. The butterfly room felt like a brief visit to the tropics. 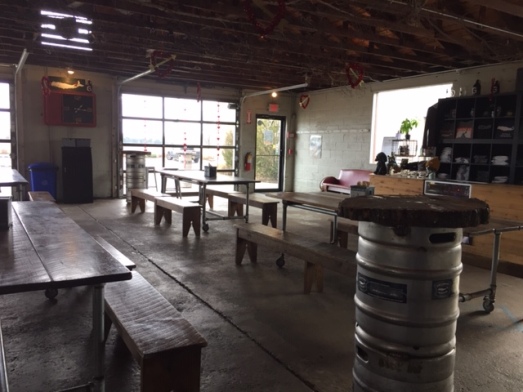 After a couple of hours, our feet were tired and our mouths were dry, so we headed to Greenport Harbor Brewing Company’s Peconic location (the original place in Greenport has limited hours in the winter, like much of the rest of the town). It was the least crowded we’ve ever seen, with only a few people in the tasting room. Usually, you have to go into the room off to the side to order food, but today the man behind the bar was filling all orders, so we ordered a giant pretzel. They actually have real food, but we were planning to go out for an early dinner, so we didn’t want to eat too much. We did, however, end up getting a second pretzel! 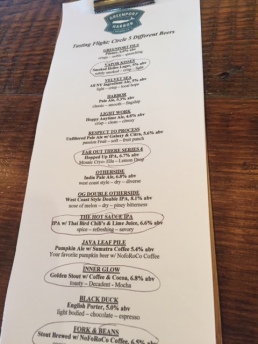 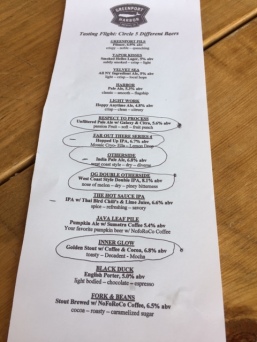 At the bar you are presented with a printed list of the available beers, and you simply circle your five choices, which are then handed to you in the form of small glasses set into a wooden carrier shaped like a whale/Long Island (their logo). There’s plenty of beer for two people to share. Our friend chose some of the same beers we did, but also some different ones, so we were able to try eight beers in all. Our designated driver was happy with a Boylan Black Cherry Soda (made with real cane sugar). 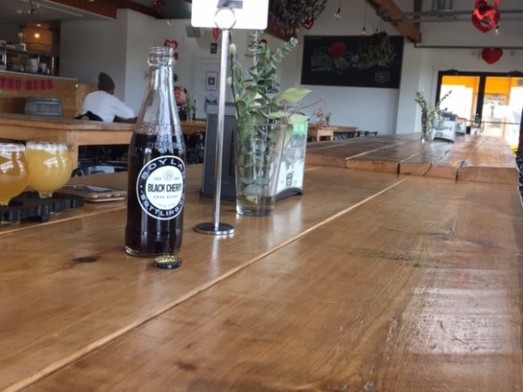 Soda for the designated driver.

We took our flights to a table looking out at the yard, enjoying the sunny day.

This room was also empty.

This is described on the menu as a “smoked Helles Lager,” and indeed it does have a slight aroma and taste of smoke. It is a refreshing, post-lawn-mowing-on-a-hot-day type of beer. Light and crisp. 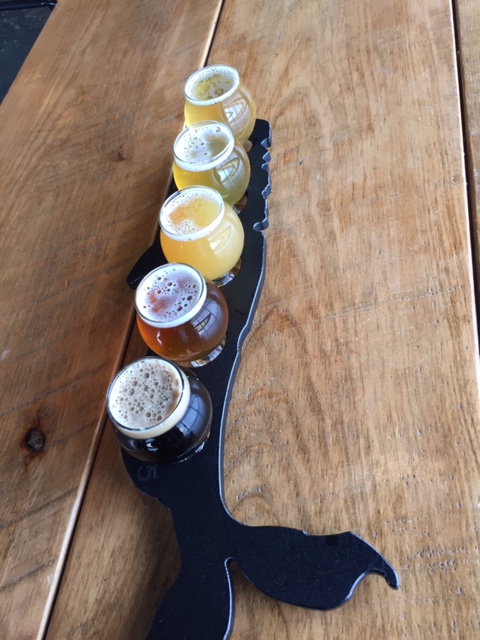 The flight I chose. You drink them in order, from light to dark.

“Unfiltered pale ale with Galaxy and Citra,” reads the menu for this one, but I think it could just as well have said “grapefruit juice,” which is what it smells and tastes like. I’m glad it was my friend’s choice rather than mine, since I don’t care for this type of beer. 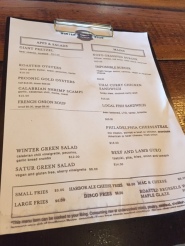 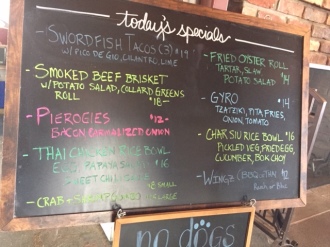 I guess the “far out there” refers to the very hoppy quality of this IPA. Although I sometimes don’t like hoppy IPAs, I don’t mind this one, which just begs for a snappy hot dog accompaniment. It has some bitter lemon taste, but also warm grain taste.

No, the name does not refer to what you should drink this with, but what it is made with: Thai Bird chili peppers! My friend compares it to biting into a jalapeno, and opines that she would rather cook with it than drink it. For example, she continues, you could braise chicken in it and then use that to stuff enchiladas. I think it is fun to drink, and would be good with nachos that were more cheesy than spicy. 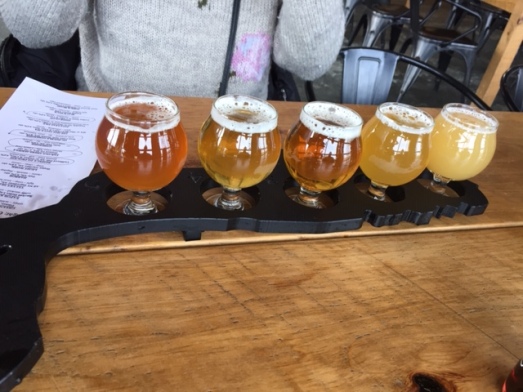 I’ve had this before, and find it pleasantly piney, dry and crisp.

As the name suggests, this is a more intense version of the Otherside IPA (whose name refers to the fact that the hops come from the West Coast). I taste grapefruit pith as well as pine. Preferences are so personal—My friend likes it and I do not! Happily, it is also from her flight, as one sip is plenty for me.

Although I’m not sure I agree with the menu’s description of this as “decadent,” I can certainly taste the coffee mixed with golden stout. However, they also say cocoa is involved, and I don’t taste that at all. This is a sit-in-a-pub and sip stout, and goes down easily. The coffee flavor is not super intense.

On the other hand, this has robust espresso coffee flavor, and is made with NoFoRoCo coffee. It has an aroma of roasting coffee as well. You could have a glass of this and a glass of the Respect to Process and call it breakfast, I joke—coffee and grapefruit juice. It is tasty, but our friend thinks it could have more body to it. True, it is not a real heavy stout. Our friend says she likes a brewery where there are a couple of reliably good beers you can get any time, and I tell her the Harbor Ale and Black Duck Porter, both often available in local markets, are both good choices.

I like the art they commissioned for their labels.

Reasons to visit: lots of good beers; a roomy space (formerly a car dealership) which nonetheless can be very full on busy days; of the ones I tried today, my favorites were the Hot Sauce IPA (definitely not for everyone), the Inner Glow Stout, and the Fork & Beans Stout; big, hot, soft pretzels served with cheddar sauce and mustard; a menu of “real” foods if you want lunch. 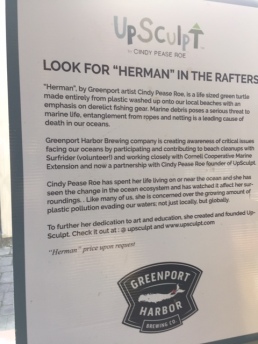 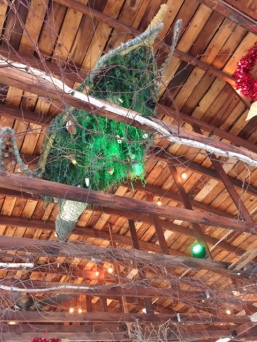