The logo represents a barn swallow, which has several symbolic meanings.

After the fourth or fifth dog entered, owner in tow, our son-in-law turned to us and said, “I feel as though we should have brought a dog with us.” We had arrived at the North Fork Brewing Company tasting room around lunch time, and almost every person who entered seemed to have a sweet, well-behaved dog with them. (I stopped counting when I got to six!) The room is well adapted to canine visitors, since the brewery is located in a former fire station, with concrete floors and an industrial vibe. Many of the visitors were having a glass of beer and a sandwich, from the food truck outside, while others, like us, had opted for a tasting. 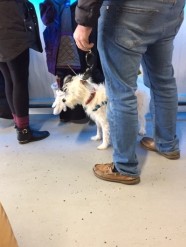 The last time we went to North Fork was exactly a year ago, and that time, too, it was with our daughter, son-in-law, and two granddaughters after a couple of hours at the Safari Play Space in Riverhead. The girls settled in with coloring books and books, and split a root beer (which W. said went very well with her orange lollipop from Safari), while we tasted and discussed. We decided that the beers had improved over the year. The last time we felt that while we appreciated the creative choices they were making, there was also no beer we wanted to just sit and drink. In contrast, this time there were several we could see getting in a growler, and in fact our son-in-law took home a growler of “It Must Have Been Light, But It’s Darker Now.”

A flight is four glasses of your choice from a list of eleven beers on tap for $9, and comes in a little muffin tin. You write your choices on a little card, and they are put in the pan in number order, with the numbers on the bottom of each spot.

The number in the bottom of the muffin tin which holds your tastes.

After a little while, we got sandwiches from the food truck, which had a limited menu because, we heard the person in it explain, they had not expected to be open this day. Our daughter is lactose intolerant, so she was delighted to try the vegan cheese and pesto sandwich, which was very tasty ($10). My husband and I shared a grilled cheese sandwich, which was a rather ordinary offering of grilled cheddar on white ($6). The brewery also sells bags of North Fork potato chips for $3. 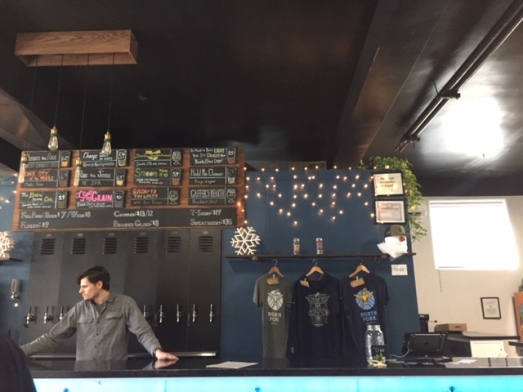 In between sips, I chatted with the server, who explained that the logo represents a barn swallow. The barn swallow symbolizes their commitment to be a farm brewery—they grow many of their own hops—and also was a tattoo sailors would get to symbolize their home-coming. 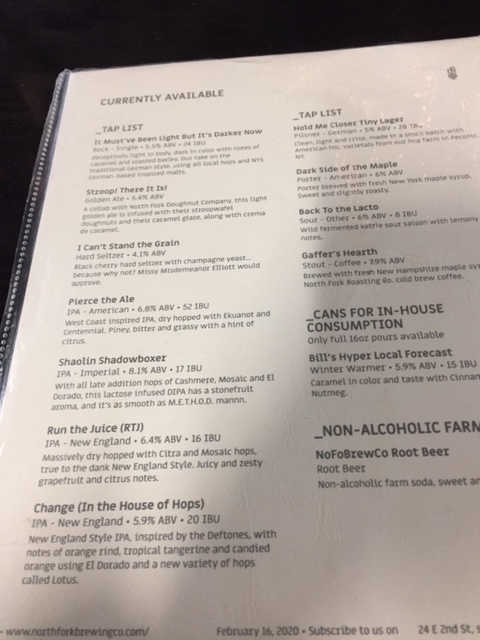 This is a dark beer for someone who is making the transition from being a light beer drinker to darker beers. It is dark in color, with a caramel aroma, pleasantly bitter, with a refreshing, complex flavor, lighter than most dark beers. A German bock style, our son-in-law says it compares favorably with bocks he’s had in Germany.

The flight I shared with my tasting buddy.

Change indeed. This IPA smells and tastes like mandarin oranges. My daughter and I agree on what to drink it with—I say a po’boy sandwich and she says a basket of fried clams.

They have their own food truck, called the North Fork Chewing Company, parked right outside the tasting room.

I have liked porters ever since I first tasted one in an English pub many years ago, but I think this one is a bit too sweet. Another of our group says it is “a good porter.” I think it needs more body. You can definitely smell and taste the maple syrup used in making it.

The menu is sometimes more extensive, but they hadn’t expected to be open on a Monday. I suppose they forgot it was a holiday.

On the other hand, I really like this stout, which is also brewed with maple, plus North Fork Roasting Company coffee. It had a delicious coffee flavor and aroma, with just the right amount of bitterness. Our son-in-law describes it as a “breakfast stout,” and reminisces about a place he went to when he was in college that would serve at breakfast a glass of stout with an egg beaten into it. Really? Much discussion ensues over whether that is a good idea or not.

The other flight our group had. You can see how cloudy Run the Juice is.

I’m at the end of my flight, but our daughter and son-in-law have a couple of different choices in their flight, and this is one of them. This is a light, fizzy, German pilsner. Refreshing, but not to be sipped on its own.

Like many IPAs, this smells and tastes like grapefruit, though this one also has a touch of funkiness. It is cloudy in color. Refreshing.

You can peek into the brewery itself.

Reasons to visit: you want to go out for a beer and not leave your dog at home alone; all the beers, but especially It Must Have Been Light, But It’s Darker Now; Gaffer’s Hearth; Hold Me Closer; they have their own food truck; convenient to downtown Riverhead.  Note:  Google map directions are not accurate!  They tell you you have arrived when you are actually around the corner from the parking lot.