Anthony Nappa is the winemaker for Raphael, but he also has his own label, which he sells through the tasting room on Peconic Lane.  Peconic Lane, by the way, is one of the few places on the North Fork where you don’t need a car to visit multiple wineries.  If you start on Sound Avenue and head south, you can visit The Winemaker Studio, Peconic Cellar Door right next door, Sannino Bella Vita near the end, and finish with Greenport Harbor Brewing Company’s tasting room, where you can also get snacks or a meal, on the corner of Main Road. 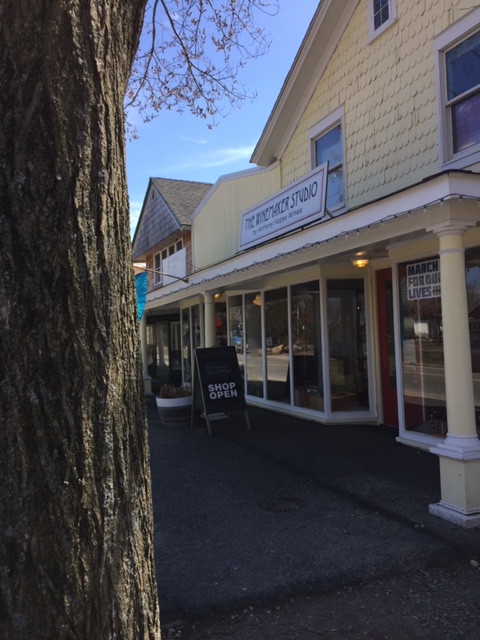 As you look down the street, you can see Peconic Cellar Door right next to The Winemaker Studio.

The Winemaker Studio is housed in a cozy little store front site, augmented by a few outdoor tables in the summer.  Some nice local art is hung on the walls.  This is not a place for large groups, but if you want to taste some interesting wines with a couple of friends, this is a good spot.  The menu offers five tastes for $15, and $3.50 for any additional tastes.  They also always have a couple of local beers on tap, rotating the selections seasonally.  Today they had one from Moustache Brewery in Riverhead and another from Greenport Harbor down the street.  As our congenial and genial server noted, if he ran out he wouldn’t have far to go for a new keg.

The beer taps and a sign about their club. A member came in for a pick-up while we were there.

We decided to share one tasting, which was fine, as the servings were generous. 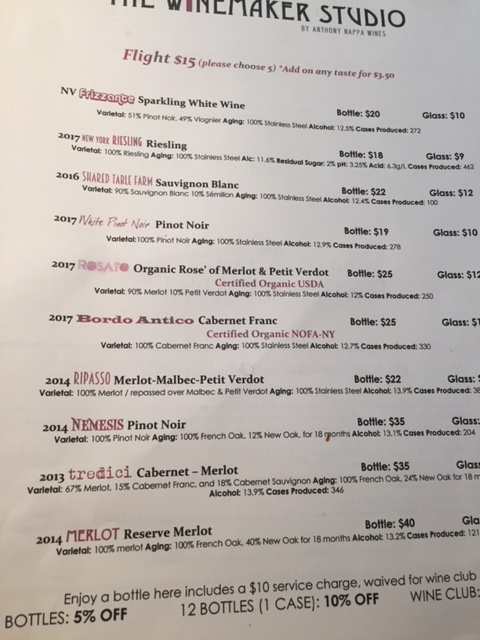 There were some interesting choices on the men we did not try. Maybe next time…

Why the name, I wanted to know.  Our server replied that this is a limited production wine, with only enough produced for wine club members and those who come to the Studio.  The fruit is from Raphael.  Nappa doesn’t have his own vineyard, and so he buys his grapes from several different growers.  This wine is made from 90% sauvignon blanc and 10% semillon grapes.  The aroma is vegetal, with me suggesting asparagus and my husband suggesting Brussels sprouts.  The wine itself is dry, with lots of minerality and a touch of citrus at the end.  My tasting buddy says that this is the style of sauvignon blanc he likes.  Steel fermented, it would make a great summer wine to drink with oysters.

As you can see, this looks like a rose.

The menu describes this as a white wine made from red wine grapes.  Or one could call it a rosé.  They used to call it Anomaly, until a winery of that name in California sued them.  The wine has more heft than the usual rosé, with a slightly funky aroma with some candy smells.  The taste combines strawberry and citrus and minerals.  We decided it would be better with food than by itself, and could stand up to more flavorful foods than a typical rosé.  We buy a bottle to have with barbeque this summer. 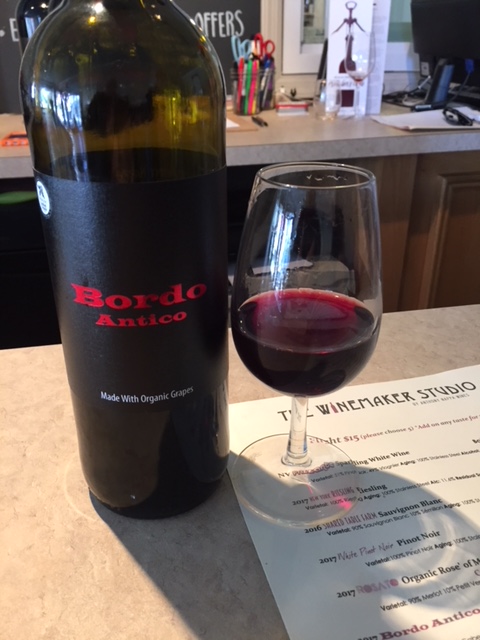 We were interested to taste this one for several reasons.  It is made from certified organic grapes, grown in Calverton, though the wine itself is not completely organic, since they do add some sulfites.  Also, it is aged in steel rather than oak.  Made from 100% cabernet franc grapes, it is a light refreshing red and would, we suggested, be perfect with barbequed chicken.  Our server agreed, and noted that he sometimes serves this chilled, like a white.  The aroma is intriguing, with a touch of forest floor.  The wine is dry, with some minerality, and not tons of fruit.

Served in a bottle with an ominous black label, the wine is simply named nemesis because the pinot noir grape is notoriously difficult to grow on Long Island.  If you’re interested in learning about growing conditions on Long Island, and why it is better or worse for certain grapes, you might enjoy reading the page on the Winemaker web site titled “Growing Conditions.”  On it, Nappa evaluates in detail each season since his arrival here in 2007.  The grapes for this one come from Macari and Peconic Bay (which no longer makes its own wines).  We like the aroma, which combines dark fruit and spice and tobacco.  We also like the wine, which had some cherry flavor.  It’s also a tad on the light side, so I wouldn’t pair it with steak, but it has some acidity and spice with might go well with lamb chops.

To say 2013 and Tredici is somewhat of a tautology, since the name refers to the year in which the grapes were harvested.  And a very good year it was.  A blend of 67% merlot, 15% cabernet franc, 18% cabernet sauvignon, aged in French oak, this is my favorite wine of the day.  Fruity kazooty, I say.  Well, I did mention that the servings were generous.  Lots of rich fruit flavors and enough tannins that I’m sure, as our server points out, it could age for several more years.  I could drink a lot of this.  Yum.  We buy a bottle.

In the summer they put tables and chairs like this outside.

Reasons to visit:  pleasant intimate setting; all the wines, but especially the White Pinot Noir and the Tredici; no food, but you can go down the street to the Greenport Harbor Brewing Company afterwards; beer for a non-wine-drinking friend; dogs are allowed outside in the summer; knowledgeable and genial server with a real passion for the wines; we are served glasses of water along with our tasting, a nice touch; Peconic Lane and its mini winery-walking tour. 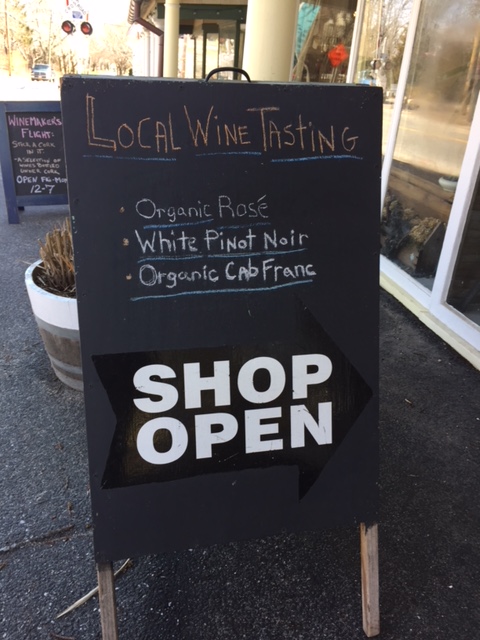